Worth highlighting today, even if I am only getting one or two dupes in these pulls of cards, always nice to have a home for them all lined up. 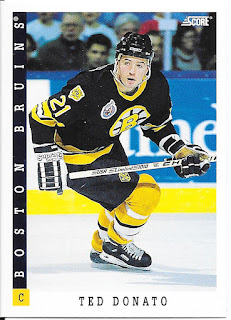 I pretty much send all my Bruins dupes or unwanted cards along to local Toronto collector Jeff Scott who I have met through this blog and traded with on and off a few times, which has been amazing, and hopefully has helped his collection as much as mine.
So, although I don't need Donato, he will have a happy home regardless.

These ones won't be going anywhere as they do well to keep moving up the needle on the Toronto team cards from this lot. I checked in on the Santa Lot, which ended up with about 240 Toronto keepers while here I'm at about 175 - so on about the same path, though looks like, as expected, this lot will be bigger. 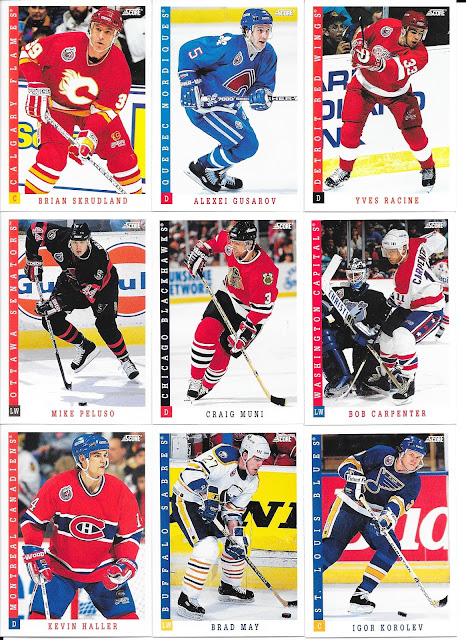 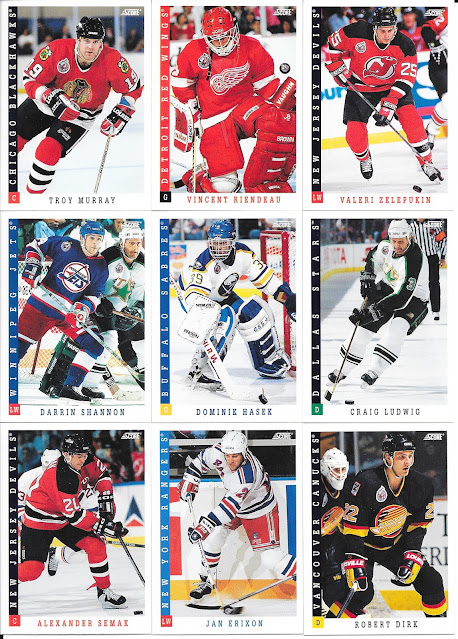 There have been some stars missing going through these cards, but there's a hall of famer here with Hasek. This is just before he started to really take off as he was supposed to be the number one goalie in Buffalo in 1992-93, but ended up supporting Grant Fuhr - but he was just biding his time. 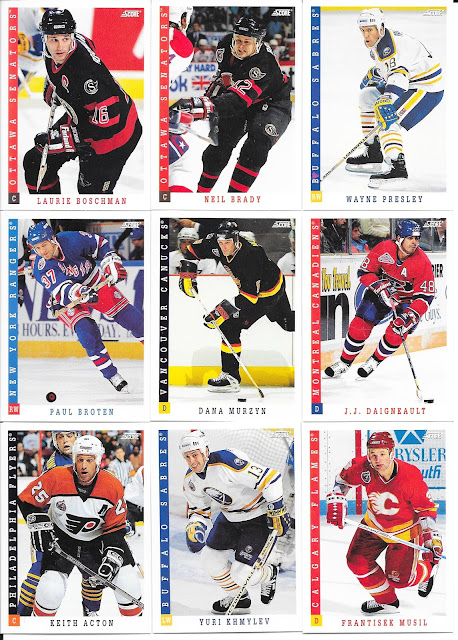 Interesting - didn't notice it before, but do now - that Wayne Presley card will go to the error binder with that nice ink spot in the bottom left corner (pink on the blue). 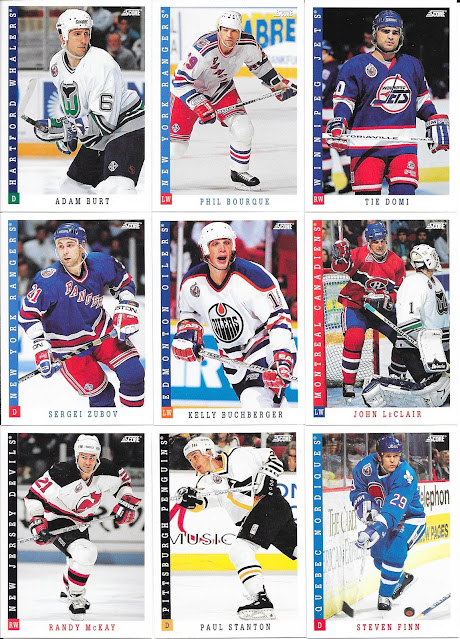 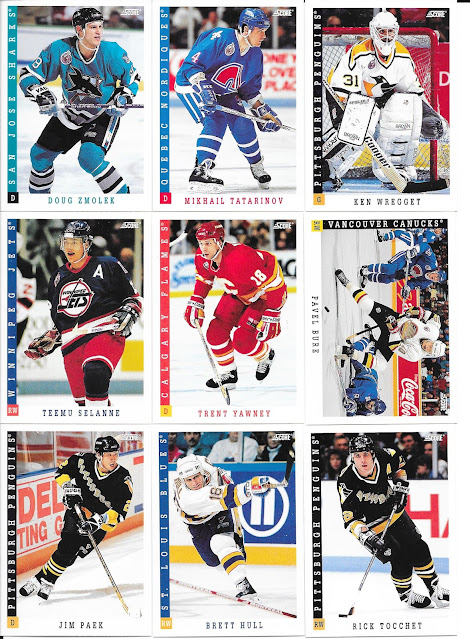 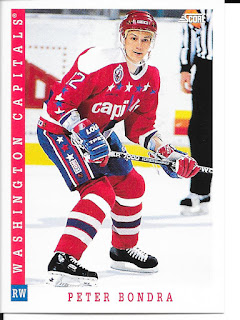 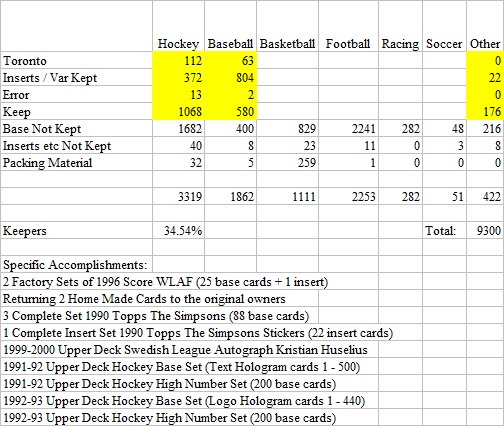 Before we go, another TCDB trade to share. As you can tell, I have been a bit busier with April over and a little more time for cards and trades and such.
Nathan-John-Mercer is a first time trade partner on the site, from the far away land of Toronto. I'd probably normally have tried to figure out an in person meet up, but we aren't quite there in the world today. So, PWE it is. 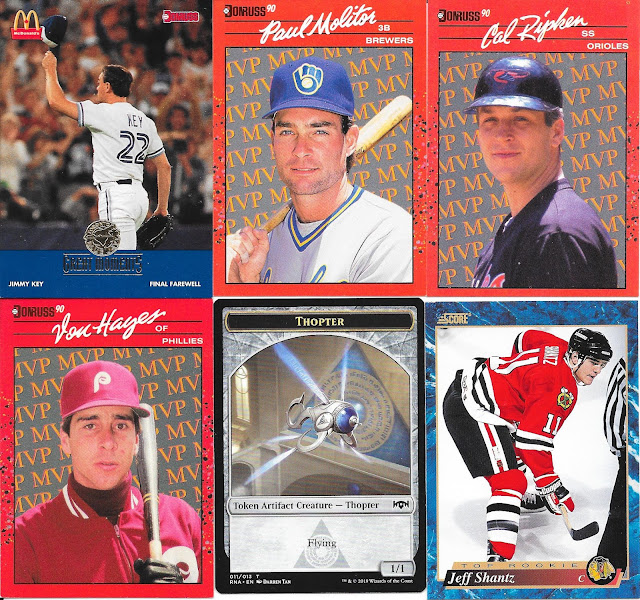 Definitely a bit of everything in this one. The Jimmy Key card is the final card in the 1993 Donruss Blue Jays Greatest Moments Master Set. The set is only 36 cards, plus two error card printings - this being one (the Jimmy Key front on card 23 when it should be the World Series celebration). I believe this may be my first master set of anything...unless I am missing something.
I have the complete Donruss MVP insert set....then I find out about the stupid "inc" versus "inc." variation and feel the need to get both for some reason. These give me the "inc." variation, now I just have to finish the one without the little dot because....reasons.
Oh, and we throw in a Thopter artifact token for good measure. 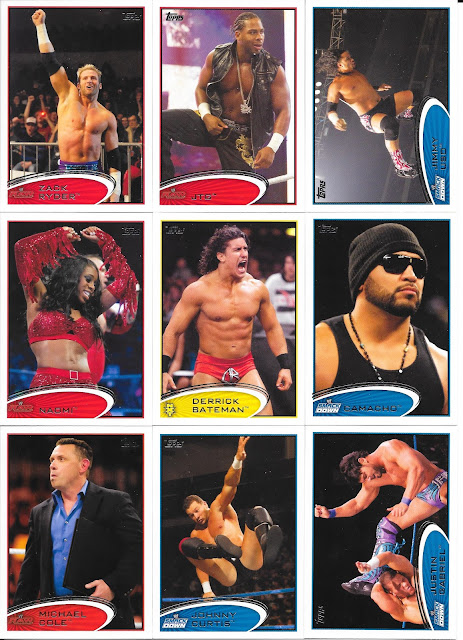 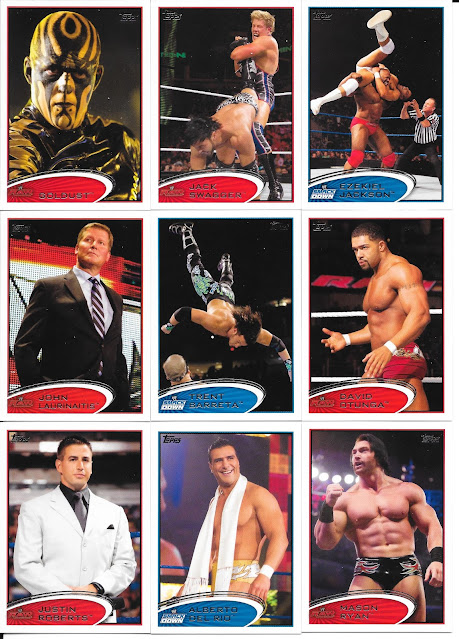 Why not throw in a good bunch of 2012 Topps WWE base cards to bring me over half way on the base set. Best card is AJ as per below... 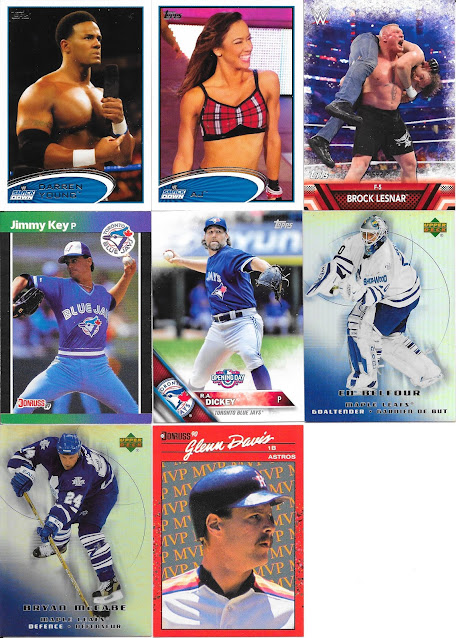 The Brock F-5 bring me to only 2 missing from the Finishers insert set, then a few Toronto cards for good measure and a Donruss MVP I thought I was missing (but wasn't - oops).
This one touched on pretty much everything I collect!
Posted by CrazieJoe at 8:00 AM