So, before getting heavily into the baseball and hockey cards in the bunch of cards Jeff gave to me, a couple interesting items which sat on top of what I got... 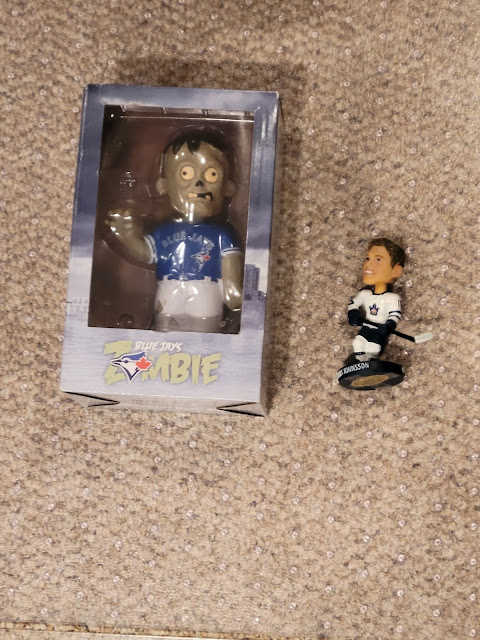 I don't go out of my way to collect bobbleheads. I think they are good and all, but they take up room and getting a collection going would just be too space intensive. That said, I do keep the ones that come my way, so these have a great new home now. I only with the Zombie Blue Jay was an actual player who was zombified, instead of being generic. Still, very cool and unique, it's from a few years ago, game day giveaway at the stadium, so very neat indeed.
As for the first few cards on top that were baseball, as I will go through the baseball stuffs first in the next few days...

Okay, so, Blue Jays auto for Jacob Anderson - very cool (and it's serial numbered). Guy never made it past rookie ball, but still - Jays auto card, very awesome! Same can be said of the Halladay card. Sure, it's just white, but I don't care, amazing card and love to have it.
Then we get to Leal. So someone must have taken it upon themselves to make some artistic 1 of 1 cards and this was the result. The backs are below which support this theory.

I have no idea who did this, or the reason, but....I am keeping it. I mean, underneath, it's still a Jays card, and even if you consider this to just be a ruined card, I'd still keep a dinged up Jays card too, so, here it stays.

These may all be keepers, but Jeff definitely sent some stuff that I can trade for him...though not tomorrows cards...more keepers there...but after that, some stuff you might want. Promise!