I like to think that this is the only part of my collection that I have and keep and grow for a monetary purpose, but I would expect if that were the case, I'd have the ability to sell it later....yeah....might take a while to get to that point.

Now, none of the packs have gone the way of the 2011 Topps Update baseball packs given the Mike Trout Rookie aspect, but there are a number of packs which have had a nice bump since I picked them up. I'll point out some that I recall as I go for example.

The other aspect that I like about the packs, once they went to it, is the artwork on the packaging which comes from some of the cards within the set itself - as you will see below. 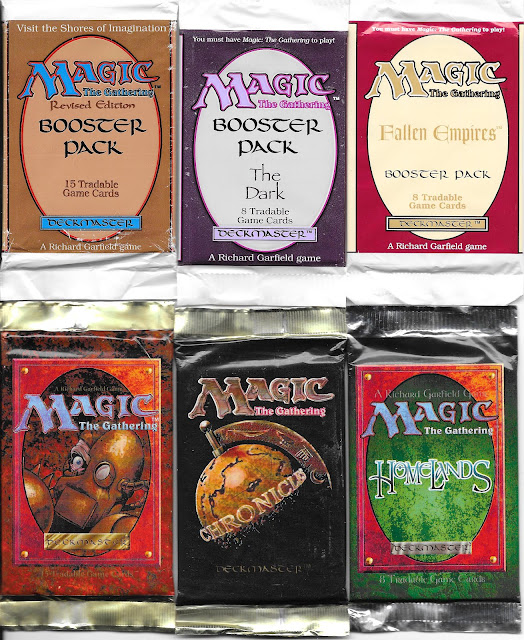 The sets earlier are ones like Alpha, Beta, Unlimited and Antiquities - all packs that go for thousands of dollars - a bit out of my price range until I will that lottery.

So, the first pack, Revised, is the most important to me as this was the set that I was introduced to Magic with, and had plenty of cards from when I first started playing. I picked the pack up from 401games just a few years ago (or maybe it was a Santa gift ;)) for say $80, but now goes for north of $250 (all prices Canadian).

You'll notice, back in those sets, the pack design was quite basic, and the wrappers were white. Once it was realized people were using a bright light and pushing cards to the top, that people could pack search, so the packaging was changed accordingly as you can see on the bottom row. The design itself was also changed slightly at times then, to remove the oval "window" or mirror frame look. 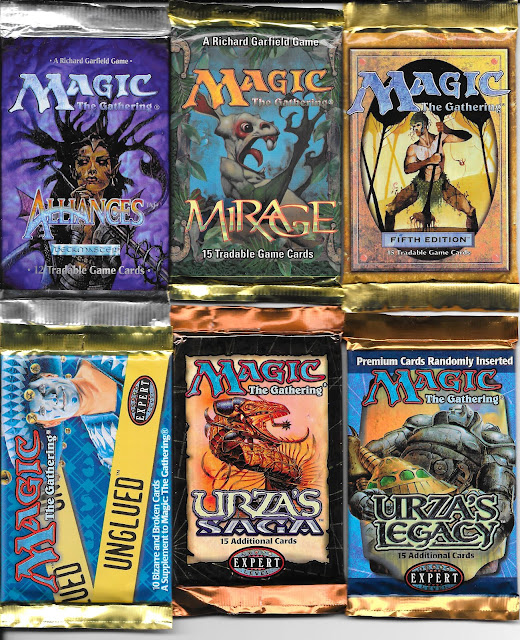 Like the Brass Man on 4th Edition above, the packs started to feature artwork from cards within the set. The card packs then also started coming in multiple different artworks on the pack (now we are usually up to 4-5 different artworks in a given release/set).

I believe Unglued was the first set which had the artwork design change directions. Reason for this is the Unglued was the first "joke" set. The cards in these joke sets (there have now been 3 - as you will see the others shortly), have grey borders instead of the white/black that were used at the time. The cards were either just for fun with effects that were silly - for example Chaos Confetti, in which to use the ability, you have to rip the card up into pieces, toss the pieces onto the playing area, and any cards they land on are destroyed.

Due to the extremely strong cards in the set, Urxa's Saga is another set/pack that has gone up well in value. I picked one up for $40, again, a few years ago, and they now go for over $120 each.

I wish I could do this well on my retirement fund investing. Heck, even the Urza's Legacy pack which I picked up for about $25 goes for over $60. 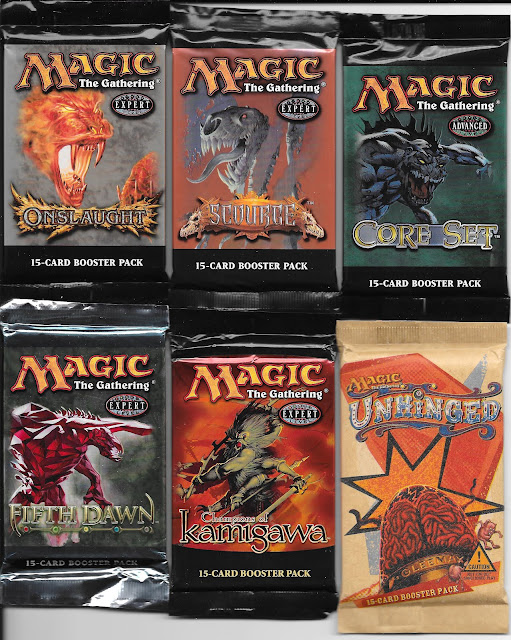 Moving ahead, into about 2000 or so, the pack design changed again to these black border designs. Unhinged - which is different in design, is the second "joke" set, which is why the different design. It was actually done in a paper wrapper which was different. 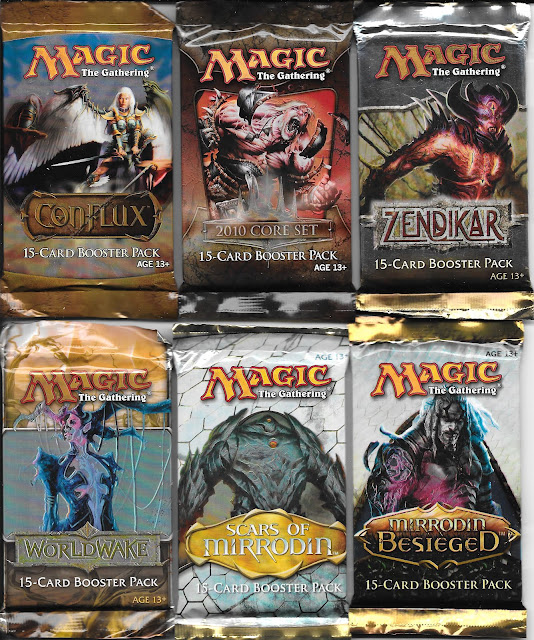 As time moved on, the design continued to morph, with more design put around the set name. These packs now are roughly $20-$30 each. Just for comparison, they would have been about $4 each when they came out. 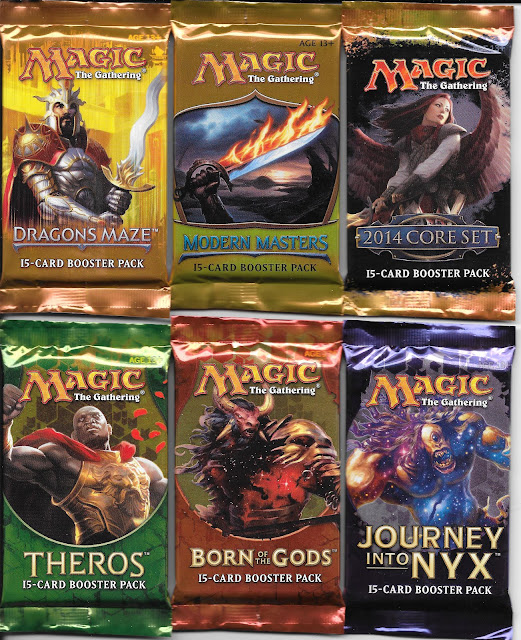 About 6-7 years ago, the design changed to what it is now - with the colour background of the pack taking up the entirety of the background, edge to edge, and the set name being done in generally the same font. The artwork here seems to be coming out an opening, but that is about the only change to current packs, where they are just there (no opening). The normal packs here haven't really gone up in value - the only one here really having changed is the Modern Masters which is a premium set and originally were about $15 when I picked this up, and now goes for about $40. 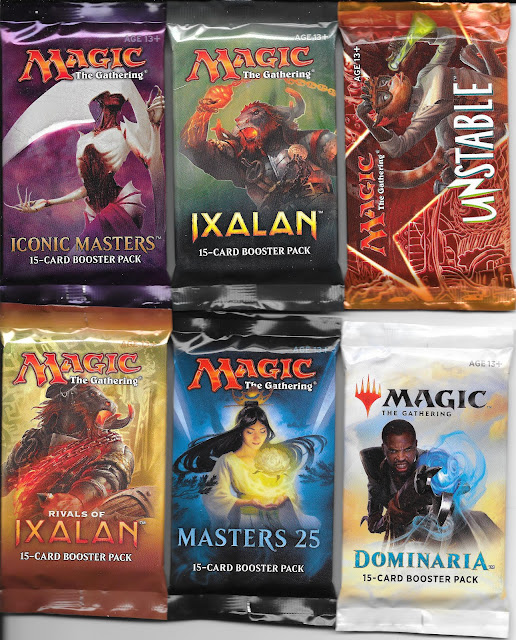 Here we have the more recent releases, and as you can see the artwork just sits on the background itself, or may be faded into it like the Dominaria design.

That's a glimpse of the Magic packs I have, just under half of them or so. As I say, the closest thing in my collection to actually trying to get more value than I have put in - but that will probably never matter - at least as long as I am here.
Posted by CrazieJoe at 8:00 AM