So yesterday marked the end of Kawhi's time with the Toronto Raptors. His one year began nervously as people were not sure he would even show up after the trade. Not only did he show up, he did so in the best possible way - bringing the first NBA Championship to Toronto, and to anywhere outside the US for that matter.

Obviously it is disappointing, and my best guess is that the Raptors will still get into the playoffs this year, but more likely to be knocked out in the first or second round at best.

Then it will probably get very difficult. Barring a big trade, or great player growth, could see a lot of people leave after the coming season. The pessimist in me says, after this year it will be to a mini rebuild, but hopefully it doesn't quite reach that level.

Can't fault Kawhi, I think he wanted to be home, but on a solid team, so once the pieces fell in place, it was a no brainer for him. Toronto did everything they could to show him the best they had to offer, but the man wanted to be home.

I hate the idea of buying a championship, and I don't think the Kawhi case quite meets that criteria as I think the plan was a long term one, and though a championship was a dream going into this year, all the pieces just fell into place. Too bad it ends up likely being a won and done....Lowry and company, please feel free to prove me wrong.

Beginning and endings - happens in all sports - and all sports entertainment...

Evolution was a great stable and made Batista and Randy Orton. I think both would have probably made it eventually, but may not have been quite as big as having Triple H and Ric Flair by their side as they got there.

Edge's retirement due to injury was sad obviously, and easily memorable as well. He has done well for himself outside the ring, and it has been nice seeing him back doing stuff with WWE like the WWE Network shows that totally reek of awesomeness. 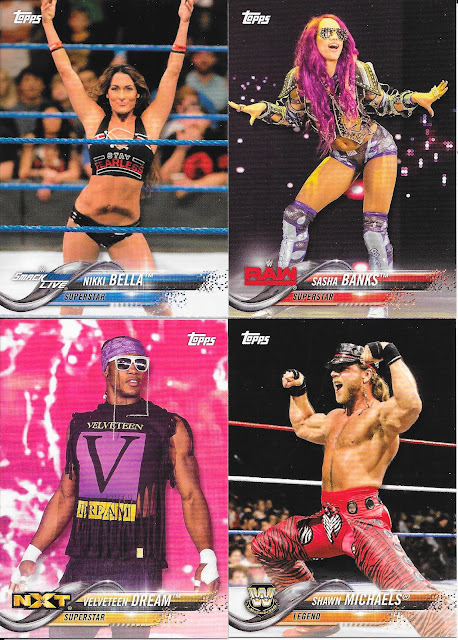 Some awesome base cards. A conveniently placed HBK...like he knew I was talking about him, Sasha, and one of my personal faves for the last couple years, Velveteen Dream - so good so young. I will even go as far to say, as much as I am not a fan of the Bellas, this is a card of Nikki - that is all the praise I can give. 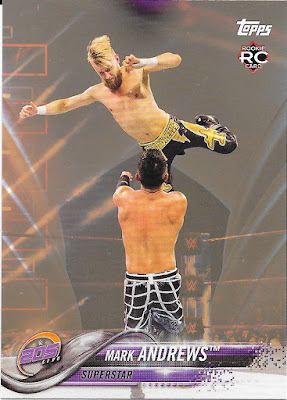 Though these fall every two packs, the first bronze parallel out of the blaster. Not one I care much for as I keep tabs on 205, but don't watch religiously, but happy to get any of them.