Something different and early

At Christmas - yes a good half year ago - I got a random "almost" box of cards from my mom which she found being given away and figured I would get a kick out of. Instead of 36 packs in the box, there are only 34, so I can only assume there are two packs in the box which would have "hits", and that those have been removed.

The good news is that, the base set is only 100 cards, so ideally I will be able to get a complete set to put away and keep, and some dupes for trade to anyone interested.

The box itself is a little banged up, but I will probably use it to store the base set I,, hopefully, can completed.

More hints....it isn't a major sport and it isn't a Magic set, so nothing I have ever  collected, opened, or had before.

More hints...I am a bit early for the September 8th anniversary of when the topic it relates to, first hit TV airwaves... 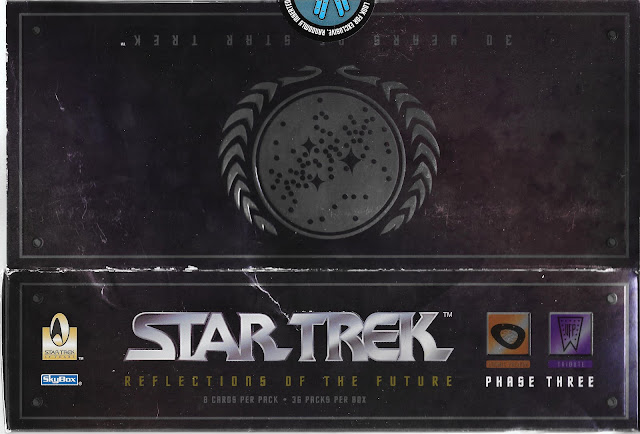 As I said, the box is a bit beat up, but still good enough for storage purposes.

I watched some of the original Star Trek episodes around the age of 7-8 in the late 80s on re-runs, but Star Trek TNG is what really got me into the series, and the world of Star Trek.

Star Trek wins out with me, well above Star Wars (I didn't watch any of the Star Wars movies until all 6 were released - well, what was supposed to be all six until well....you know...).

This should be good for bringing back some fun memories - though I have avoided looking at the checklist, more fun that way. I also figure there won't be any real "hits", but have no idea, and don't know what they would be either. Given this is a non-major league sport box, let's do scoring similar to wrestling...

Also, figure I will attack this three packs at a time - not sure I want this box going on for too long, but this post has gone long enough, so just one today (and that evens out the rest of the packs as well....just coincidence, I swear). 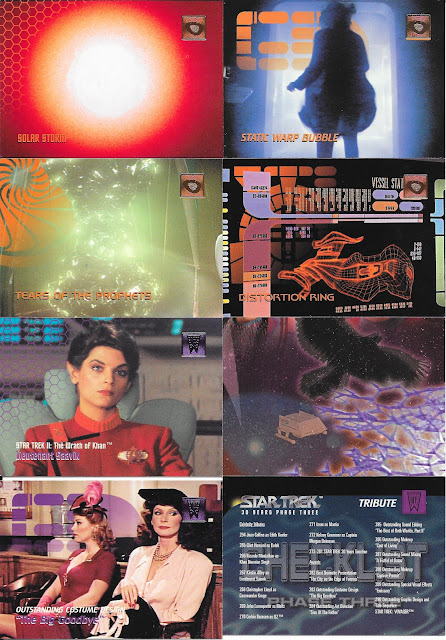 Okay - this is a very interesting commemorative set. I mean, cards like the Solar Storm don't give you much, but then you have nice cast cards like Kirstie Alley in Wrath of KHAN! and Dr. Beverly Crusher (played by Gates McFadden) in period costume from a scene on the holodeck. 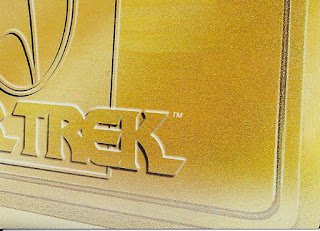 Although the pack says 8 cards, there was this put in as well - a puzzle piece of sorts.