Over on TCDB during this year, there have been a few changes to some sets and how they are listed due to small variation difference. I entered these sets back when these variations weren't listed and have been waiting to try and get through a few of them at the same time.

Well, that time is now.

My purpose for going through the cards today is to separate into the two sets as they are, for variation purposes, different.

Depending on how the numbers fall out, I may or may not care to go after completing one variation set over the other.

One problem I thought I couldn't fix - I have the last two hundred cards in a sealed box and had no idea of which set it is, but luckily it seems the last 200 cards were only printed with the hologram so luckily, crisis averted.

Just going through my Leafs dupes - there were only a couple with the hologram. The problem is, that's the base set I have everything listed under, so took some time to transfer everything else to the right set.

Actually not a huge project for this set as I have maybe half the set and most of it is with the text hologram, still, about an hour of my life in separating it out. 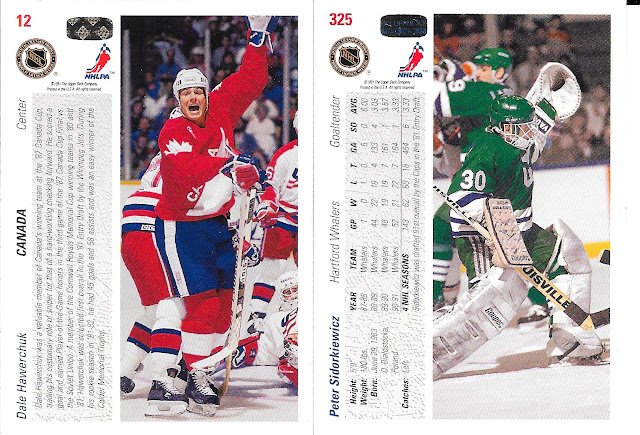 Just reflective enough, you can see the difference in the holograms.

Oh Donruss, how sneaky you were...small differences between the factory sets and wax pack cards that (I think) started here, but don't quote me on it. I don't really go out looking for the differences, but when they come up, I note them to deal with them (like here).

Apparently 1987 Donruss difference was simply the orientation of the back of the card. Definitely won't matter to me for completion of the set, but I would make note of which ones are factory set cards versus not.

The Upper Deck hockey above seemed more to be about timing and that Upper Deck changed how they did the holograms mid-year whereas the Donruss baseball issue is just how they printed one set versus the other.

I apparently have about 125 cards of the set (not including Jays dupes I keep). Out of all those I have...1 factory card. Would expect there to be not many as I assume most people don't split up factory sets.

So if you flip the card over (left to right, not up and down), the two backs are simply: 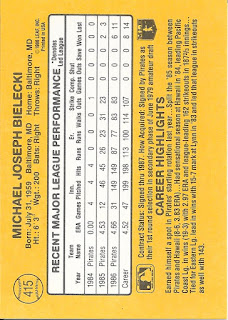 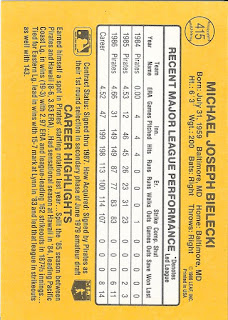 At least it was easy to mark that one set off now...oh wait....Jays....ah, one there as well. For the team cards, I will definitely treat the two separately, so at least I have a factory set Ernie WHitt that I didn't realize I had.

This is a tricky one. There is a border design difference with the factory set. Do I care? I don't think so. I care to keep the cards tracked properly, but am I going to care how I complete this one for my personal set - I don't think so. For the team collecting, yes, so I delved through the 1988 Donruss I have to see what factory set cards I have, if any, to pull out and list separately.

As it turns out - only 4 factory set cards, all ones that are the only I own, so I can't really show the difference, and as I say - not feeling I need to replace them in the set.

Again, this is one I don't care about as far as the base set is concerned. Heck, I am not even going to go through the base set or the dupes I have to note what they are. That said - for my Jays collection, absolutely necessary!

Pretty clear the small difference, once you know what you are looking for.

The red border. So, the factory set has a different pain splatter red border, than the wax pack cards. Yeah - another case of, small difference which won't impact my care for collecting the set, but will need to document with my Jays cards. Here are a couple examples of the different borders. 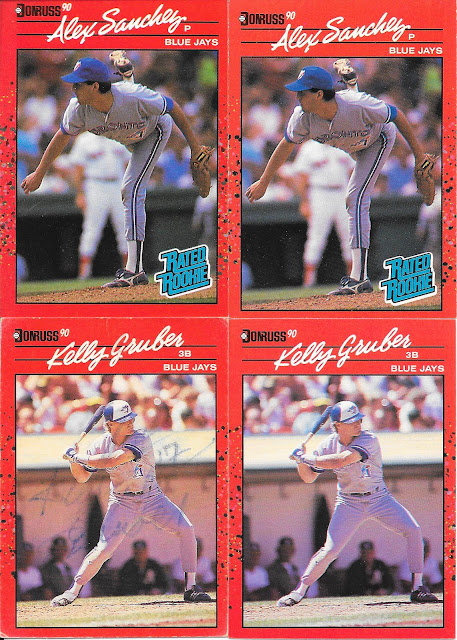 I have a couple of each versions - and side by side, the difference can be spotted, but man, talk about a small difference.

I am not even going to go through my set that is boxed and away for this one.

The easy of this set is that, I have a sealed factory set, so I just need to migrate that to the appropriate variation at TCDB. I will worry about the variations only for the Jays, but it does make me wonder - for my error and variation binders, I probably need to make a guideline along the lines of not collecting minor printing variations like the dot behind INC on the back, or the retail versus hobby variations.

An example of the border difference? Here are a couple cards showing the big difference of a dot. 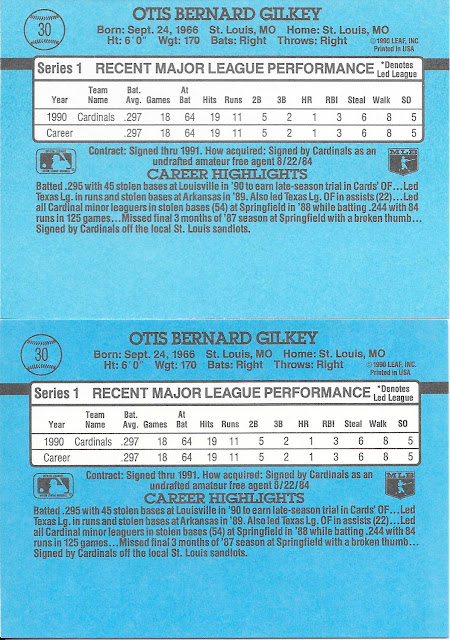 Wow - well, there's a full post dedicated to OCD!
Posted by CrazieJoe at 8:00 AM