The niceness of a time out of busy season, and a bit more normal year than last in some respects at least. Today feels different - even in the cards.

Still a good number of keepers from the pulls today. 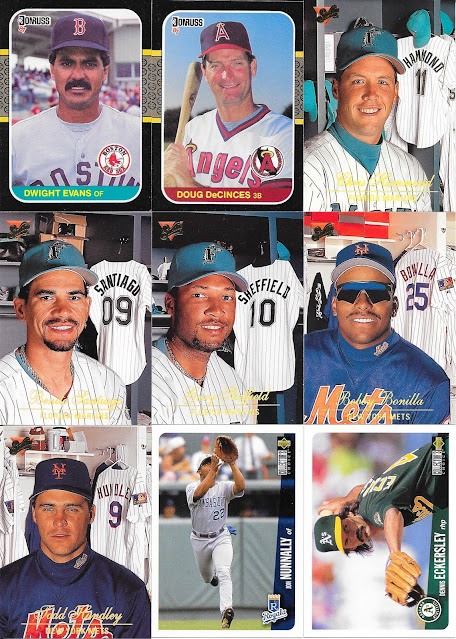 1987 Donruss is a slow build set whereas Studio circa 1994 is just a set I really like the look of, so happy to really just start collecting it as I only have a handful of cards still at this point, but more would be nice. 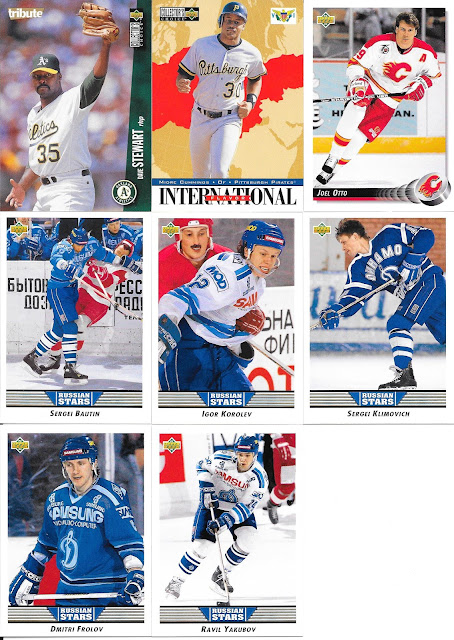 Ah yes, the way to make larger sets for hockey which was a thing in the "junk wax" years. In 1992-93 Upper Deck, one of the ways we made sure to beef up the base set was through subsets such as these cards from the Russian Stars subset. Sure, some ended up with NHL time, but I am sure that wasn't really the point with these.
Going into the rest of the cards...there were a few Upper Deck basketball that scanned so badly, I\m not even going to share them here - I stuck them away before noticing...but wasn't anything new...unline these... 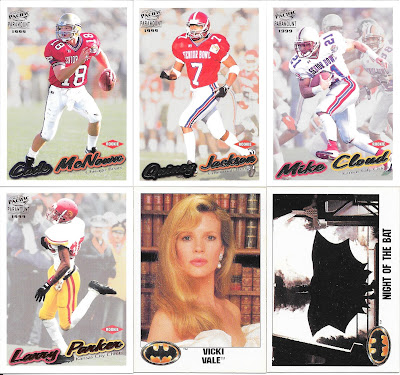 Never seen 1999 Pacific Paramount football cards before. Nor a bad design, though the names can be a bit harder to read. Still, I like the additional Batman cards a bit more myself. Though then we get these... 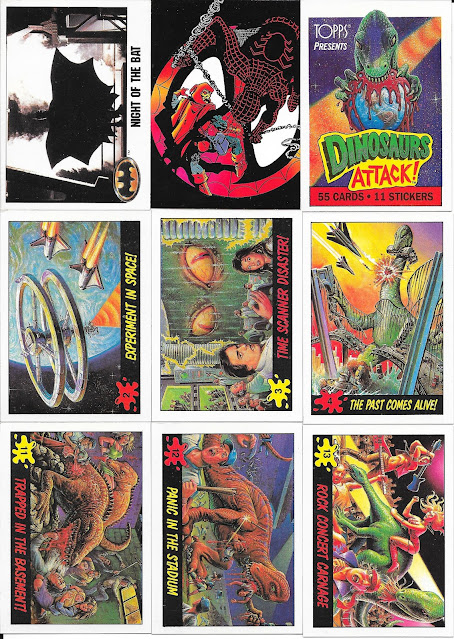 1988 Dinosaurs Attack 55 card set. Ummm...that was unexpected. Sure, they are colourful, pointless, and just show how everything had a card in the late 80s. Done very much in the monster movie style of the 60s and 70s. I am guessing I may just see the other 48 base cards in the lot...not sure who would have pulled them otherwise, and why someone would keep anything less than a set. 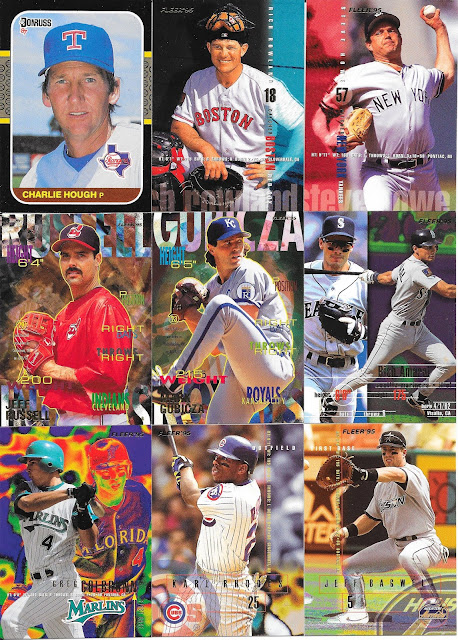 Do I need to say these cards come from the mid 90s? Just too much going on with the Fleer baseball cards. Yikes. 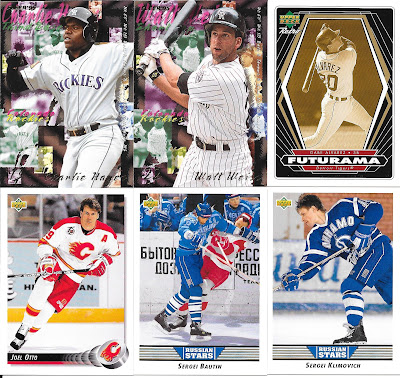 The Game Alvarez Futurama card is a minor league card, and a design I haven't seen before, but I can get into the retro design. Not a minor league card collector, so not keeping this one, but that "retro" design label actually reminds me of the Retro used on the McD cards also done by Upper Deck that year. Guess it saves to use things across sets like that. 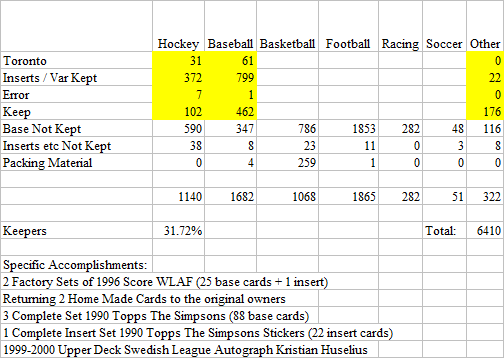 I end today with an apology. I received a couple packages in April, another from reader Ken and one from reader Jeff. Both much appreciated, but due to the hectic times of April, ignored the last couple weeks. I apologize as I hate "sitting" on packages, as I want to get them shared and appreciated, and give thanks as soon as possible, but that just wasn't possible the last couple weeks.
Today I get to change that by first sharing some cards sent from Jeff. As much as I want to wait until I can deliver a box, I'll probably at least throw a PWE or two your way in the interim. 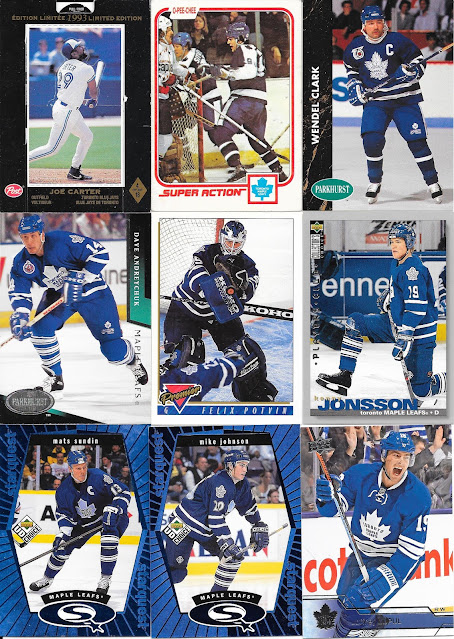 As is apt with cards from Jeff, we get a nice sprinkling of Toronto related baseball and hockey cards. The Joe Carter is nicely worn, which doesn't make me feel bad then sliding it to "pop-up" as it should be enjoyed.
I also really like the StarQuest design, and have since getting my first ones of Leafs, which was mike johnson, and here we have another such copy. My only complaint is the lack of capitalization on the names. 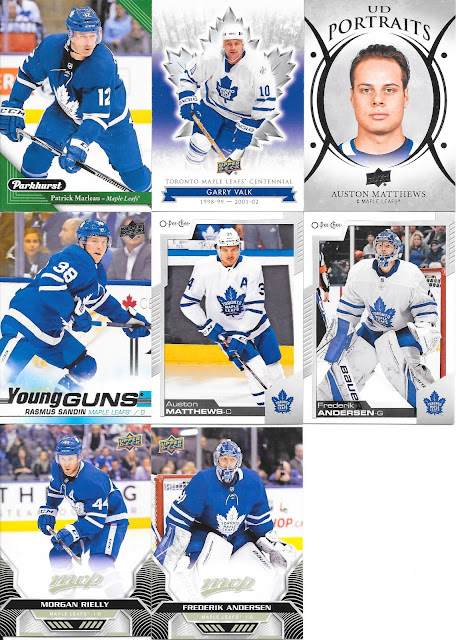 Here we have a bunch of newer cards I don't have. I don't have many Young Guns as everything, even the low end ones, seem to be scarce these days. When you get into anything from the last couple years, all I have is from trades basically as I don't buy much "new" product.
Fave of these is the Auston Portraits card - they do these simply, and nicely. 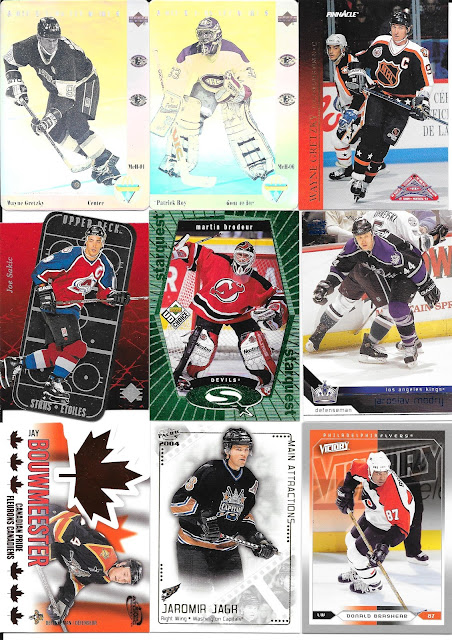 As tends to be, we also get some neat and unusual inserts/parallels from Jeff. I know about the early 90s hologram cards, but Wayne and Roy are new ones on me. The blue Pacific is a nice SN out of 45 while Brashear is out of 250. The Bouwmeester I recognized given the cut out design, as being from the McDonalds set, and an insert to it at that. 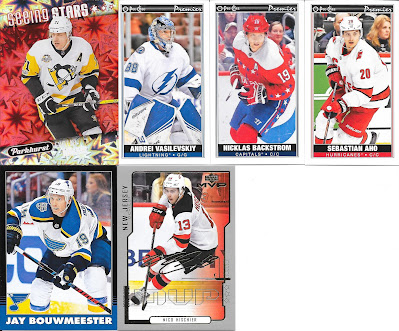 With some newer inserts as well, and you can see how well the 2017-18 Parkhurst Seeing Stars insert scans, very snazzy in the red goodness and shining star design. I also don't mind the MVP throwback design, though I never thought of MVP being a set we would be throwing back to 20 years prior.
Jeff also sent some other cards which, as I am not keeping, I will look to trade off for Bruins for him, so let me know if any of these interest you... 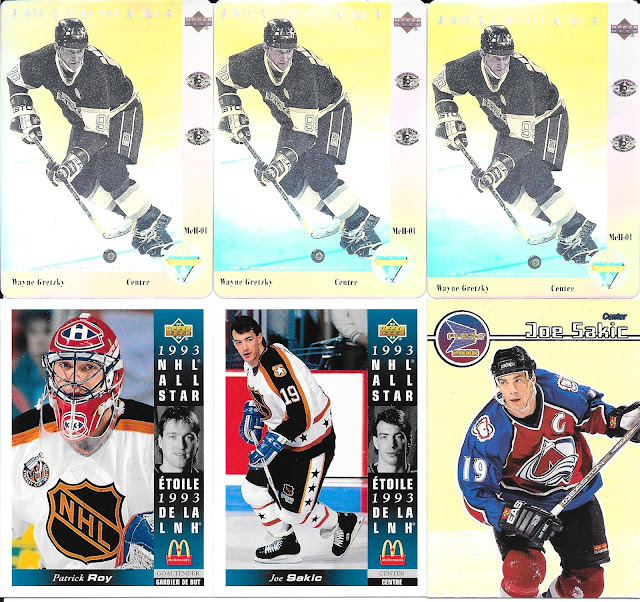 Thanks again Jeff, a great way for me to turn the corner on the busy season now past.
Posted by CrazieJoe at 8:00 AM