This is my third big lot purchase over the last few years. I think I picked it up in late 2021, but didn't start going through it until May 2022. It was $100 for about 20k cards. The usual offering by description of a bit of everything sport wise and probably some non-sport stuff as well.
No grand pictures this time as it wasn't as exciting to look at - just monster boxes, a handful, which honestly, themselves were worth getting even if they are a little beat up.
As with the other lot purchases, I'll track as I go and put a summary here as well when done!

It took a few years, but after the Santa Lot, and the fun I had going through and sharing it on here, I had been keeping an eye out for a second lot to do the same thing with again. Then, finally, in September 2020 came that opportunity.

For $60, I picked up a lot of roughly 20,000 cards which were advertised as being all four major sports - baseball, basketball, football and hockey (the 20k number is my estimate this time). So, very similar to the Santa Lot. The only question I asked the seller was whether it was mostly "junk years", which was just so I knew what I was getting - but surprisingly he said mostly 1993-2000, which would make it quite different from the Santa Lot, and be for a period that would really be interesting as there was a lot of crazy stuff in the later 90s (and before we got down to monopolies in sport cards (Topps for baseball, Upper Deck for hockey, etc).

So, the transaction was completed in mid-September 2020 - and here is a picture of the cards, after I cleaned them up a bit (so that nothing was getting damaged while I was waiting to go through them)... 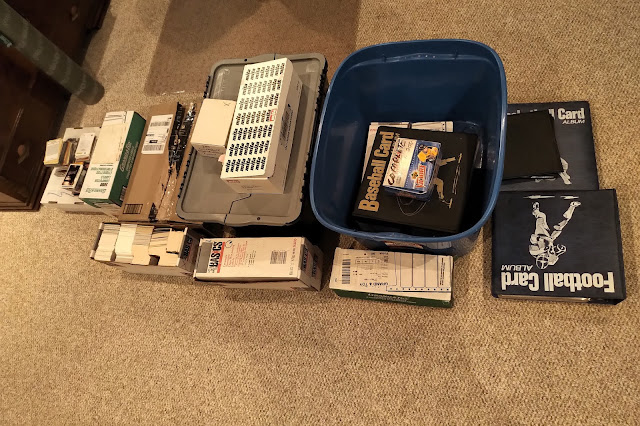 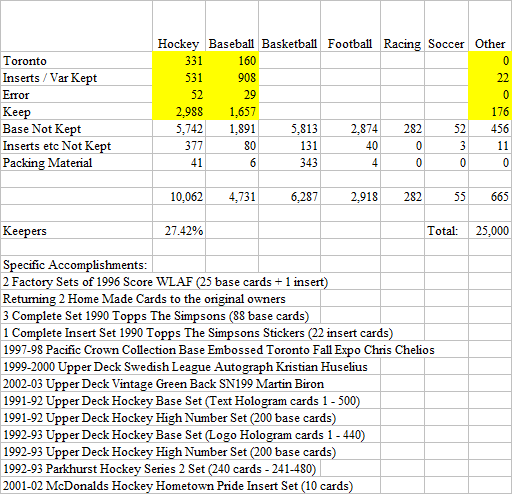 This was a gift from Santa in 2015 - approximately 15,000 varied cards (mostly hockey). So, being a numbers person, I have to keep track of exactly what comes out of the supposed 15,000 card lot. The way I am breaking it down is by sport or non-sport set, by collection if it fits one, if not, whether it is a keeper because I don't have it, and do collect the sport. I will update the contents as I move forward in exploring the contents so that at the end, I can see exactly how it has gone.
I will have plenty of trade material from it as I go, so just send me a message here or through tradingcarddb.com if you are interested in anything.
Should be interesting to go through - at least it will be for me, and hopefully for readers as well.
---

The Santa Lot project was completed on August 14, 2018 - my final post summarizing it. The totals are also below for what it is worth.

Update - September 10, 2020
Though I didn't keep track of exactly what happened with every card of The Santa Lot that I got, many were traded away to add cards to my collection I actually needed, but I do know specifically, I have sold off a few cards. Between those cards from it I sold, there was the Stephen Curry Topps Rookie back when I pulled it, and more recently, the 2003-04 SP Authentic pure base set, 2007-08 Topps Basketball base set, and one each of the Kevin Durant Rookie and Variation Rookie cards.
Between these sales, I recouped $200 which means, not only did I end up ahead financially, I got to keep all the rest of the cards for free. It isn't like finding thousands of dollars worth of cards, but is the best hobby related transaction I've had.