I hope everyone had a good Father's Day yesterday. It was a good day with the family, and the kids were happy out for lunch and with a movie at home in the afternoon. Cute gifts from the kids as they did some neat art things, and the movie at home as well as snacks was a nice present. Nothing card related, but a great time.

As for today - our work is actually closing from 10am to 1:30pm so that everyone can go out to the Raptors Championship Parade. It'll be interesting. Apparently they are planning for crowds as large as 1.5 - 2 million people along the entirety of the parade route. Not sure how close we will get to anything, heck, not sure if I will be able to get home with the large exodus of people afterwards, but it'll be an experience nonetheless.

I'll let you know tomorrow how it all goes.

Back to the regularly shceduled wrestling cards for today... 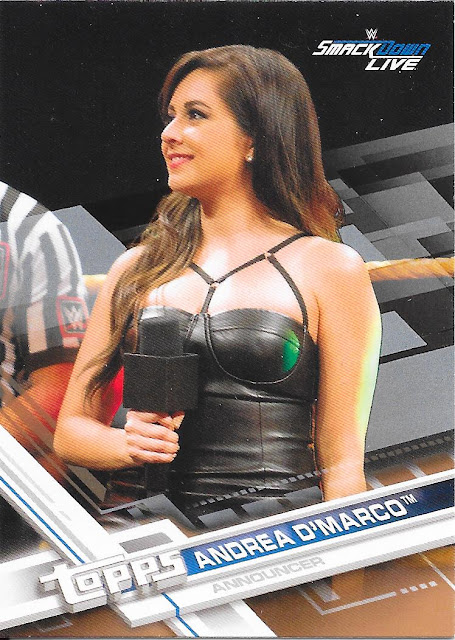 Andrea was in WWE as an announcer, and not overly long - about 2 years I believe. She did some backstage segments and the like, mostly on NXT over her time with the company. Not surprisingly, she was a former cheerleader, and appeared greatful for her WWE time on her release in 2017.

She has the distinction of being the only new card for me in this pack - I know, she's honoured. 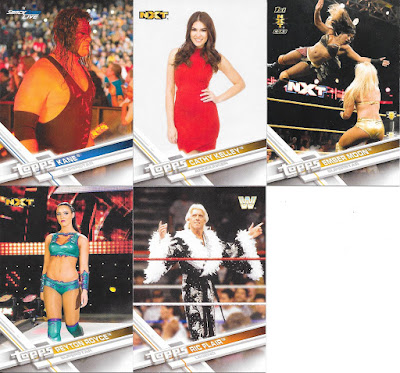 As vlank as it looks, the Cathy Kelley card does stand out among the crowd. Her, even a better use of red than the Big Red Machine. 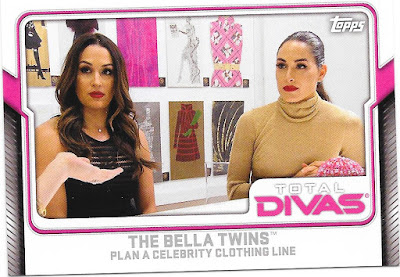 Yeah - this didn't even deserve a more straight scan...lol.