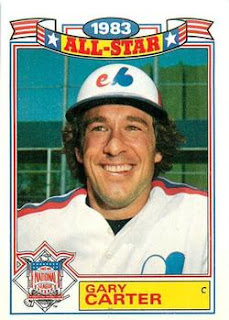 Gary Carter was a great signing for Montreal. Now, with hockey, I couldn't possibly speak well of anyone for time spent playing in that city, but baseball is different. Probably because there was no chance back growing up, that Toronto and Montreal would even face off against each other in the playoffs where baseball was concerned, so it was okay to root for that other Canadian team.

So I can speak positively for Gary and his time with the Expos. He was the best catcher in Montreal history, and would have to be in the conversation for best Expo ever - though I'd say maybe number 2 behind Andre Dawson.

In his 12 year run with Montreal, he was a fixture behind the plate. He was an 11 time All Star, including 7 being with Montreal, and his WAR ratings? In Montreal his offence was 42 wins above and his defense was 21 wins above.

No surprise he made it into the Hall of Fame in 2003 - maybe a little surprising it took him 6 years to get there, but that may be my Canadian bias speaking.

Good to recognize a great player, who especially had a great time playing for a Canadian team, and shows up in a great little set with the 1984 Topps Glossy All-Stars.

Speaking of April - glad Gary has a smile on his face...now I just need to make it through one more month of busy season - I swear each year seems busier than the last!