I'll get to the title later - first, this is a nice bunch of everything. We get a few Leaf cards that are all new additions for me. 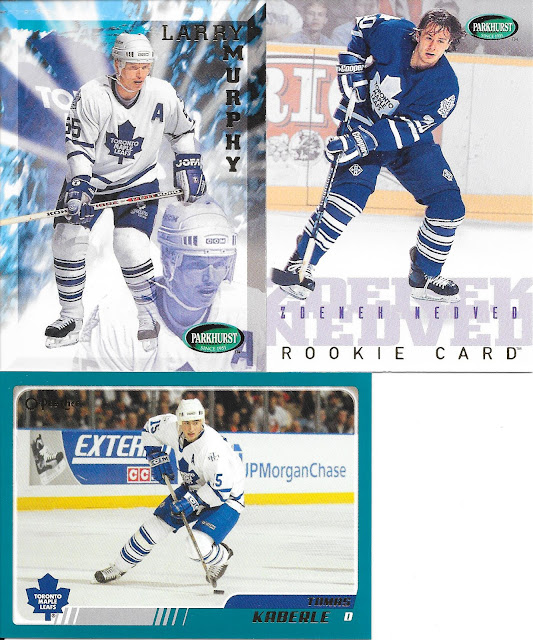 Not a fan of the Parkhurst mid-90s International set, and wasn't really a fan of Larry Murphy, but both new additions for me.
I may not be a fan of the teal border on the 2003-04 O Pee Chee card, but like adding it to my set - I don't have enough early 00s O Pee Chee. The sets are not my favourite for look, but still gotta catch 'em all! 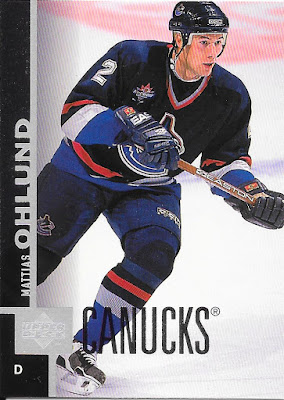 We get an ever so slight, but just enough miscut. Enough on the back to see it's miscut, but on the front, Ohlund is slightly losing his head. 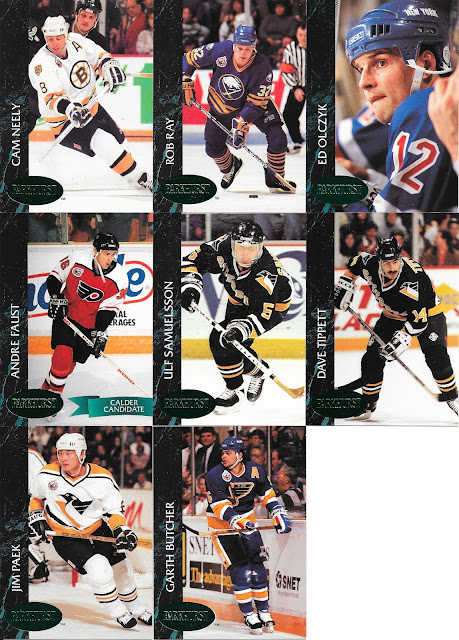 Inserts? got some of those too with the nice Parkhurt Emerald from 1992-93. Still probably too many going to be missing to take a run at that parallel set, but did get some dupes... 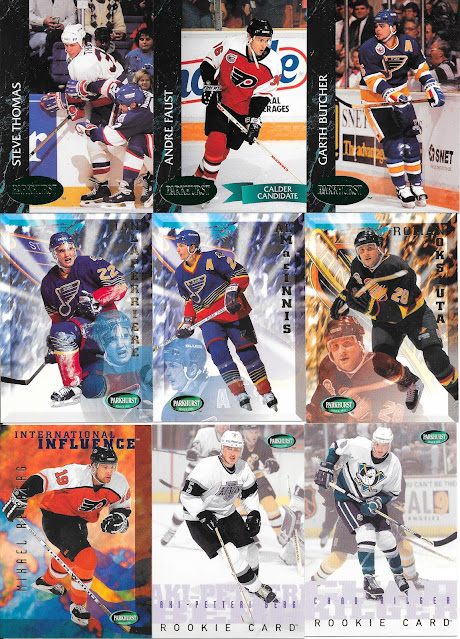 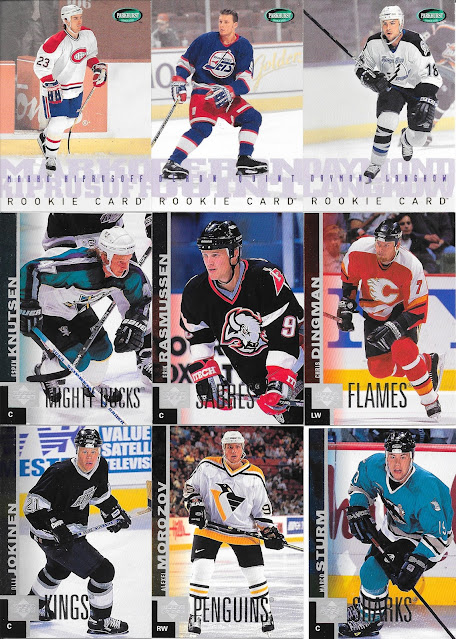 Currently positioning that neither of these sets will show up in big enough numbers to push for collecting the set, and they aren't sets that excite me either, so not going to go out of my way to start collecting them. 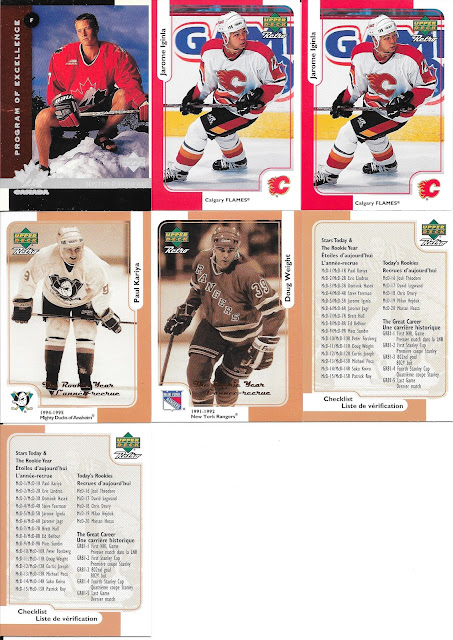 We have some McD cards which are always nice to get. I am missing one "regular" card from the 1999-2000 set, but have the retro 15 card insert set completed. Maybe I'll find that last card here somewhere...
Lastly... 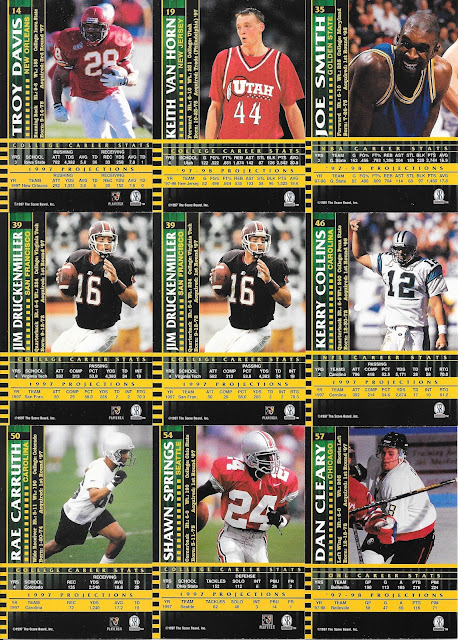 Figured I would show some of the backs of the 1997 Score Board Players Club set because, as you can see, they show some projections for the upcoming season.

What do you say we look at how that crystal ball turned out in a coupe cases...

Also, Joe was traded middle of that year to Philly.

Dan went between two minor league teams and some games in the NHL.

Well, not horrible on th projecting, but not good either. Never can tell how a year is going to go - just look at 2020 for a recent example! 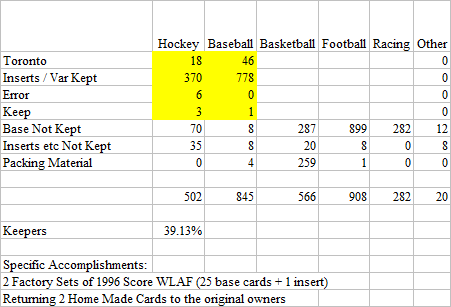 Let's end today with the last envelope (I think...) from reader Ken. Unlike the first two which were Topps Gold related, this one is all Canada...and mostly Jays... 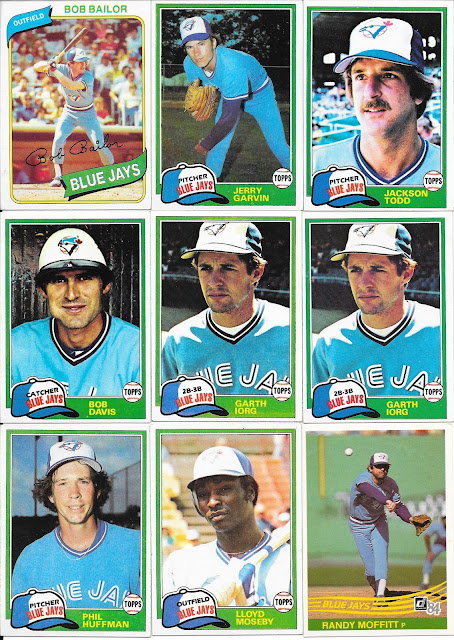 A bunch of fabulous early Blue Jays cards here to add. The 1984 Moffitt is a new one for my collection, and I love the floating ball coming towards the shot. Also like it because it's one of those cards that, the park background shot is so clear and easy to tell where the picture was taken. 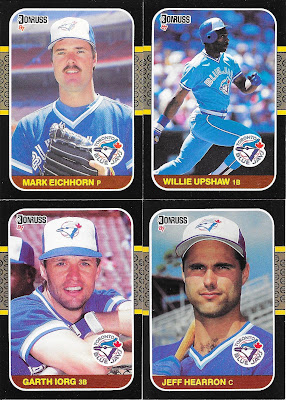 A quartet of Jays from 1987 Donruss - always happy to see Willie, and a couple more copies of Garth's smiling face too. 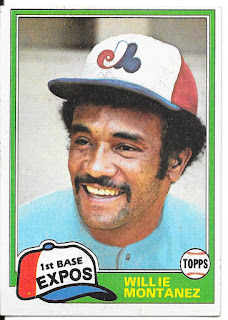 Speaking of Willie and smiles, we end with an Expo card which will probably just pit stop in my home and make his way out to Peterborough and a certain fellow blogger some time this year.
Actually, on that note, for those who I have done a few trades with, I do have some piles aside for people - nothing too fancy - but I am waiting for things to be a bit better - see possible vaccinated - before getting packages off. I'll probably end up doing a good send of 15-20 items in the summer to move some cards I have been meaning too, but just keeping health at number one right now...cards are nice too, but definitely doing the "required trips out only" thing still.
Everyone keep doing your part and here's to hoping the fall of 2021 is able to look a whole lot more normal than the last year or so.
Posted by CrazieJoe at 8:00 AM