A Card Too VAR

Another PWE trade for sharing today, this with another first time trade partner over on TCDB - Johnsogr - who brings up a VARiety of decisions. 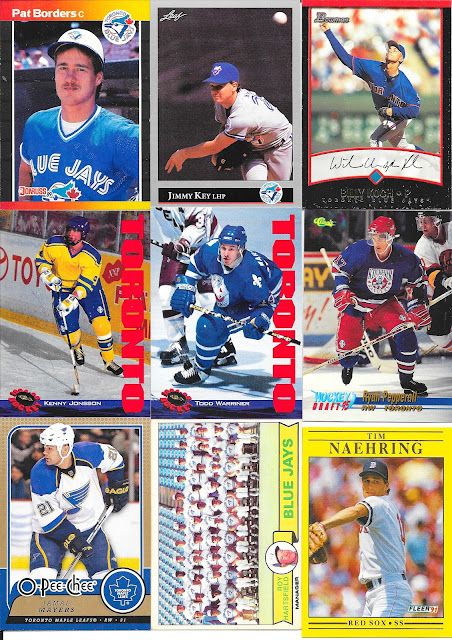 1989 Donruss, as most knows, has dot, no dot and double star "denotes" variations, so essentially the Toronto "team" set is about 100 cards including all the variations. I decided a while ago I'd go for those and I am almost there.
The minor league cards count as Leaf cards as they are all post drafted to Toronto cards.
The Jays team card at the bottom is like a variation as it is not from the Topps 1979 set so much as being from the Team Checklist which was a full sheet printing of all the team cards, printed on thinner paper, and many of which were cut down to cards like this so - there's a Jays single card "set" done!

Last up...1991 Fleer. I don't know what to do with this one. There is now the whole U.S.A. versus U.S.A variation, and jumbo cards in many cases are slightly different in formatting than retail. I have been collecting the "real" formatting variations, but not the period difference. I just don't know what I want to do with it and at some point will have to figure that one out...to VAR or not to VAR, that is a good question.