So, before getting this package from Shaw Racing, I had a lowly 6 of the 90 base cards from this set. Now, I am up to 75 - yup, a whole bunch of set help to show today! 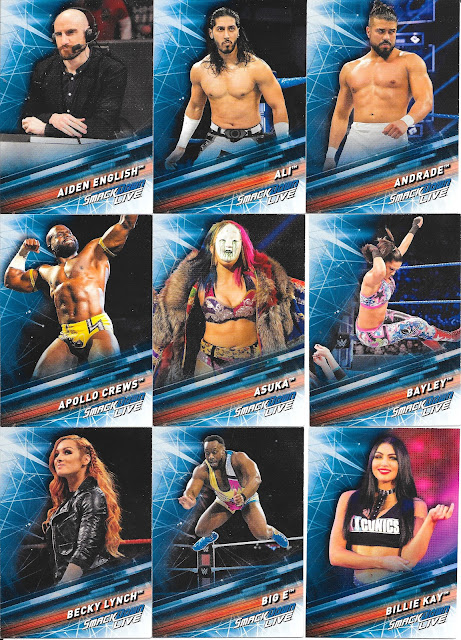 I guess alphabetical order is as good as any for doing the sets, which is done in many of the wrestling sets. Not all, but many.
As a result, you get people like Aiden English being top of the pile instead of someone like Cena, Rock, Triple H or Roman Reigns.
This set is from 2019, now 3 years later, a number of the players moved on. For the first nine here, Aiden, Andrade, Billie are all gone, and Big E is still dealing with his injury. 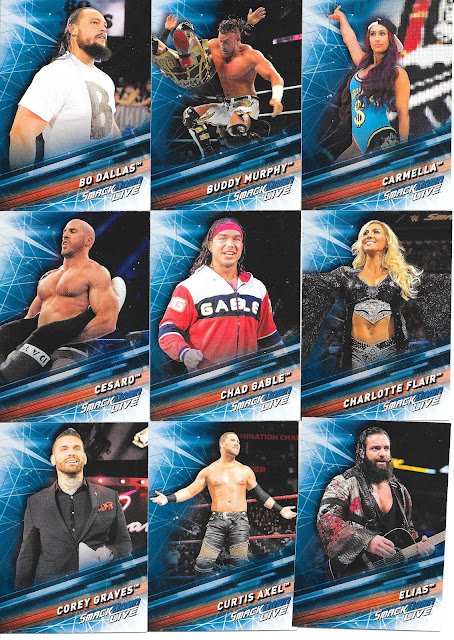 Even have some that have "gone" and returned, like Elias! 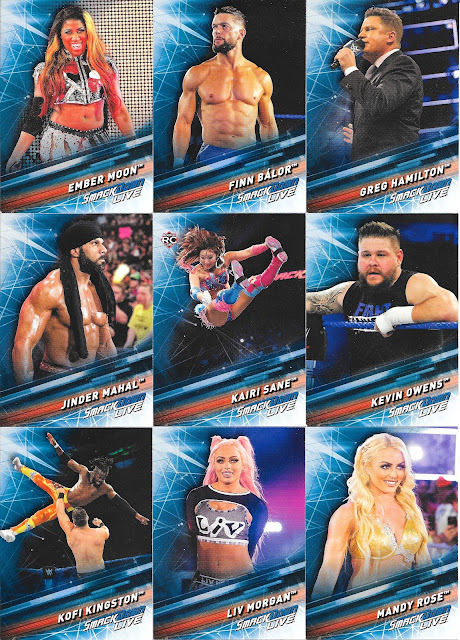 Given the cards are for Smackdown, the design of the cards is pretty solid design. As for subject content - I liked Liv back in this phase rather that the "Only Liv Once" 2022 Liv, but that's personal preference. On the other hand, Mandy and her time back in NXT this past year, is much better than she was back in 2019. 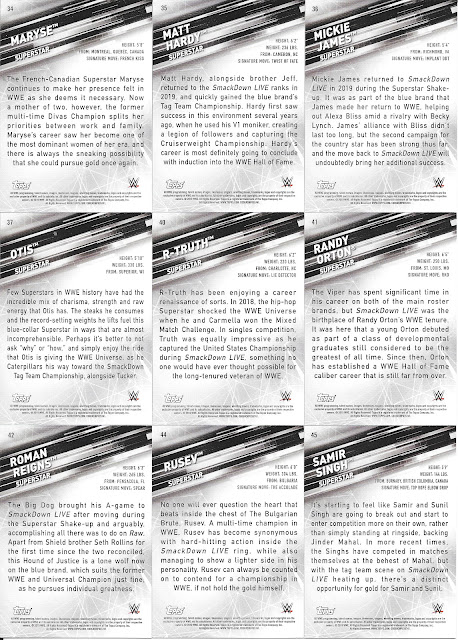 The backs are pretty basic, but what would be expected, so all good and acceptable there. 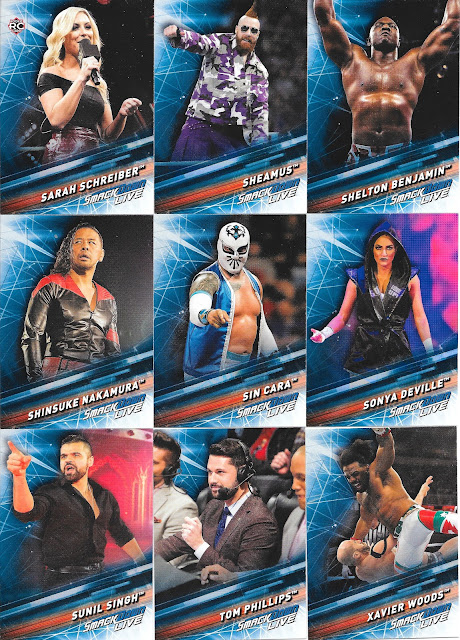 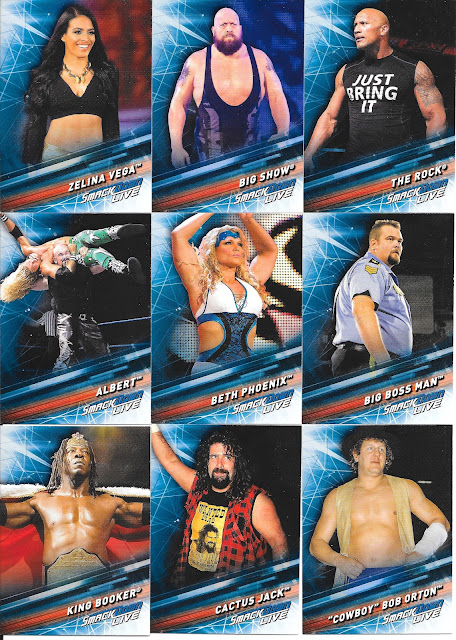 As alwayus, we get some classic legend types which aren't really "Smackdown" specific historical stars, but that's alright. Not sure I like Albert being one, but made up for by having King Bookah! 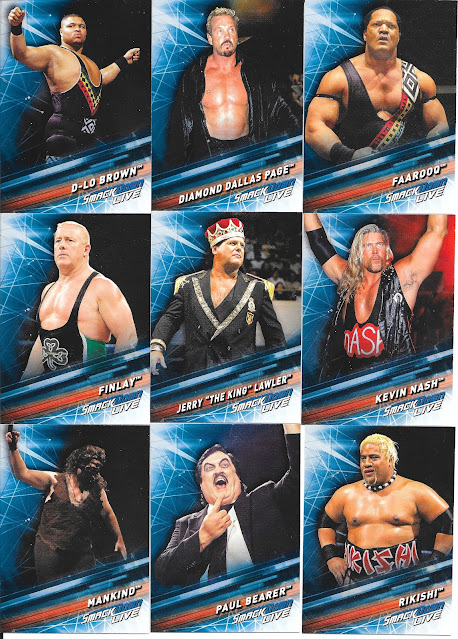 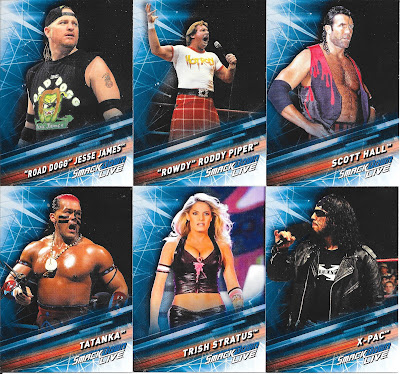 Last one in is the person who created "X-Pac Heat". It's always good to get a reaction from the crowd as a wrestler, whether it's cheers or boos. X-Pac heat represents the indifference, when the crowd just wants you to go away. Poor X-Pac....or Syxx....or 1-2-3 Kid, however you remember his wrestling days.

As I continue to dabble through sharing PWE trades from TCDB members as they come in, one today from member tullyelly. 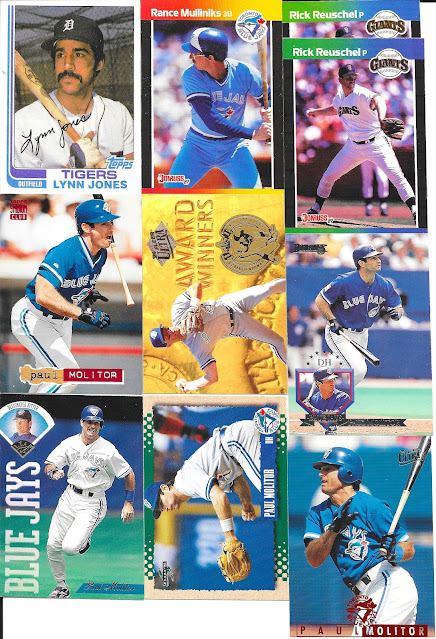 We get a single 1982 set addition and some error card additions - including the not expected Ultra Molitor in the bottom right corner, which is miscut on the back.
Winners of the trade are the last card in the 3 card Jays team "Award Winners" Ultra set in the middle, and  some of the one off Jays "team sets" such as... 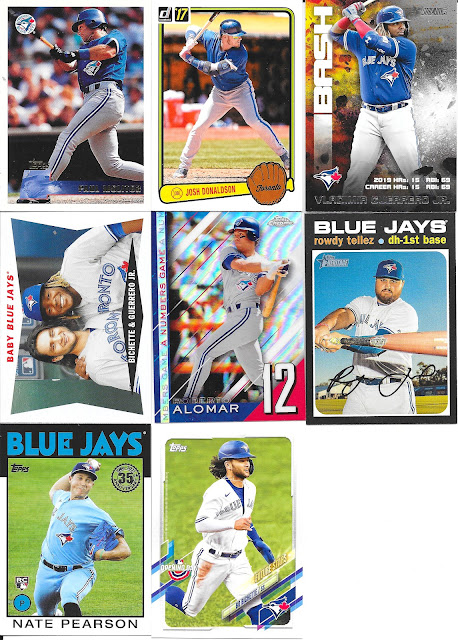 The Donaldson Donruss 2017 retro card, Baby Jays and Alomar Chrome card. That Alomar card scans quite nicely.
I also hate to say it, but the 2021 Topps flagship design is kind of growing on me.

One of these days I may just get a little more focused on exactly what I am looking to get in my trades, but I do like the variety!