Well, yesterday were the base cards from 2019 Topps WWE Smackdown Live's base set, and today we get a bunch from the inserts to that set. I presume Shaw Racing bought boxes of the cards to be able to have this much for trade, but I'm happy to receive. 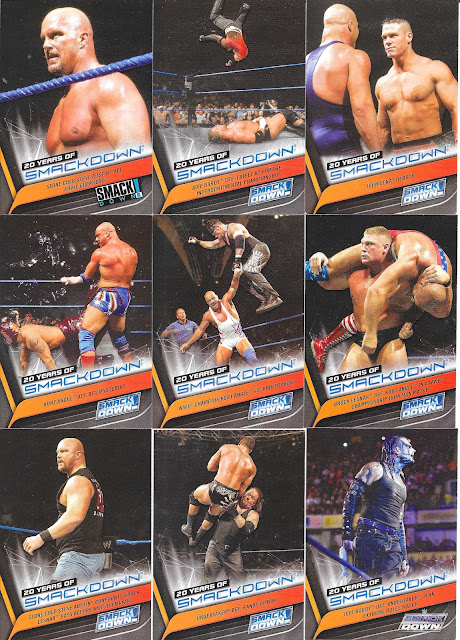 Completely makes sense to have a 20 Years of Smackdown insert set, and we get 24 of the 46 cards here. The earlier cards show just how important a cog in the wheel Kurt Angle was in the early 2000s. The days of the Smackdown Six (Kurt, Edge, Rey Mysterio, Eddie Guerrero, Chavo Geurrero, Chris Benoit) who were instrumental in driving the brand forward with great wrestling. 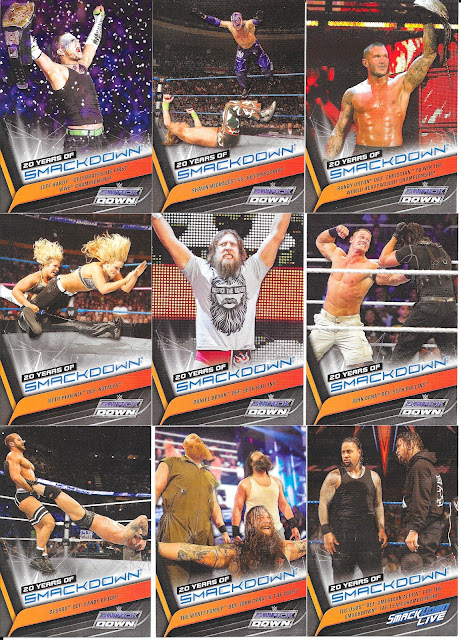 Sometimes I forget that Jeff Hardy actually was champion for a period of time - I always remember him more for being upper mid-card level and having a good feud with Undertaker - as far as his singles career goes. 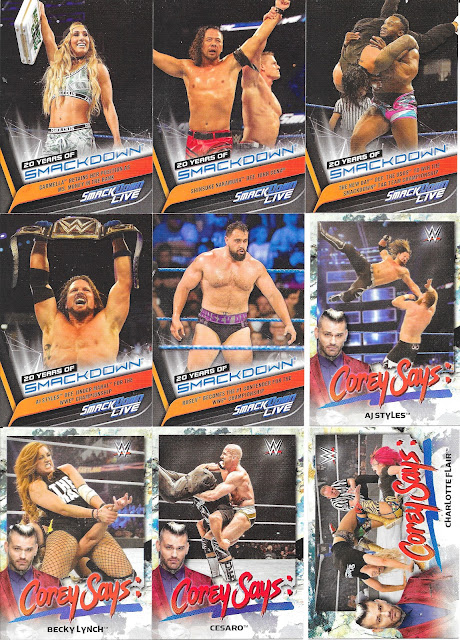 The other day, we saw Saxton from his pre-announcing days, and here we have Graves highlighted with an insert set - well, name plastered on an insert set.
I never cared much for Corey's in ring work, though I didn't see much of his NXT time before injury ended his career early. That said, I do really enjoy his work announcing, and he has done a fantastic job continuing to grow his skills on that front. Besides, a great Becky Lynch card gets bonus points for the insert set. 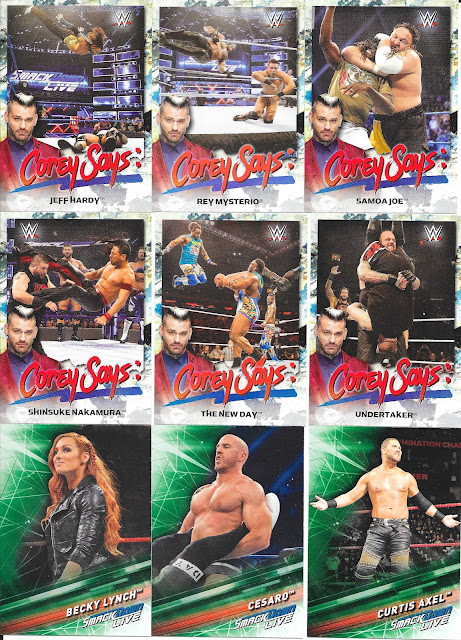 Speaking of Becky, the green parallel for the Irish Lass Kicker is pretty awesome. 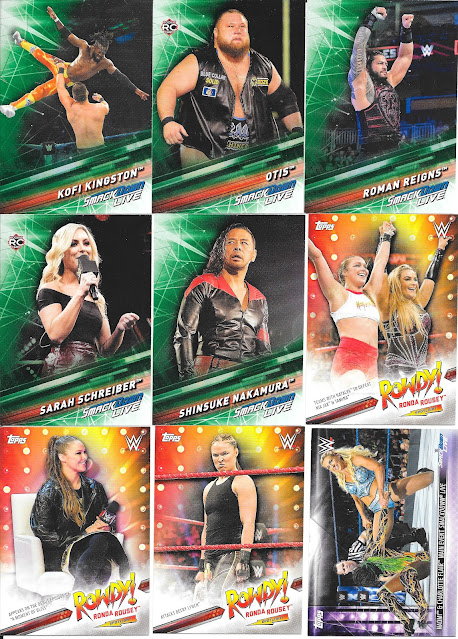 Ronda being all the rage, she had an insert set in 2019 which spanned a few sets, so we have 3 of the 10 inserts for this set, come across in the trade. 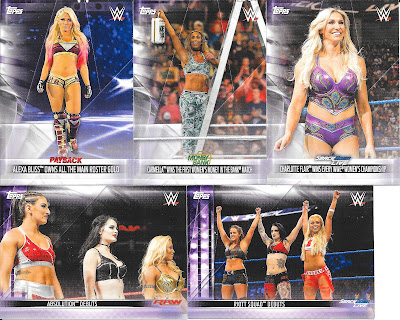 The Women's movement continued the documentation of the push to equal footing for the women, and these cards are all pretty nice too. Though a fan of Flair's work in the ring, the personality comes off a bit harsh at time.

We get to see Paige, who is now Saraya in AEW, and hopefully she gets to leave wrestling on her terms, instead of how she had to be shelved in WWE due to injury.

One more day of wrestling cards still to go in the cards from Shaw Racing, but before we go, a PWE trade with TCDB member tucha... 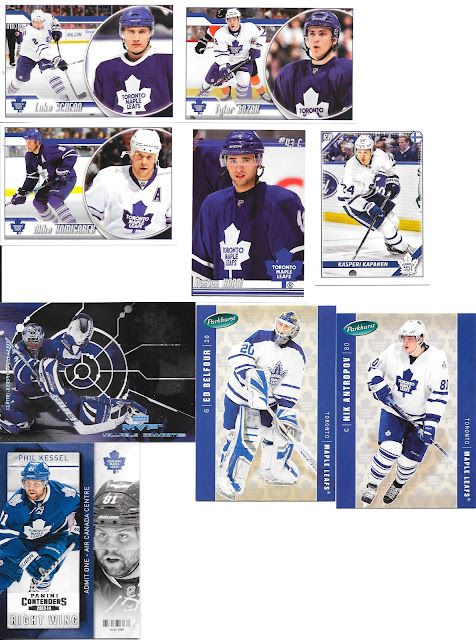 A smattering of Leaf cards which include some one off inserts of Leafs like Cujo here. 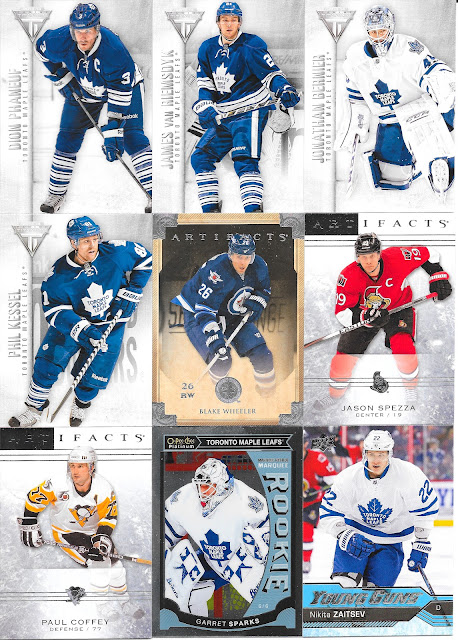 The 4 Titanium cards here are all the common retail pure base cards (base cards that are not SN or short printed), so that's nice. As is getting a few Artifact base cards for sets I am slowly collecting.
I have picked up a few YoungGun cards in trades lately, though not specifically on purposes. If anyone does have a spare Auston sitting around they don't want, I can find a home for it. :) 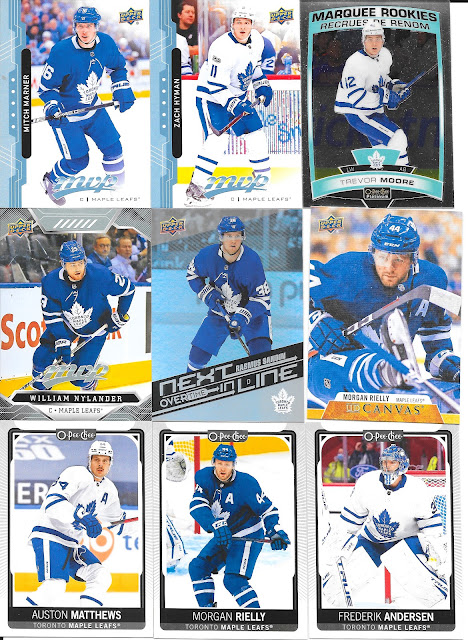 That Next In Line Sandin is a nice Leaf insert card though, and again, a few more O Pee CHee base cards to wrap this one up.

Big thanks for the trade!