An Adventure Worth Taking?

So it has been a while since my birthday, when I got this and it was relatively new: 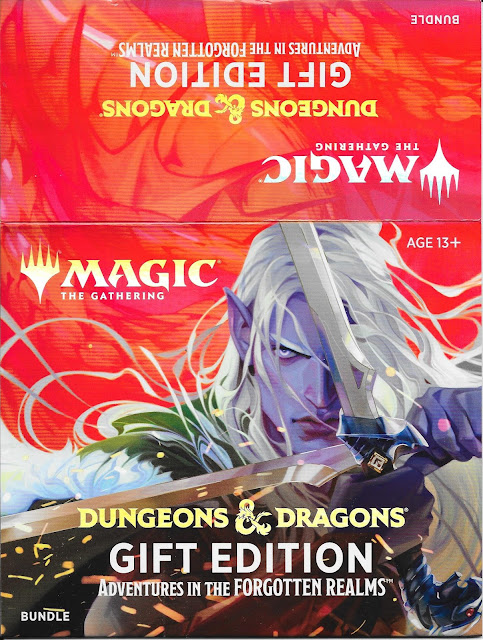 It was a way to get the couple unopened packs I needed for my collection, but with more to it, as shown on the back of the package: 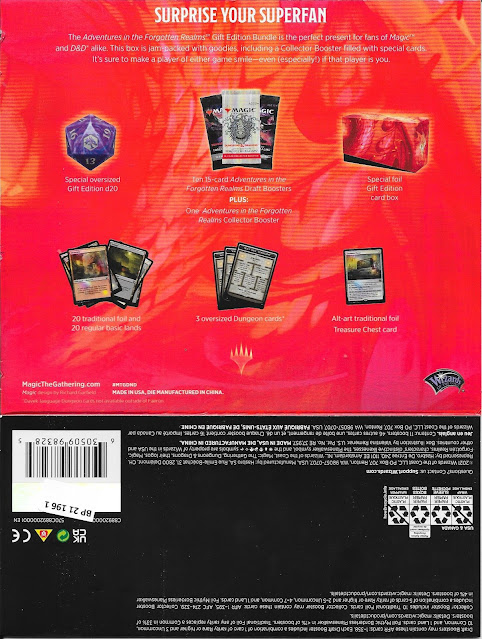 The oversized dungeons are a keeper - not sure if I should consider them artifact cards, but for now, close enough, so those are a nice pick up as well. I am thinking they are just as good to consider artifacts.
Also, the lands aren't a big deal but nice to get the artifact alternative art card, and the storage box is alright as well.
This was also included: 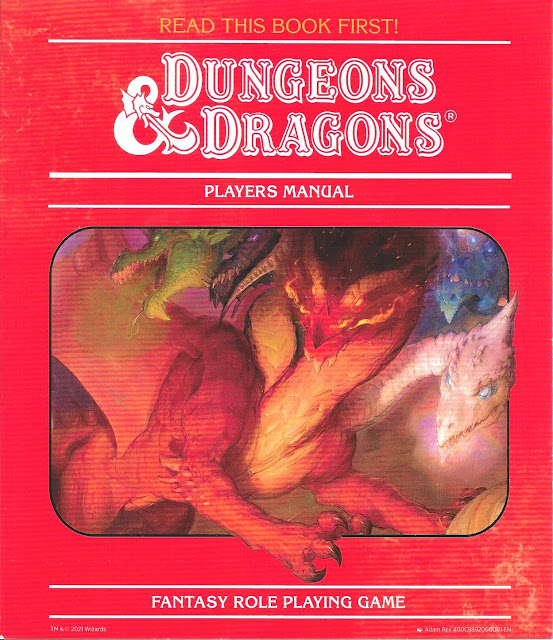 A cute enough advertisement, but let's get to cards instead...

The oversized dungeon cards as mentioned, and.... 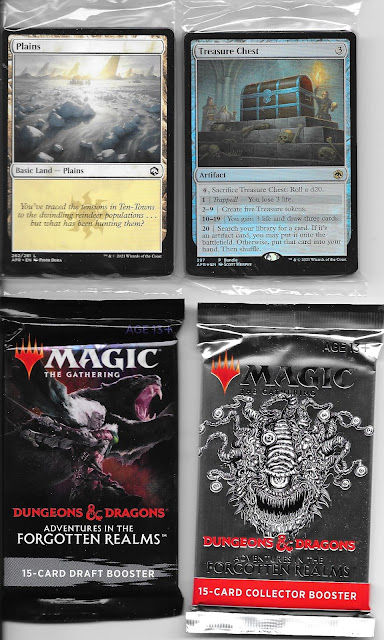 Land packs which I will open and not bother sharing here, as well as the collector pack and one of the draft packs for the unopened pack collection.
Rather than spread them out, let's open the 9 remaining packs and see if there is anything else worthwhile here for myself, and in general.
Pack 1: 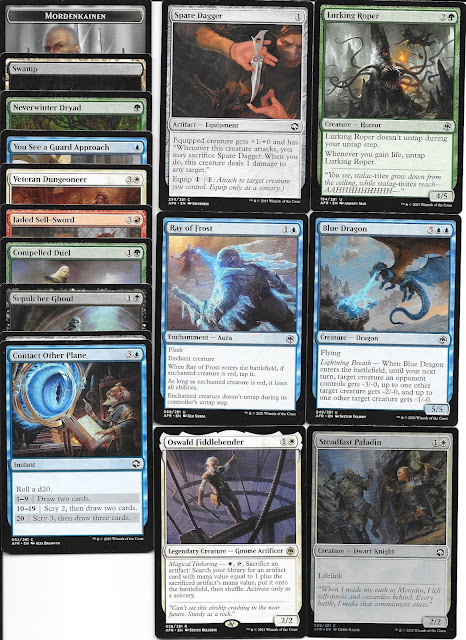 Not a big value first pack. I do get a common artifact card, and didn't notice when I scanned, but one card shifted - can't see the +2 Mace, but the Contact Other Plane common does a good job of showing another d20 mechanic for the game.
Doesn't show in the scan, but the foil has a streak in the foil right across left to right running half an inch into the picture from the top. A problem with recent foil printings sometimes unfortunately.
Pack 2: 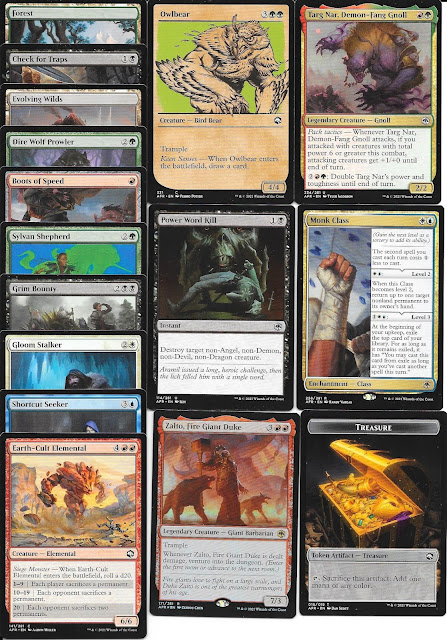 Two for two in getting foils, and a rare here with Zalto. It also shows how the dungeon cards work as some cards have an ability to move along the dungeons.
Only an artifact token to keep, but a nice alternate art card with the Owlbear. Look more like an angry Skylander.
Pack 3: 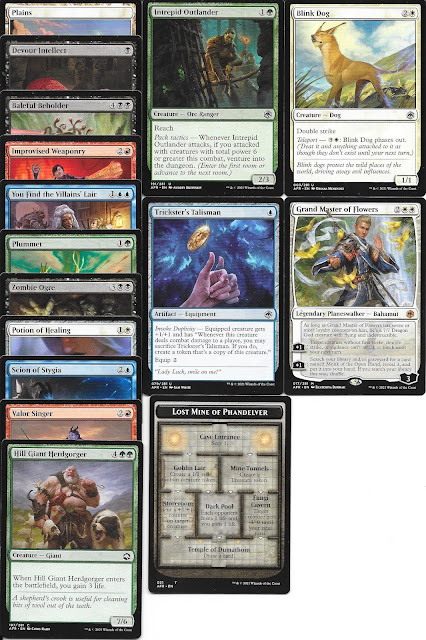 The Mythic Grand Master of Flowers card is the most valuable thus far, but the pack doesn't do much for me, save for the dungeon card. I think that is the first planeswalker card I have ever actually pulled from a pack.
Pack 4: 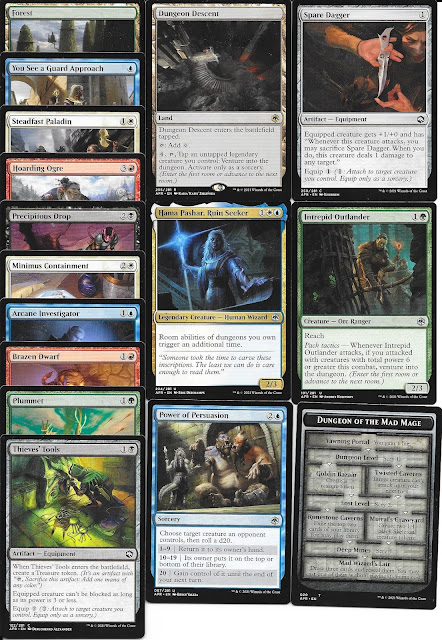 Not too shabby with this one - not only a second normal sized dungeon card, a second copy of Spare Dagger, and what I would call an artifact land - a land that provides colourless mana, so will keep that one too. Three cards isn't too bad!
Pack 5: 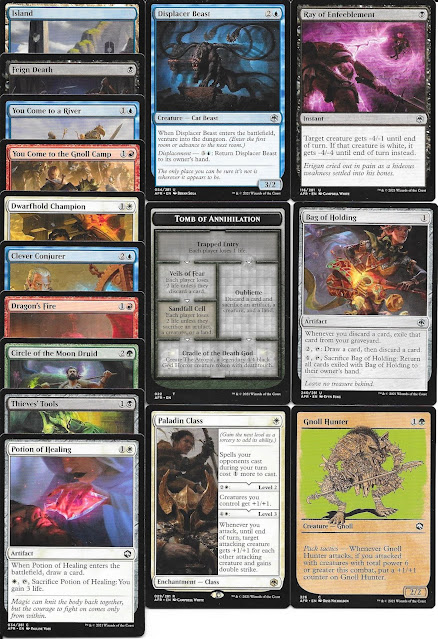 Well, that was quick in picking up normal sized dungeon cards for all three. The Class cards are another interesting multistep card, and throw in a Bag of Holding artifact and alternate art Gnoll Hunter, and this is a pretty decent pack throughout.
Pack 6: 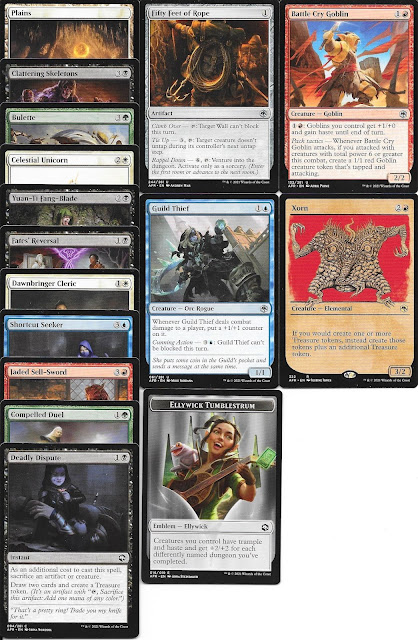 Fifty Feet of Rope is another solid card for showing the different abilities on cards with this set - being able to make choices and have multiple possible abilities. Besides which, the related abilities make sense to the card - always a plus.
Another alternative art card too which is nice, though would love to get an artifact one.
Pack 7: Another Treasure token - will take that, no problem. A couple legendary creatures, though no significant value, and a cool looking alternate art Pixie Guide. I will say, as it has been a while since I actually opened new Magic card packs, there is enough here that it keeps it interesting, even if I am not hitting any major cards for keeping myself.
Pack 8: 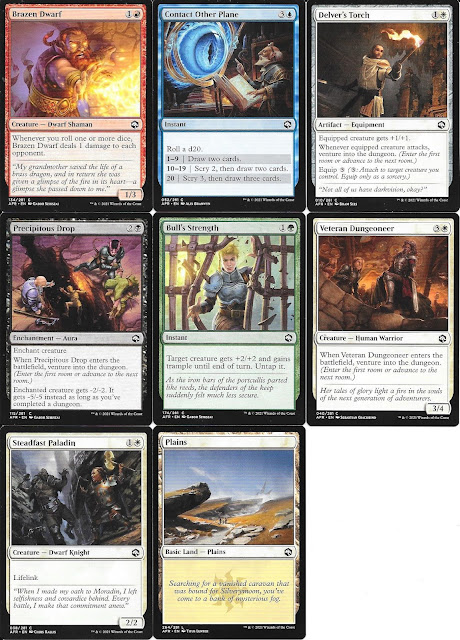 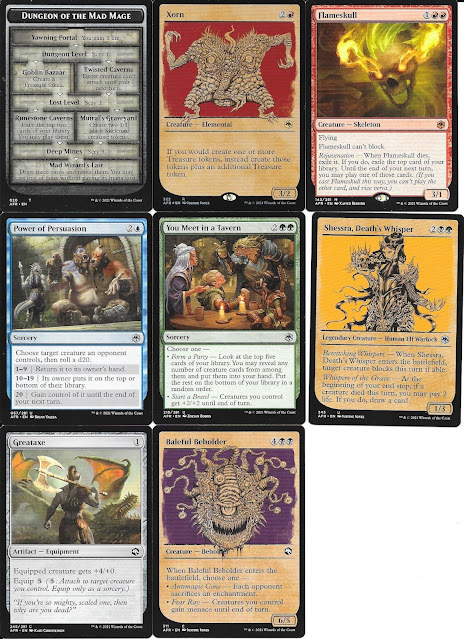 Lots to look at here, but it does make me wonder how often the alternate art cards come up and whether they are really random - I mean, three in one pack, including one being a foil. None of huge value again, but atleast the Baleful Beholder is the card used for the collector pack artwork - so there's that.
Pack 9: 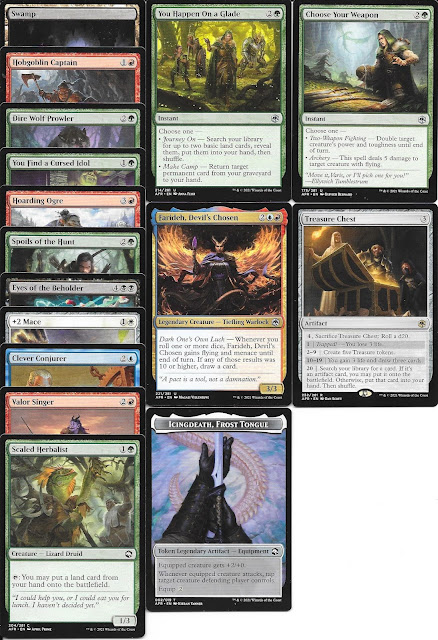 A couple more keepers, including the rare Treasure Chest, though again, not big dollar value, and the token.
Overall - I got my money worth out of it with the packs being kept and the fun of opening packs, but not a home run opening. Either way, a fun little romp to go through.
Know what else is fun? Finishing off with the cards I got from www.baseballcardstore.ca which are the error cards and a couple other items Steven threw in that he knows I enjoy and collect. 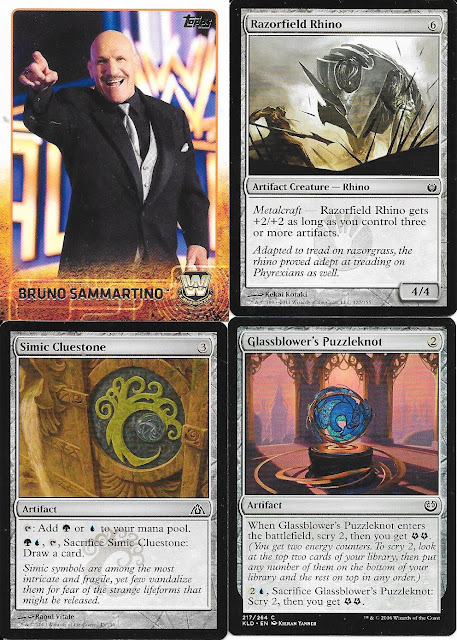 Always nice to add a wrestling card I don't have, and Bruno is a great of course. A trio of artifact Magic The Gathering cards. I believe I have one of each already, but as I have mentioned, I collect and keep 4 of each to have a full playing set if I so desire. 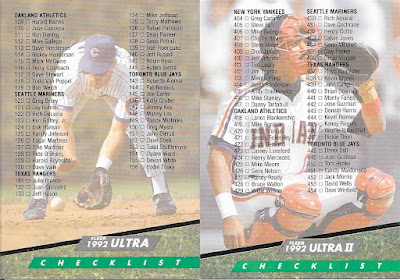 I had separated these thinking they were not Jays cards, but in fact, they are. The checklist is done by team, and these two checklists include my Jays, so will put them with the team set.
Lastly, the miscuts... 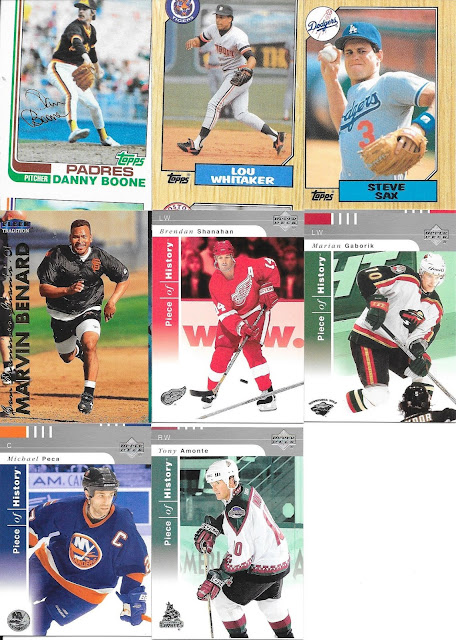 The Piece of History set cards are just a bit miscut top to bottom. Still great for the error binder, but a small error when you compare them to the top row. So Boone, yeah, really far off there and Lou Whitaker is not much better. Love the uniqueness of these.
Another big shout out to Steven for his work with the site and providing another solid place for picking up some cards without having to leave your desk/computer.
Posted by CrazieJoe at 8:00 AM