Even if it's a set I would never have purposesly collected, I love when I go from never having heard of a set, to completing it. Today, we get that with 1988 Dinosaurs Attack from Topps. 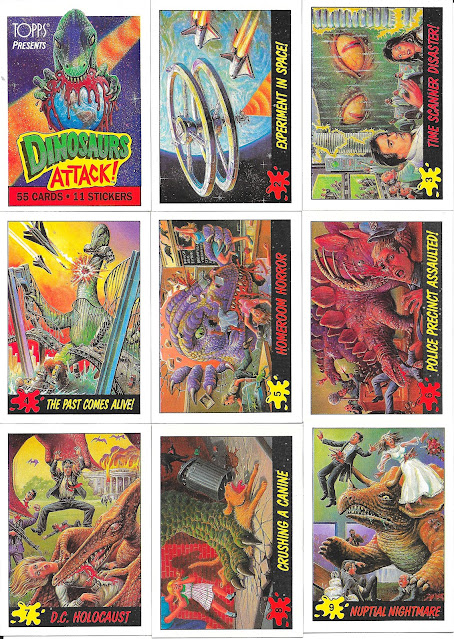 It isn't a large set, but this set out of 1955 was sold in 5 card packs which also included a sticker card in each pack, and of course, your piece of gum.
As you can see from the first cards, it's all about Dinosaurs attacking the world, with some very colourful artwork which is done much in the style of older style monster movies from the 50s or 60s. They kind of remind me of those movie ads like Attack of the 50 ft. Woman. 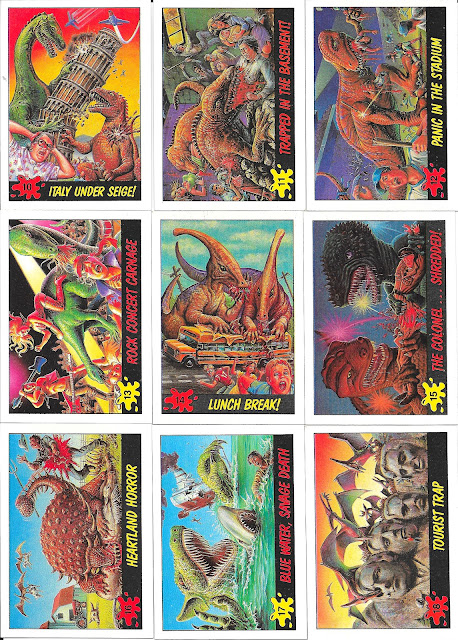 As these were released in 1988, I'd still cover these as being in the "they will make a set for just about anything" phase of card manufacturing...also called the junk wax era. It was definitely a set that, at the age of 8, would have been a bit too gruesome for me to collect. Heck, my mom wouldn't let me collect Garbage Pail Kids as a kid...though looking back, I can kind of understand it, but I didn't get it as a kid. 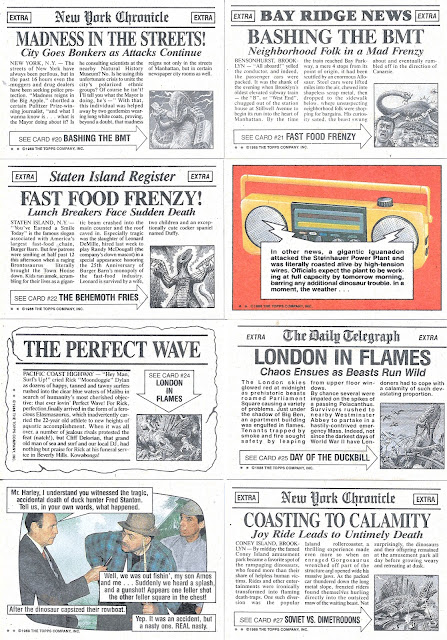 The backs of the cards are really done well. I love the old newspaper design to tell the story, and the tie together of the cards. There are some other different back of card designs as you can see, like the comic strip type as well, but the majority are the newspaper design. 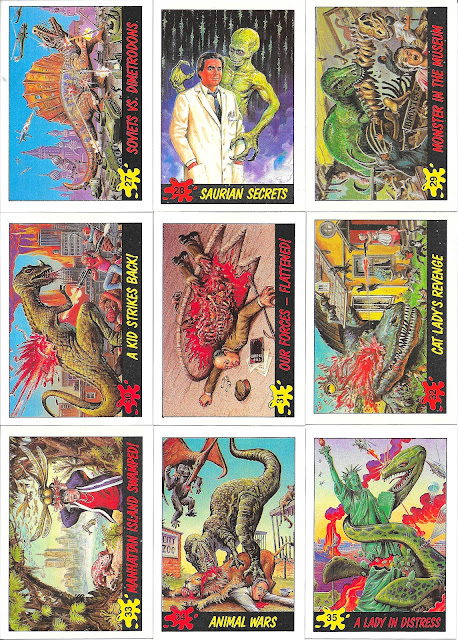 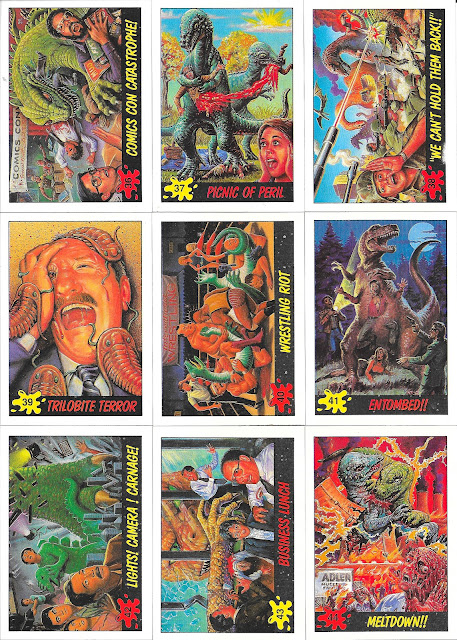 The artwork is done really well on these, and I think stands up pretty well over time. 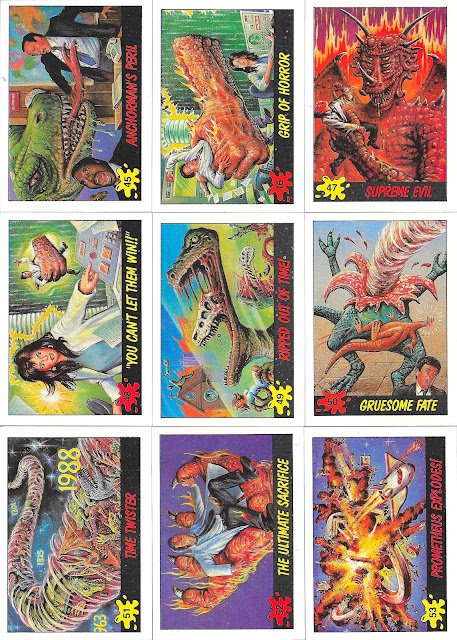 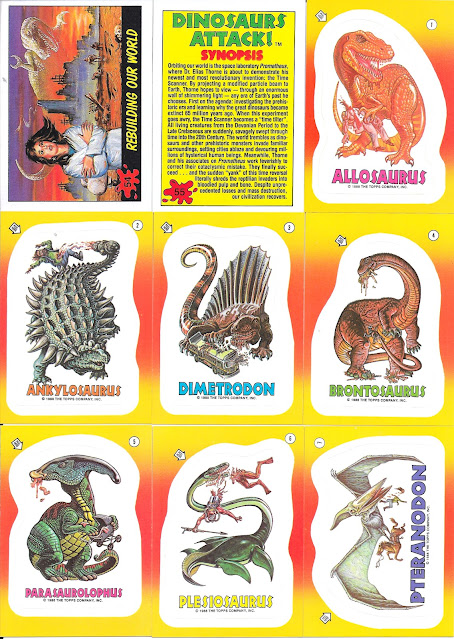 Even the inserts as a set are done well - though my only complaint is, I would have liked to see just as many of the stickers as there are base cards. The stickers themselves are neat, but the backs are just as great... 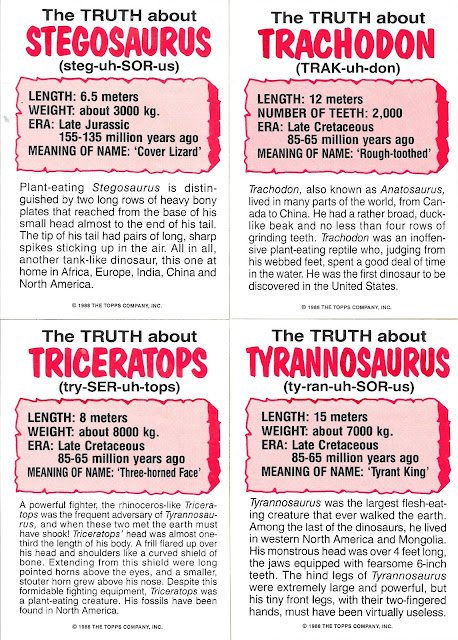 Learning! Love when they sneak some good old fashion learning on cards, like how to say the names, size of the dinosaurs, and a decent write ups too.

Would I ever have tried to collect this set...nope...never would have been on my radar, and if I didn't get all of it, I wouldn't have gone to try and finish it. Now, will I keep it? Absolutely! 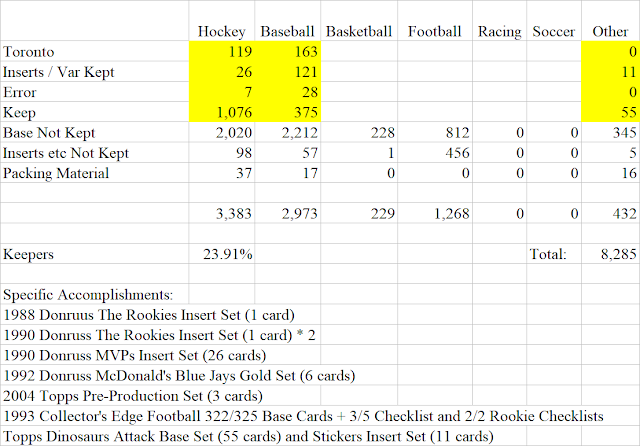