A Different Post and a Doozy of A Trade

The lot today provides a different Post. A couple more Leafs which is always a good "usual"... 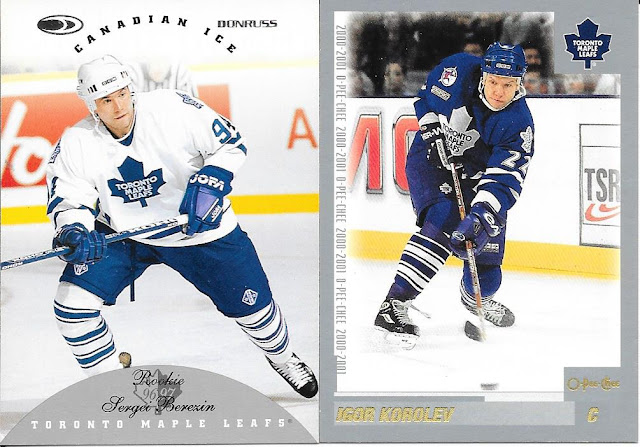 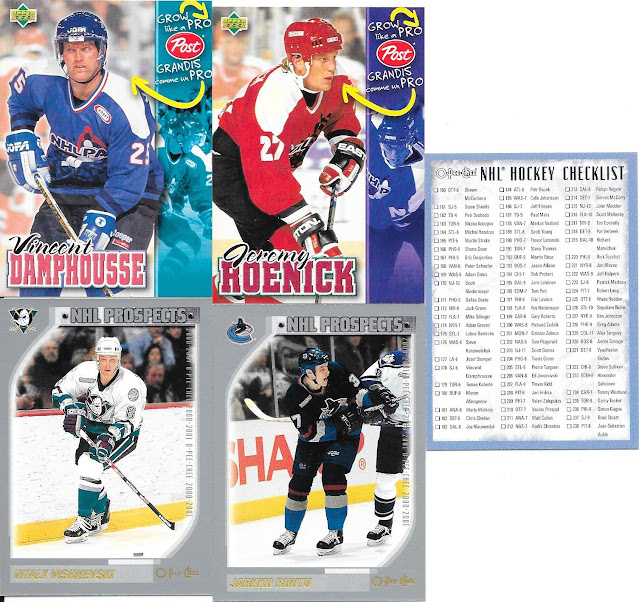 Along with a few other insert/short print 2000-01 O Pee Chee cards, we get two Post hockey cards. These cards were done by Upper Deck and are the 1996-97 release. I get that times have changed, but wasn't it fun to get cards (or even small toys) in cereal boxes? I still like whenever cards are packaged with food. Besides, it was always fun with cereal to see if you could get the cards out, which inevitably had gone to the bottom of the bag/box, without dumping any cereal out.
Not much else for keeping, but there are these cards as well... 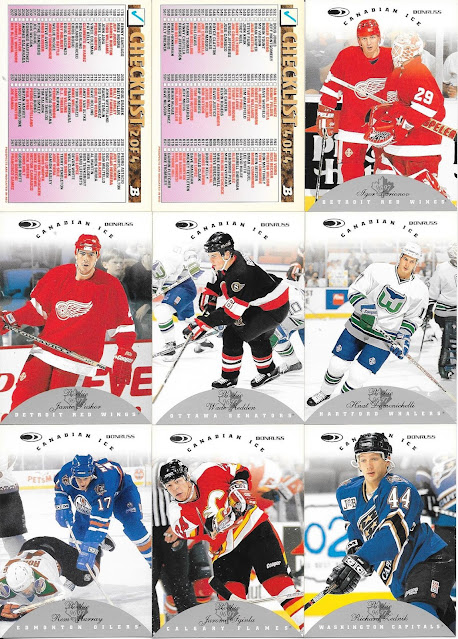 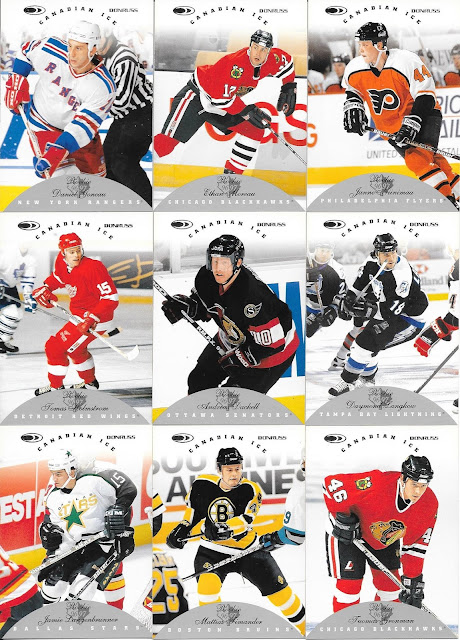 Yeah, Canadian Ice from Donruss continues to taunt me with a fairly complete set...just daring me to try and finish it.....we shall see... 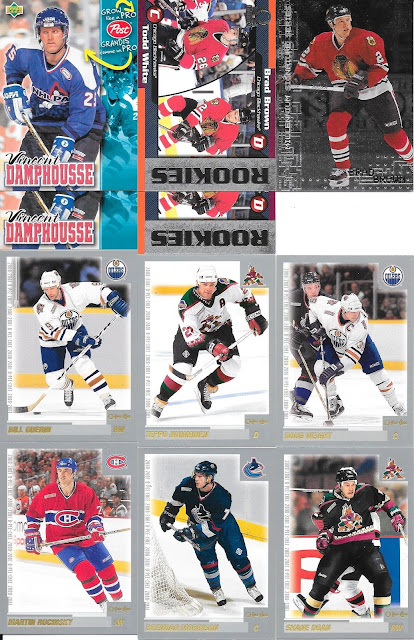 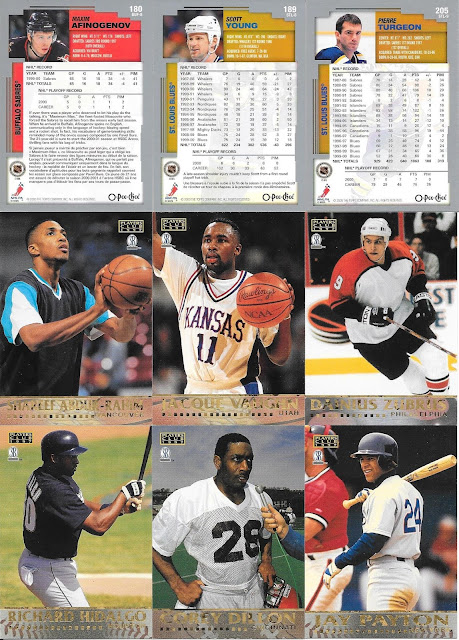 I do want to point out with the 2000-01 O Pee Chee, I like the team numbering done under the card number, so you had a better idea of which team cards you had and could checklist them.
At a glance, I think a couple of the 1997 Players Club cards are new to have popped up to. 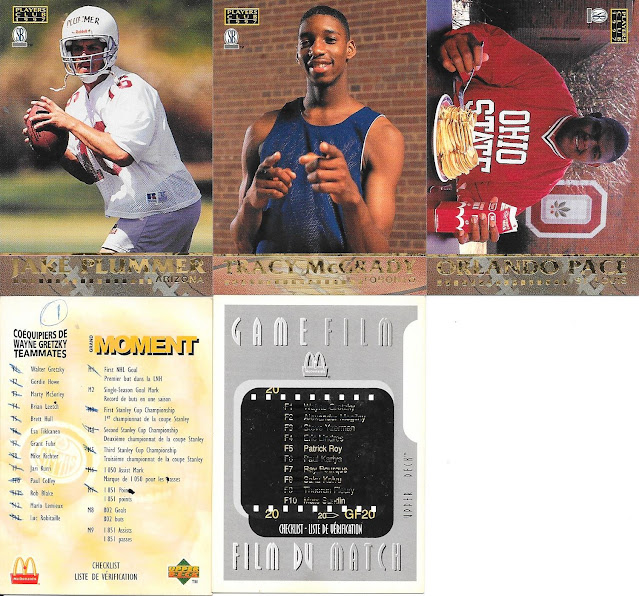 I really want to keep the McD checklist inserts here, but both are written all over which keeps them out of my collection. They aren't worth keeping as place holders - the checklists aren't crucial wants for me that way, but they do tell someone's story of what they had, and what they were still missing. 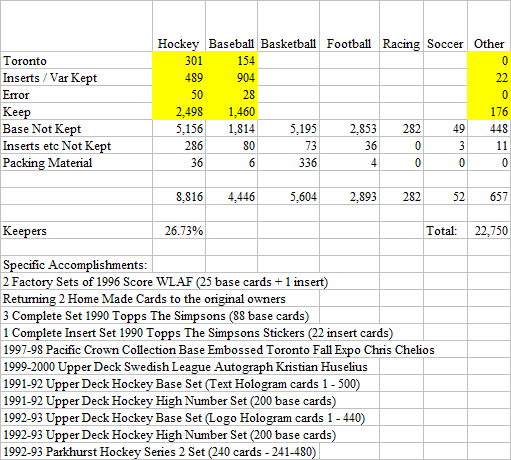 Let's end with what has to be the biggest trade I have done on TCDB. Many ways to measure "biggest" and my measure here is based on hits involved. Fellow Canadian, and TCDB member martinchabot reached out with a dozen different TCDB entered trades as he was learning the process, but the bulk result was - he was looking for a couple hundred base wrestling cards and offered up a couple dozen or so inserts/parallels/hots in exchange.
It was a great way to send off a bunch of cards are be net "down" and get cards I wouldn't have otherwise received. So what were they? 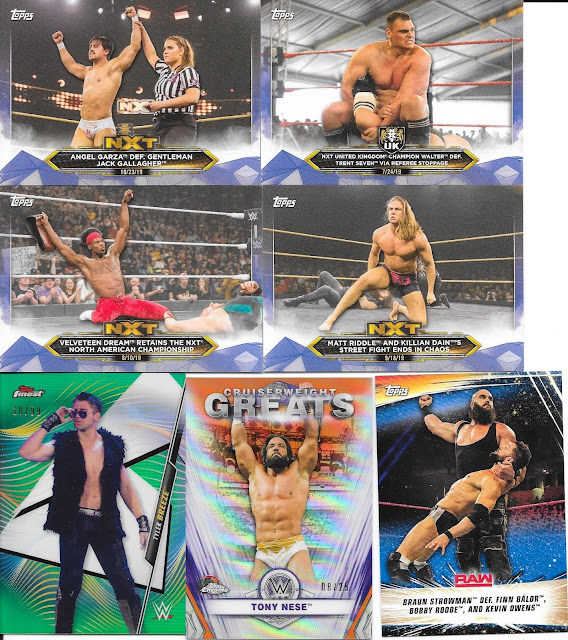 The top four are blue parallels numbered to 50 on the back, Braun is of 99 and the last two are SN'd on the front. A bit of a surprise to myself, my fave of these is actually the Breeze Finest card, though WALTER is always a brute. 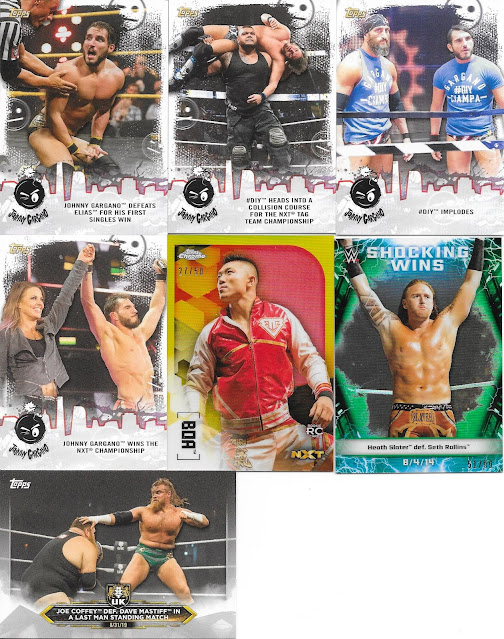 Four Johnny Wrestling inserts - man, I miss #DIY - great days of tag team wrestling in NXT, and it was just in 2016-2017.
Boa has been in NXT for the last 5 years or so and hasn't made it up really to the main roster, but has been doing alright. Cards really nice with the gold parallel.
Those are all great, but it gets better. 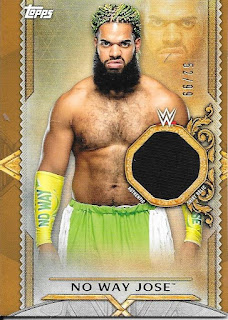 Though it was limited in upwards potential, I really enjoyed the happy go lucky No Way Jose versus the "tough guy" here, but an SN hit like this - awesome! 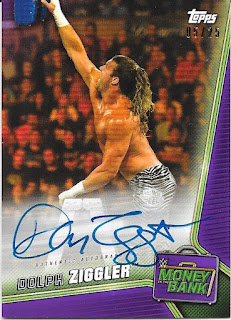 A purple parallel numbered to 25, autograph for Dolph makes him this first person I have two autos for, though the other is an in person auto, still counts! A great hand and solid member of the roster. 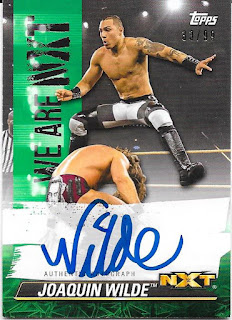 More known for his time on the indies and TNA, Joaquin has had a bit of time recently in NXT. 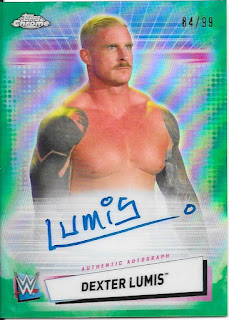 Dexter is another one that had a lengthy career before making it to WWE, though he has finally started getting a bit of a push recently. An interesting character, though not sure how he would fair on the main roster. 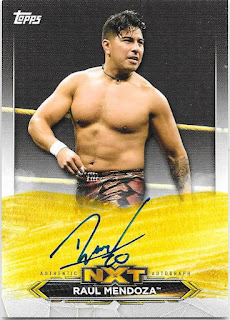 A solid Cruiserweight, a handful of years with the WWE civision, which is nice, but not exactly high profile. He continues to kick around the NXT ranks. 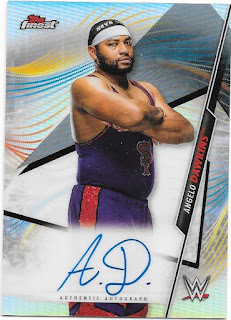 Not the most detailed signature, but a man who made it with the Street Profits first in NXT, and done well on the main roster too. Nice to see him having solid success after working so hard in NXT.
Last up... 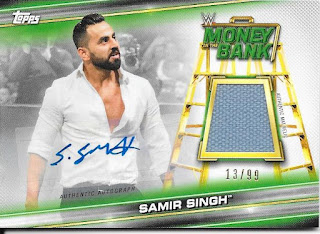 Sure, he may not be Hulk Hogan, or a main eventer, but when you are talking about an autograph, a piece of memorabilia, and a serial number...I mean, dang! The green colouring with Money In The Bank - great card.
If I could change a couple hundred cards into a few like this, would do that again anytime - the trade is very much appreciated!
Posted by CrazieJoe at 8:00 AM