One shagadelic card (Bobby Orr)...and some Ausin Powers ones too

Hello, and welcome to the quick preview! Since this quite the lot of cards coming from Santa I will creatively refer to these as the Santa Lot of 2015.

So in getting Santa's gift first into the house, there were time items I took out right away - one because I wanted to get it right into my collection, the other because of the...um...uniqueness. 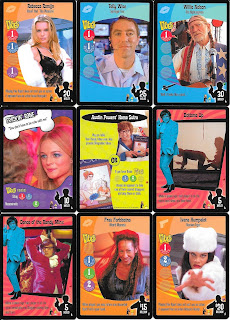 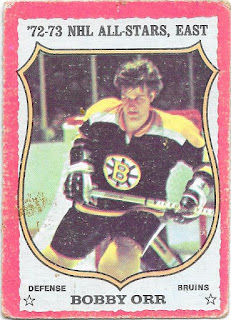 You can probably guess which is which. The Bobby Orr All-Star card is in acceptable condition given the age, and not one I would spend the money on buying - so this is the best way for me to get it into my collection. Although not really an insert, given it is an All-Star card, I will consider it such for my purposes. As for the Austin Powers cards, there were roughly 175 which I skimmed off of the haul, the ones scanned above just being a sampling.

I'll admin, I took a look at exactly what this Austin Powers game was and an intro video to see what it was about. Having learned and played Magic The Gathering, and currently learning Pokémon to play with my son who is interested in it, I can honestly say - the Austin Powers game made no sense to me and I have no interest to play.

So, if anyone is interested in the Austin Powers cards, they are (unsurprisingly) up for trade.

I am hoping these two items are a sign of the wide range of stuff that the Santa Lot of cards will contain...should be interesting!
Posted by CrazieJoe at 8:00 AM