Finally....the rest of the massive Jays box from last weekend...

In case you missed it, this is the last post related to the big Jays box I received just before last weekend (the first two posts were done last weekend).

Here we will look at some highlights from 1992 sets and thereafter - plenty to look at so let's get started...

Love the Donruss King cards, and nice that it is at least different from the two other Joe Carter cards here. A bit surprised the picture used on the Highlights card would be so similar to the regular base card for Joe. 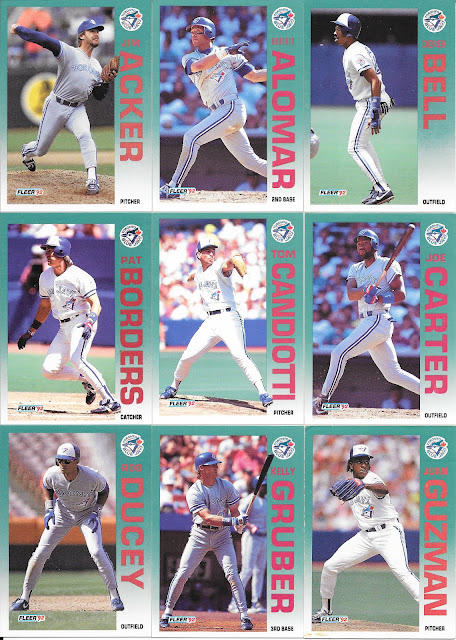 Some of the almost complete set of 1992 Fleer cards in the package. Since I had most already, this did well to fill the missing holes and provide a complete set (was missing about 7 including Acker and Alomar). Personally, I prefer the "ugly" 1991 Fleer to this set, the green border bothers me more for whatever reason. 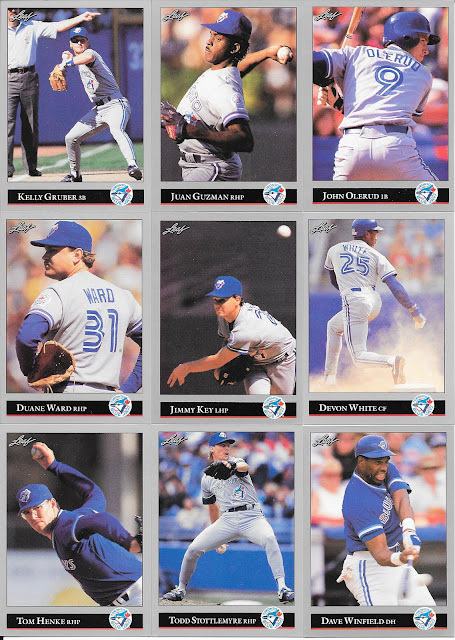 I like the simplicity of the set, and the obvious effort coming across from Winfield in that swing..you can see the power exertion! 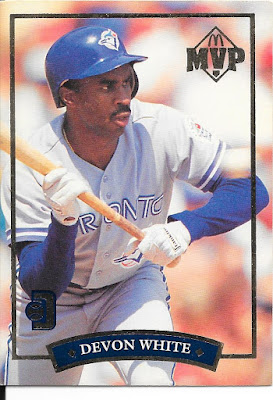 This is apparently a 6 card insert set to the McDonalds set. I hadn't seen these before, but have this one of Devon now which is great (and makes me really want the other 4). 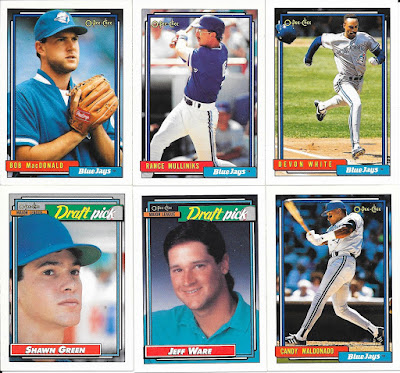 Shawn Green is so young here - unlike Rance who appears to still be sporting his 70s 'stache. I only had the Green before, rest are all new and I am still missing a number. Not sure why I have so little of this considering O Pee Chee is Canadian made. 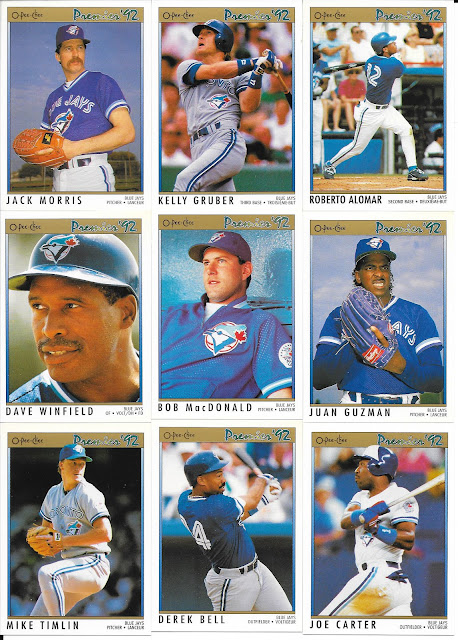 Well, in and out quick with this one as the entire 9 cards were included so I have the full team set as shown. 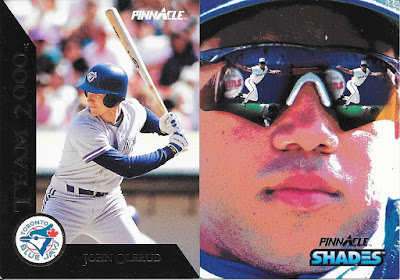 Made great headway on this set as well, but two cards really stand out. The insert for Team 2000, John Olerud, as well as the base card of Alomar make great Jays collection adds. I think Olerud in 2000 was a bit of a stretch, but get what they were going for with the insert set. 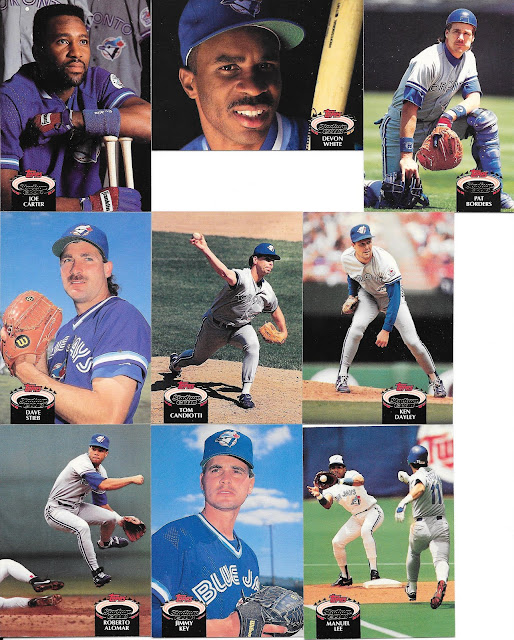 I went from having three cards from the Jays team set, to now only needing three. Given the team set is about 30 cards, that's a huge change. Just some of the cards above. Typical Stadium Club - love the Manny Lee action shot, catch at second, and even the posed shots are done well like Carter and White. 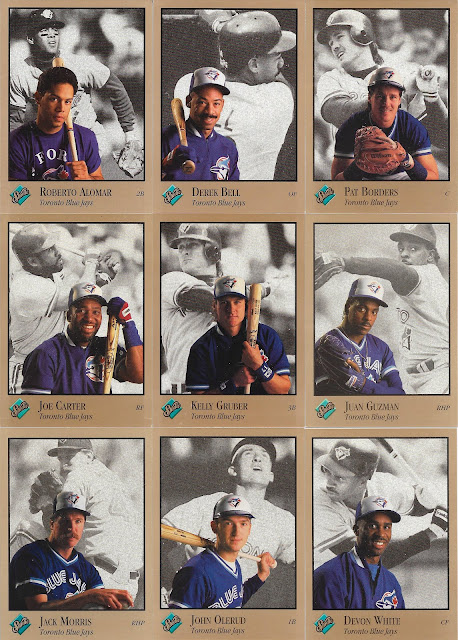 My personal preference is the previous year version, but this is still a great set and a different design than typical. I had been missing just one card from this - Joe Carter, but to make sure, I got the entire team set! Aove are 9 of the cards. Since I didn't scan Dave Winfield, let me share the up close fact with you...his hobbies include photography (evident from being on this card), travel (would need to in order to play in other cities), physical fitness and sports (um...kinda obvious). Okay, so that wasn't so enlightening... 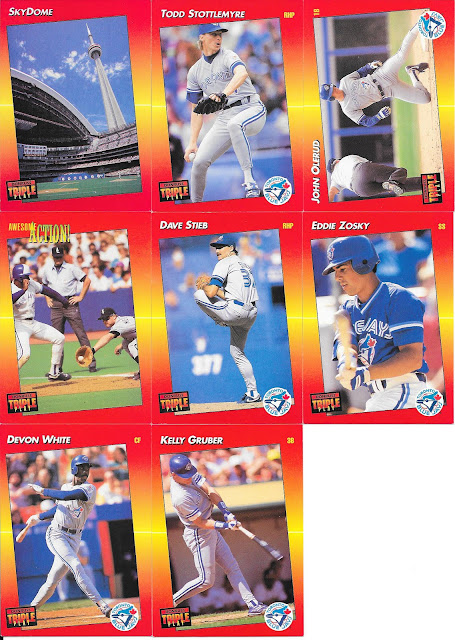 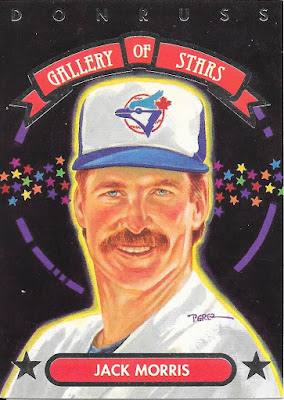 Gotta love the Skydome card. I am now only missing the Joe Carter card from the team set, assuming there are no other "Jays" cards similar to the Awesome Action card. The Diamond King knockoff insert set is fairly well done - no real complaints and Jack Morris is a fair enough subject for it. 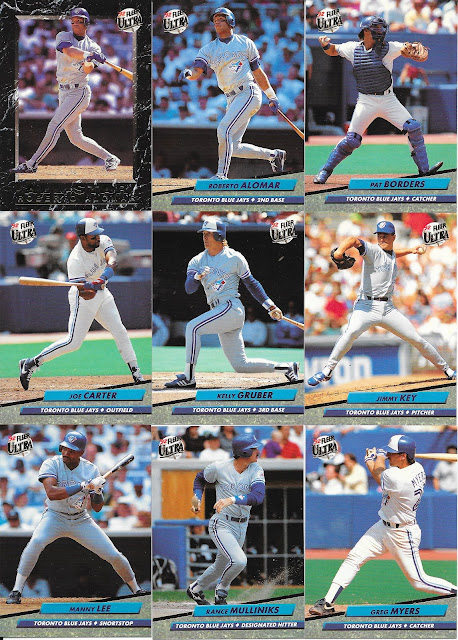 Another Jays team set I was missing many of the cards from and now have a complete set, and the one All-Star Jays insert - excellent! 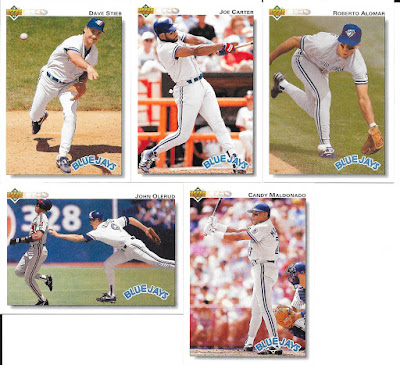 A handful of '92 Upper Deck, but one of my fave cards from the set - Olerud with the huge stretch to tag out a runner. 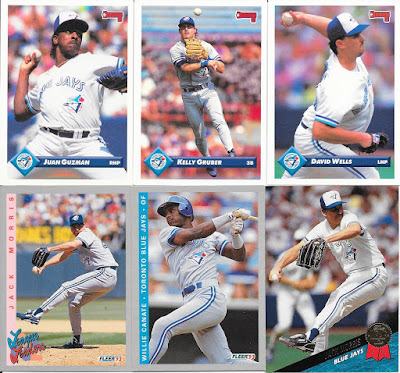 A few odd cards here - which other than the Guzman card, I needed the rest of them. Didn't realize Fleer had a Final Edition set until I got the Willie card here. 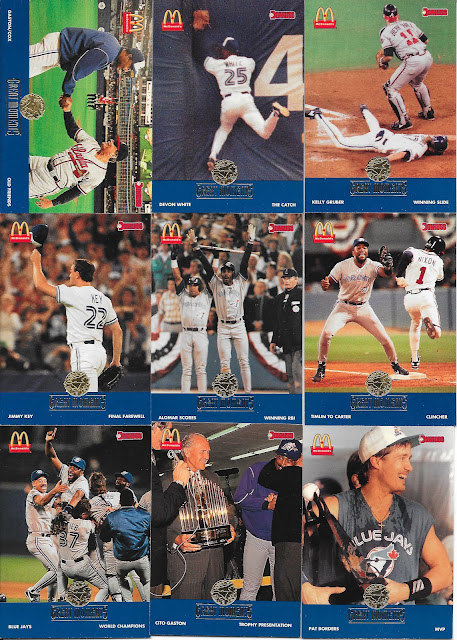 This is a set I enjoy for highlighting moments in the Jays history, and done fairly well too. This also marks the 100th card for my second player - Pat Borders - with MVP card noted. Any Jay fan will also remember the picture of Joe Carter in the bottom left just after winning the World Series. 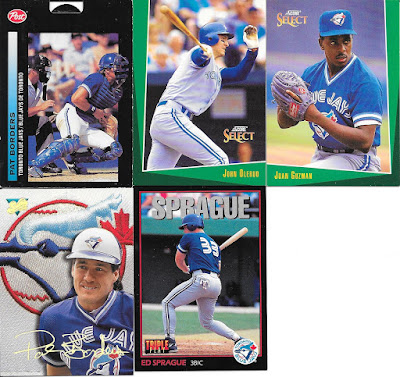 Here are another small spattering of cards. Mostly new, and the 1993 Triple Play Sprague is the first card from that set that I have received at all. 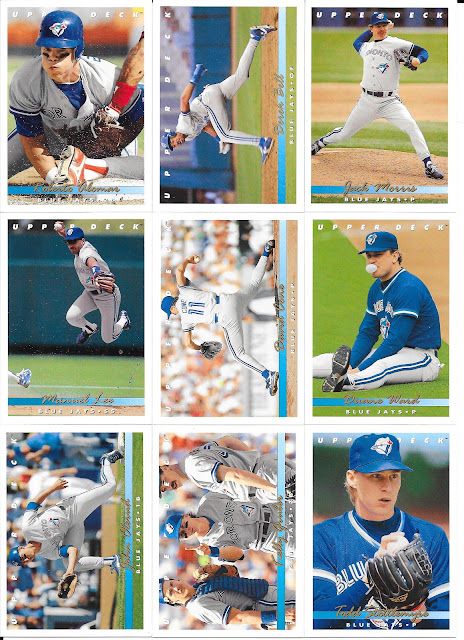 Not a huge fan of the number of horizontal cards in the base set, but that is just a personal pet peeve.A couple good photo choices with the Manny Lee jump, and Duane Ward bubble. 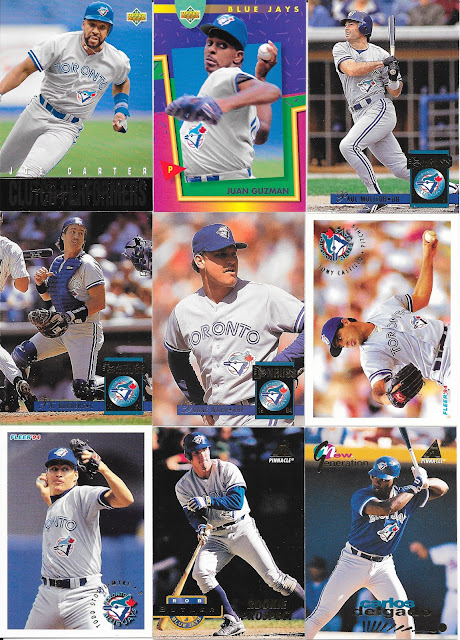 Some more 1993/1994 Jays from sets including, new to me, Upper Deck New Generation with Carlos Delgado, and I really like the 1993 Joe Carter Upper Deck insert (top left). 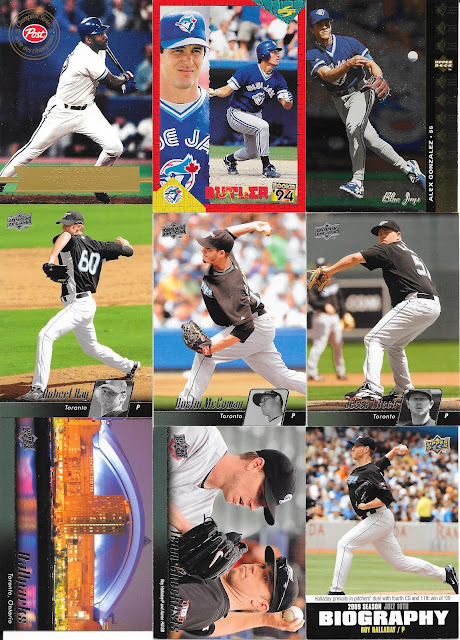 Really nice variant 1994 Post Canada's Champion Joe Carter - gold foil name plate on the front being the tweak to the "normal" card.  A big skip into 2010 of which I had no cards, so pleasant to get these, and again, especially the ballparks card - a wonderful picture.  Nice (though basic) insert with the Biography card as well.

The last item is a complete set of 2012 Blue Jays Safety cards. A great add and already on a display shelf. Here are a few 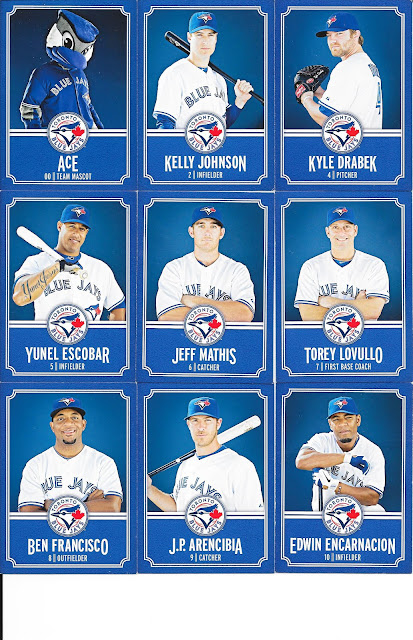 Again, a huge thank you to Trevor, and I will be pulling together what I can to try and even out what you made a quite lopsided trade at this point....