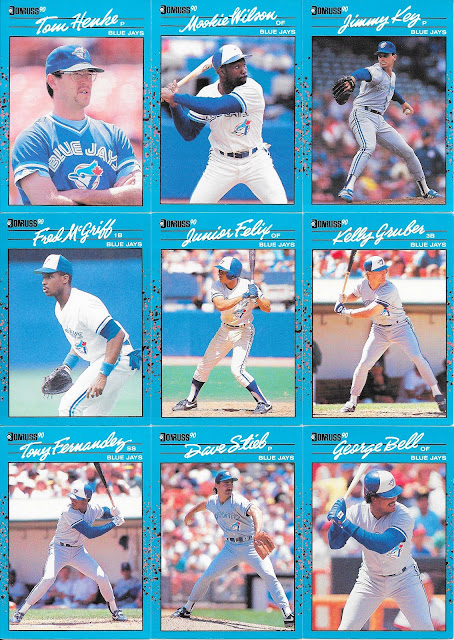 The blue 1990 Donruss set - otherwise looks the same on the front, though different on the back. I now have all the Jays except John Olerud (I had none of the 10 before). 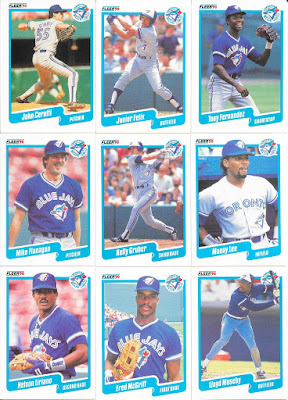 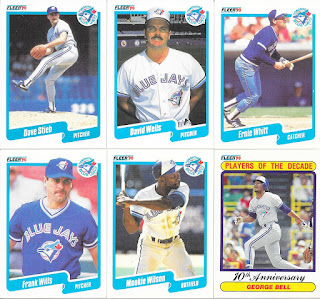 I am only missing two of the cards from the Jays team set here, big name players...Lee Mazzilli and Rance Mulliniks...shouldn't be too hard to gets these sooner than later if I am so enthused. 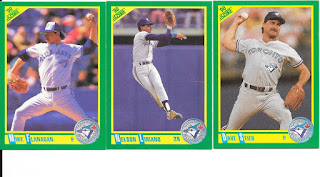 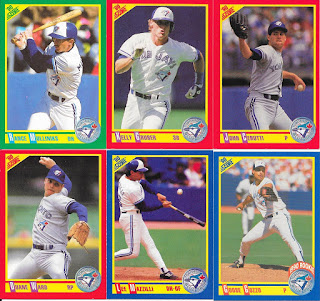 Some of the solid base of talent for the world series runs is part of the team here including Gruber, Borders, Ward, and the lead up to the back to back Series wins is underway. 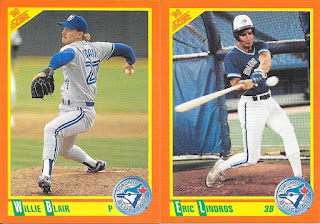 And in one fell swoop, here is the whole Jays team set for this set. Best card by far would be the Lindros card. I heard he chose hockey over baseball for some reason and did okay...

Nothing new to me, but doubles that I do need if I ever try to complete the set. Also, I always liked the team checklists, so having the Toronto one in multiple is A-OK!

Now 1991 and 1992 have a vast number of cards for each, so instead of scanning everything, I am just going to hit a number of highlights for each year....and there are still a fair number....given there are probably 400 cards between the two years....

Only had one Bowman 1991 card, only had one in this package, luckily not a duplicate. Always felt Glenallen Hill could have been more for the Jays, never quite reaching that full potential.

As for 1991 Donruss, I think everyone and there mothers has seen this set to death - it was everywhere...even so, I still love the Donruss Kings and MVP cards from this set. 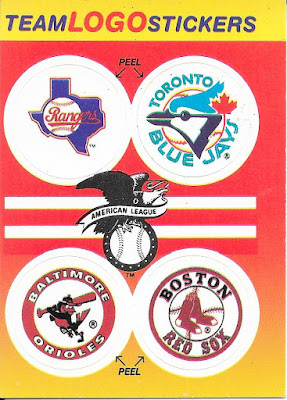 1991 Fleer - the yellow set - one of the ugliest sets to most, but I still finished the base set and have it tucked away. That said, I haven't completed the sticker insert set, so first, I needed this for the set and second, needed it for the Jays collection (and accordingly could always use a second!). 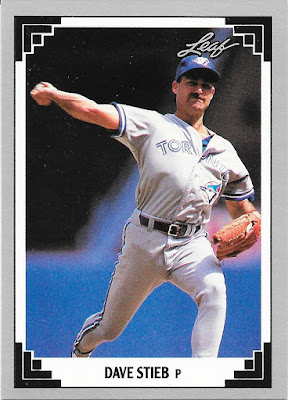 And here it is - the first player for which I have 100 cards total - Dave Stieb. I have 58 different cards, but 100 total. I am surprised that, based on tradingcarddb.com, Dave only has a total of 347 different major league baseball cards. Factor out that some will not be Jays cards, and I have about 20% of all his cards apparently. I would have though he would have many more, but I believe it. He retired before there were 100 different cards for a player in a single released set. Just timing, and he not being one of those players (like Roberto Alomar) that would have many cards made well after their playing days. 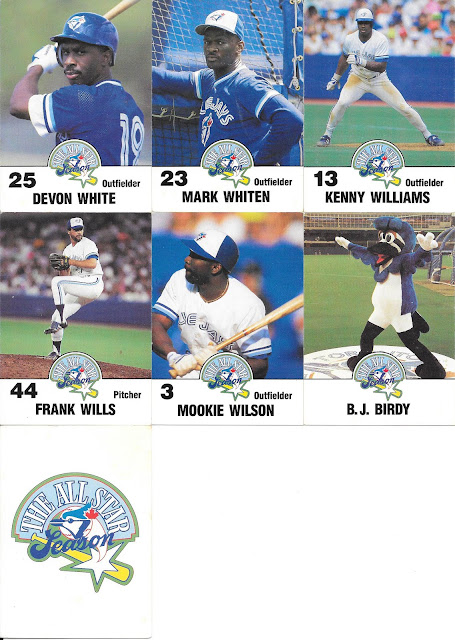 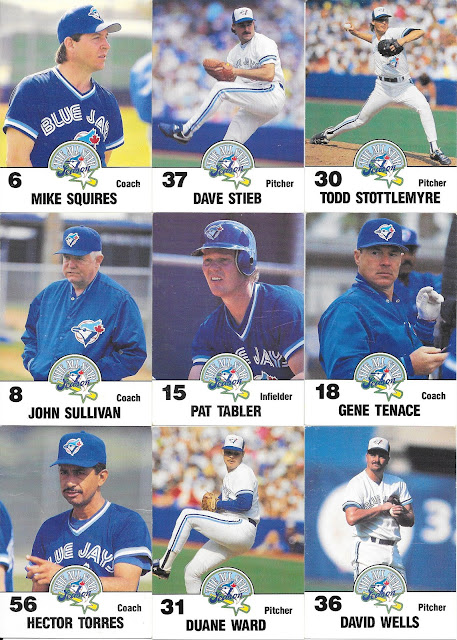 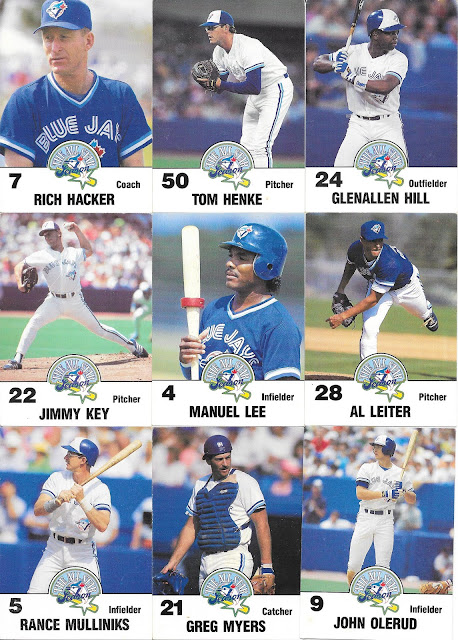 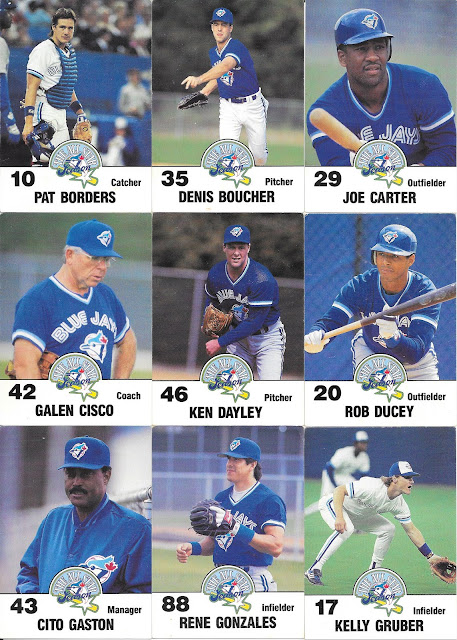 Also received almost all of the 1991 Jays Fire Safety set which was new to me - just missing 2 cards now - Acker and Alomar. Like these now hard to get sets and the photography which is just different from standard baseball card photography. I think it may be to do with the significant increase in batting practice, spring training, after the play shots compared to your standard Topps sets these days.

These weren't the only oddball cards either as I also got a few 1991 Post Cereal Canadian set Jays as well....

The following were also new for me... 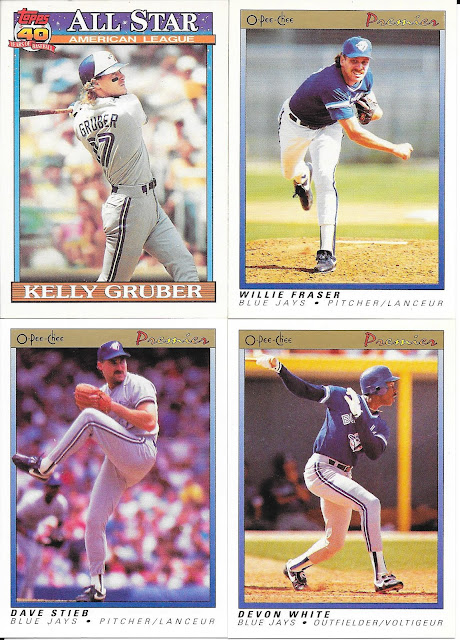 Of these, the 1991 O Pee Chee Premier cards completed the Jays team set for the set which is excellent. Surprised I was missing this Dave Stieb card, but guess that isn't the case anymore. 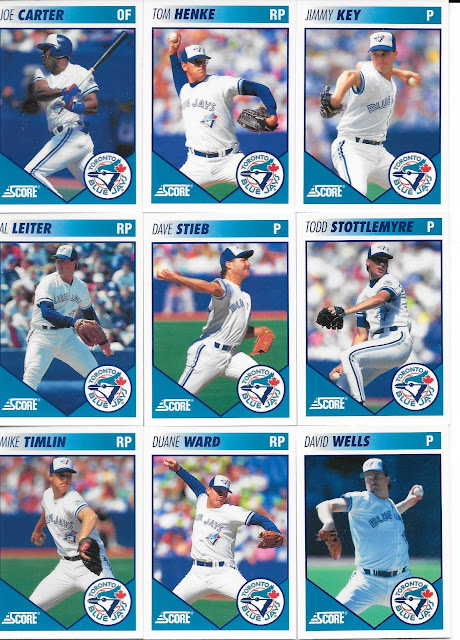 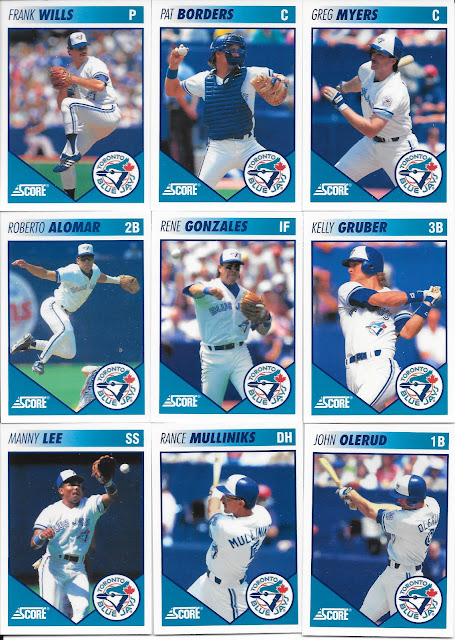 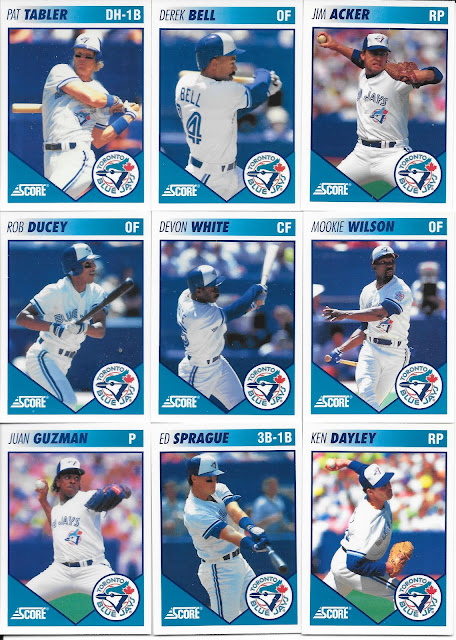 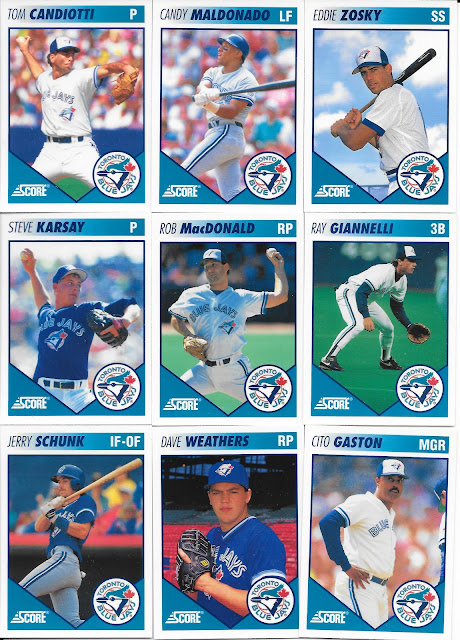 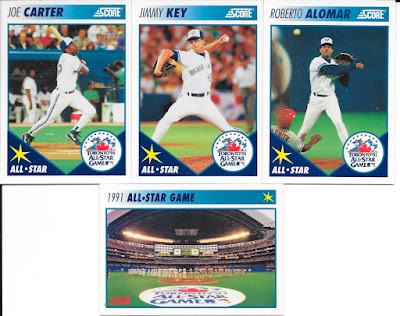 1991 Score Toronto Blue Jays....I had not heard of this set, but here it is, in full - a great pickup that has made it's way directly to one of my display shelves. Another picture of the ball diamond (one of Exhibition before, one here of the Skydome) makes one of the best cards of the set. 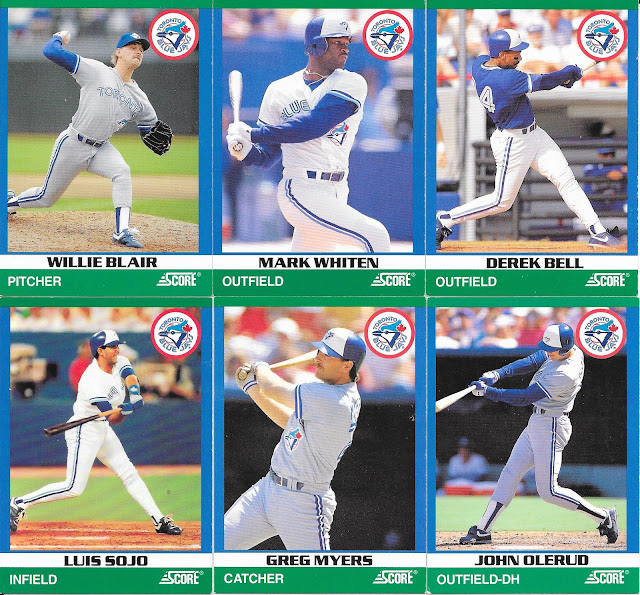 This is the 1991 Rising Stars Score set, another which I had none of in my collection before this package, and now I am only missing a single Jays card. 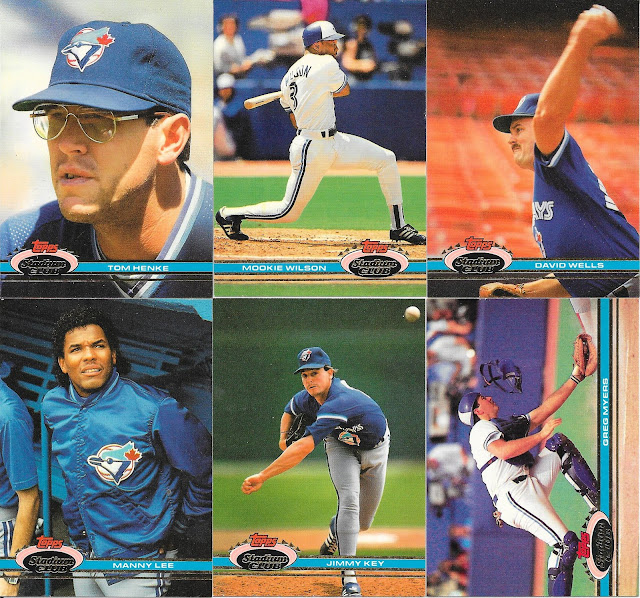 These are the 1991 Stadium Club cards I was missing which now give me the completed Jays team set. 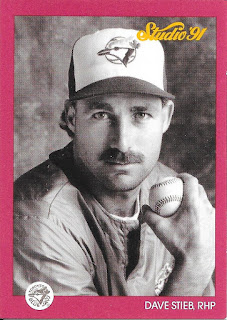 I loved Studio...I have a Dave Stieb plaque in which you can put a card. I have had his 1984 Topps card in it, but I am totally replacing it with this one...

For those wondering, also received the Jays 1991 Ultra set two times over, though I won't bother scanning them all here. Also includes the Updated set (once) as well which I will show here... 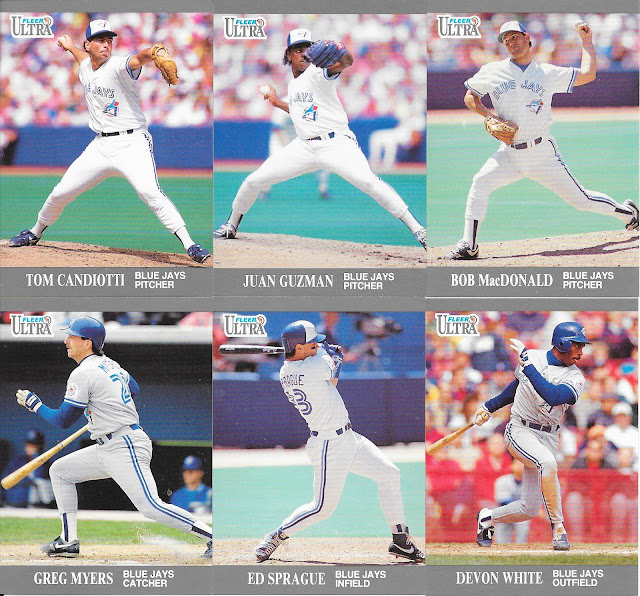 Lastly for 1991 was a bunch of Upper Deck cards as well as the following from 1991 Upper Deck Final Edition... 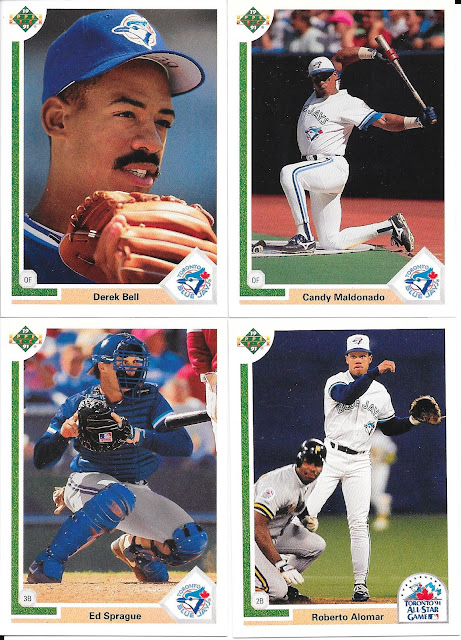 These leave a single card left for the Jays in the set - Tom Candiotti.

Wow - that was enough to get through today, I'll save 1992 and later for a last massive post next Saturday.

This has been so great and added so much to my collection, and still so much more to go.
Posted by CrazieJoe at 8:00 AM