Don't always get the Value

A side tangent first regarding value. I subscribe to the WWE Network, and for big events, like SummerSlam, my cousin and brother come over and we watch on the big TV in the basement. The big TV is a bit older (10 years - got it when we moved in), so isn't a smart TV. In the past I have hooked up my laptop to run the shows on the big screen.

Well, laptop is basically at the end of it's life, so I brought down the cable box - not a huge effort, but enough time and energy that I don't want to do it constantly. So with that one done, I looked for options and settles on a Google Chromecast for $45.

First impressions are that it is pretty darn sweet at doing the trick. Simple hookup, easy to connect to the wifi at home, and about 10 minutes to be able to cast from my desktop to it, or from the tablet to it - both working very well. The fact other things like pictures and videos, and desktops, can be cast (as well as YouTube and usual suspects), I am quite happy with the purchase so far.

Now to debate a wireless keyboard and mouse, so I can sit in front of the bigger screen to do some post writing or not....hmmm...the only tradeoff there is, I have 2 monitors set up at my computer and I usually have something on Netflix while I type - have to multitask on entertainment!

Oh yeah, cards, you came here to discuss cards....almost forgot. So, I have a fondness for most of the Upper Deck Artifacts sets. I don't actively work to finish them, but really like the designs in general, and am happy to get some of the cards if possible, on the cheap.

It was with that thought that I had to stop myself from buying all 8-9 small bags of cards at Value Village which seemed to be mostly 2012-2013 Upper Dect Artifacts base cards. I guess the silver lining is that I should be glad I only bought 4 at $2 each.

I bought them because I also don't have too much of the base set and figured they would mostly be needs. What I didn't count on, is that the cards weren't separated at all, and I ended up with two or three copies of the same case, if not four, so the number of adds I ended up with was pretty minimal.

So, what did $2 get me....and grumbling about it now...would I have been better off spending the $2 at a Dollarama on a Surprise hockey bag instead? Well, we shall see, so let's take a look at the first bag today. 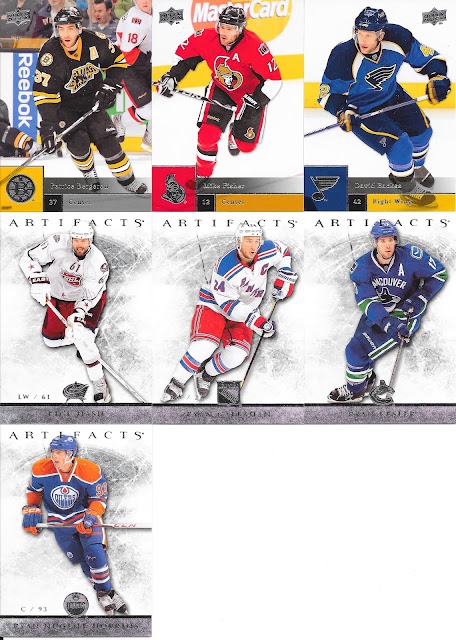 Compared with regular Upper Deck base cards - I just find Artifacts to be a good step ahead in design and quality, but then again, I think it is supposed to be that way.

Best of the bumch...Nash for the uniform I'd say. 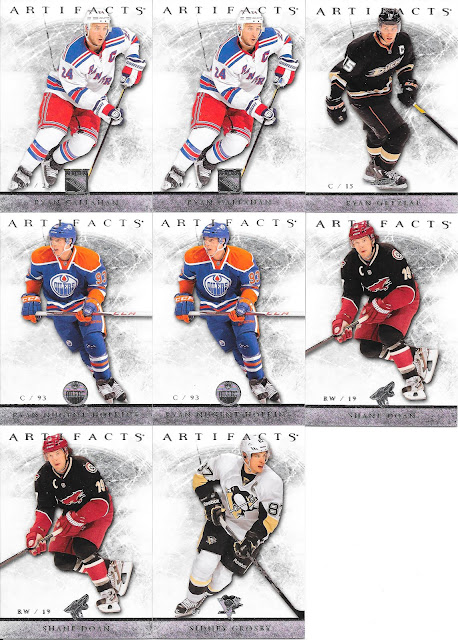 Here are the dupes, which show the problem I mention...three RNH cards being a perfect example. Quality cards still, including Sid The Kid which I happened to already have.

I thought there were a few more cards in the bunch, otherwise may not have picked this one with just 15 cards for the $2.

Ah well, another tomorrow.
Posted by CrazieJoe at 8:00 AM