First items I am going to work through are the few smoky binders. So what I did was take the cards out of the binders, throw the binders and the pages which were in rougher shape, take some paper towel, spray the paper towel with febreeze, let it dry, then put the cards and paper towel in a large sealed rubbermaid bin for about a week.

So how did the cards turn out? Not bad. The smell is either gone or very close to it. The febreeze smell stayed for a day or two, but once it went, I am having a hard time telling if I am smelling a very faint smoky smell, or old cardboard smell, so that's a good sign.

One thing it couldn't fix is that the top row of cards, because the top of the cards are exposed n the binder, all the cards in that row have a bit of colouring on the cards at the top. 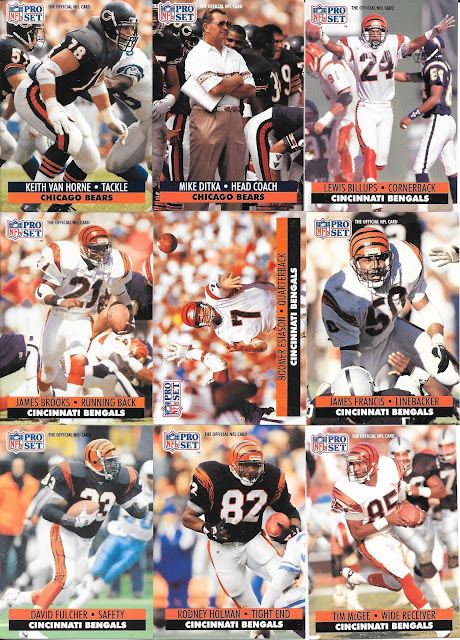 With the 1991 Pro Set football cards, given the full photo fronts, you can't really see any colouring difference from the scans. When you hold the pile and look at the top edge, you can clearly see 3 tinged coloured cards, 6 clean, three tinged off white, 6 good, etc.
As it's football, not going to be keeping any of these anyway, and given the condition, not really going to use them as trade bait, but I do have a home in mind.
Oh, also - nice Mike Ditka and Boomer! 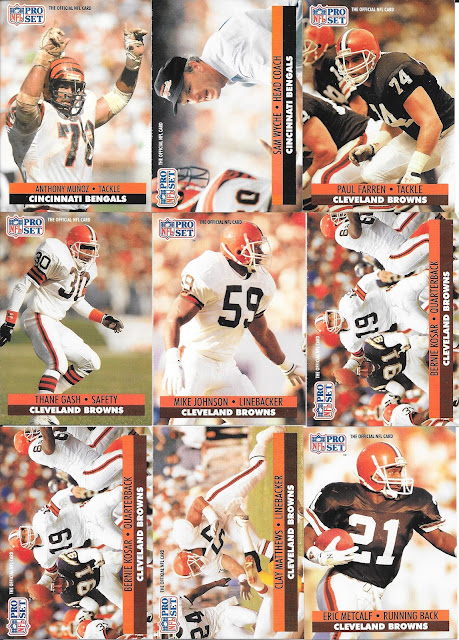 I think the design, though basic, is really great for the front of these cards - between the nice full card photo and team colour design for the name and team, just a really great card. 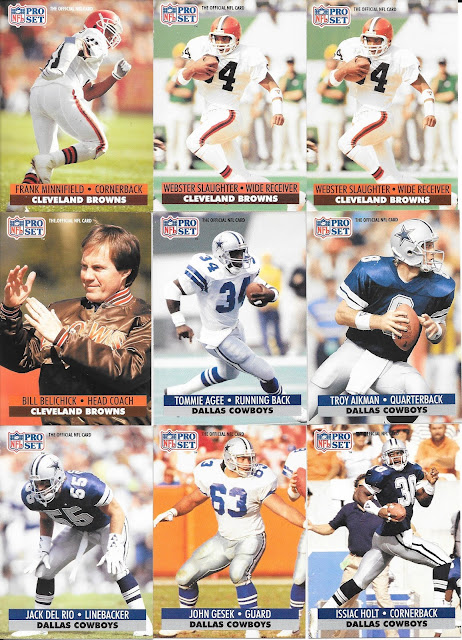 I know Belichick had been coaching a while, though of course everyone will remember him for his time in New England, but the man started with 4 seasons with the Browns.
Also definitely know AIkman. 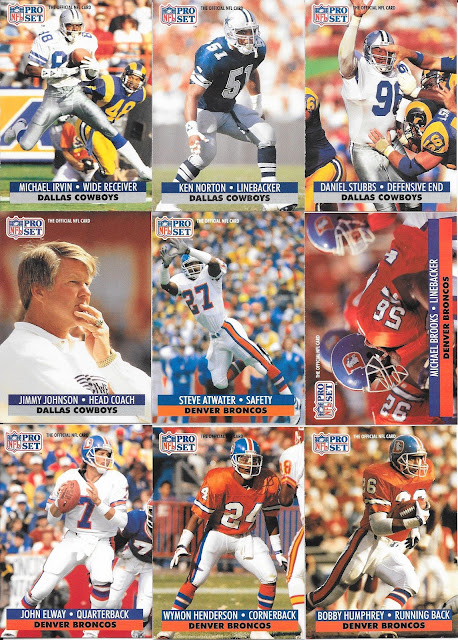 Dallas was a big enough team in the early 90s - I do remember Jimmy Johnson coaching back then.
John Elway, who had one of the best ends to a career later in the decade. 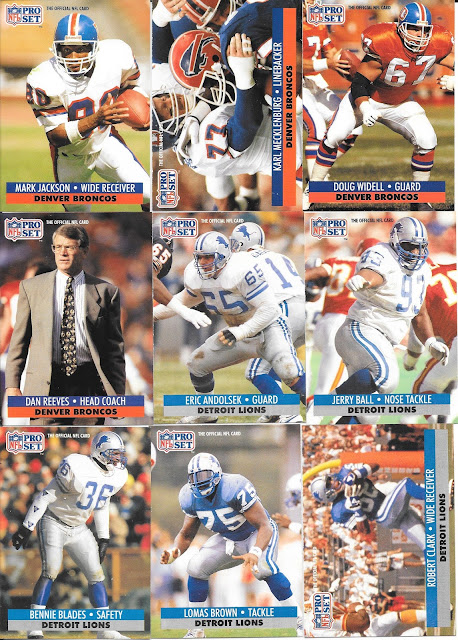 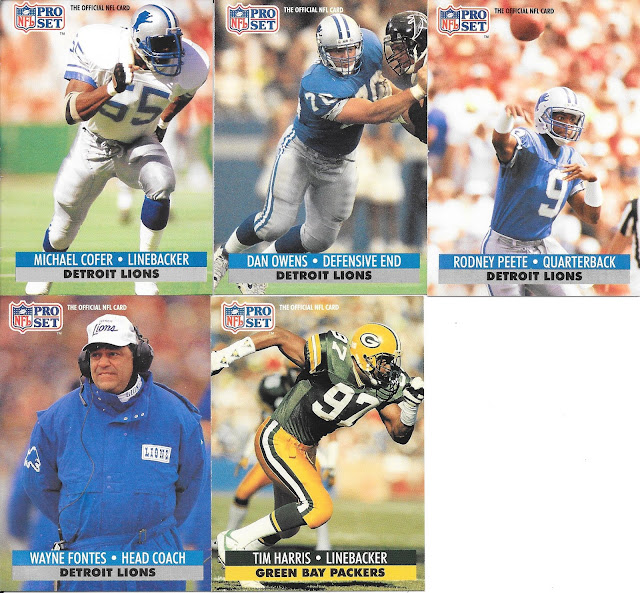 So just to point out, this is a straight "chunk" - cards 107-154 from the set. I'm going to have to keep these aside in order, just to see if we end up with a full set. I doubt it, as  am sure a few cards were not in the binder, though I don't know if they were elsewhere or just pulled to someone else's collection before they got to me.

I am guessing there may be more tomorrow...

If you are still reading, then we have some bonus content for you. in addition to the above big pile, I recently was able to complete a box for box trade - 800 count boxes, so about 700 cards going each way - with TCDB user seppola10, who is a fellow Canadian, who is out in Alberta.
The trade is quite varying in what I received, and with the other sorting and such going on, it's easiest to tackle in small pieces, which includes sharing here in pieces, becuase there is some cool stuff to share. On that note, one of the "set helpers" I received was a good chunk of the 72 card 1998 Comic Images WWF Superstarz set.
By good start, I mean 48 of the 72 cards - which puts me up to 64 cards now and I just have to track down the last ones, but first, let's take a look at the set, or at least what I picked up in the trade. 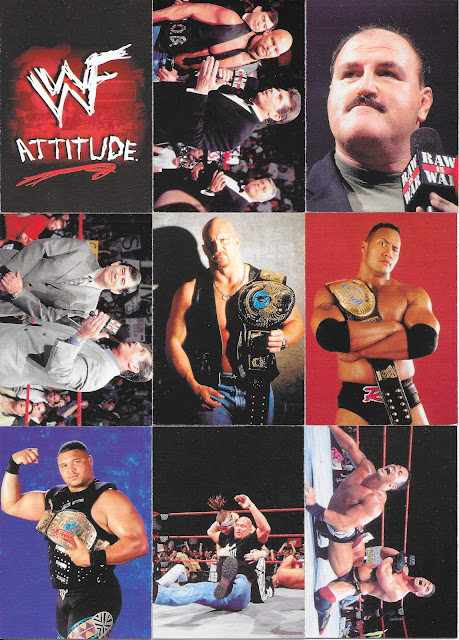 A lot of amazing wrestlers and good memories from the attitude era. Classic Stone Cold and Rock poses. D'Lo Brown who was the original bobble head. 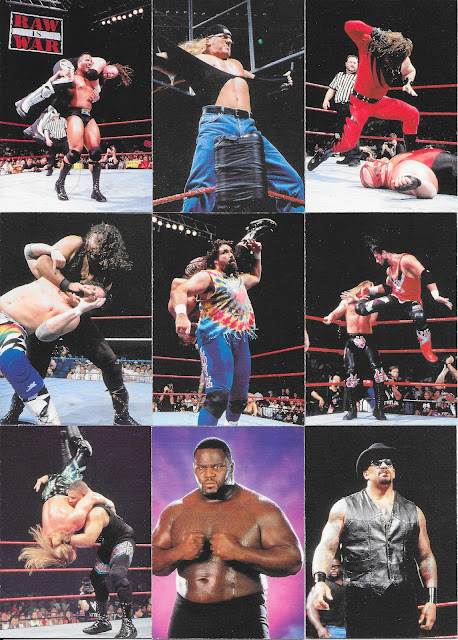 The full action shot fronts are great, though some could use a bit better cropping. Mark Henry looks so young - such a baby back then when he first got into wrestling. 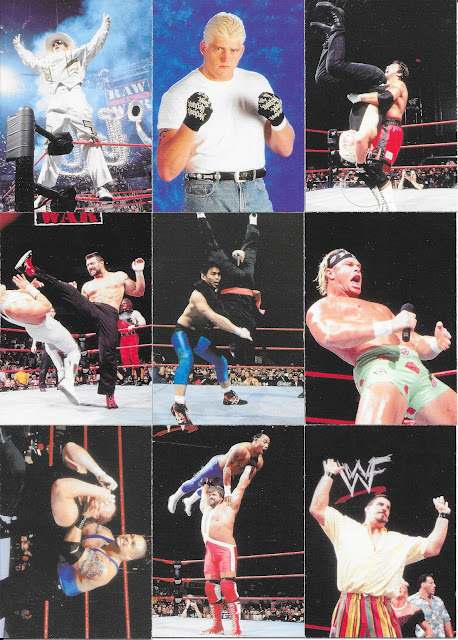 Hard to even recognize Dustin Runnels without the paint. 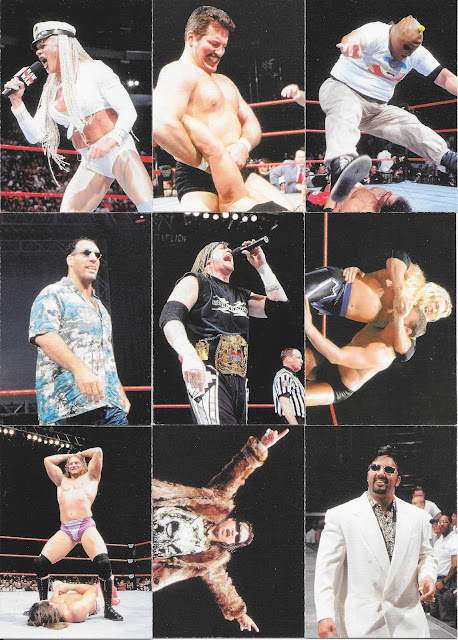 This set also has a number of short lived gimmicks and wrestlers like Golga (top right0. At least they have documented proof of existence in cardboard form! 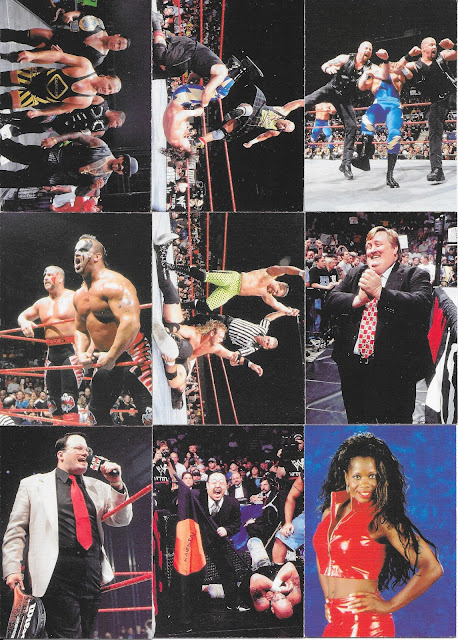 The recent run of the hurt business is just a pale comparison to the Nation of Domination. That was a great stable. 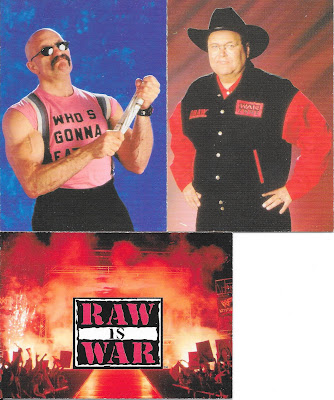 Raw Is War indeed!
Posted by CrazieJoe at 8:00 AM