So I found something unexpected in the lot of cards (I have cut out the last name as explained below): 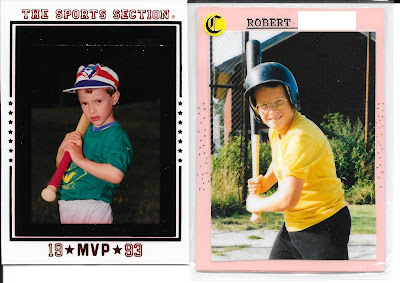 These were obviously home made cards for a couple kids in little league. The backs had a small type up and stats, but also had a home city. I won't get into specifics, but it's not far from here, so I figure - why not try to touch base with the people pictured if I could find them, in case they wanted to cards.
I really have no interest in keeping such made cards, especially when you don't know the circumstances in them being "given away".
So, I did a little sleuthing based on the names on the cards, location, and found Robert who had a cousin with a name which was on the other card (thank you facebook, and other social media sites for making such work fairly easy). I was able to then tie the facebook profile to a business website and get a contact e-mail for Rob's work, and sent him a message - knowing how odd it probably sounded, and giving him my contact info so he could reach out to ensure it is legit, but I also sent him pics of the cards as well so he could confirm if it was him).
A couple days later, I heard back from Rob (my message had gone to his junk mail - not a surprise there really), and it was him, and he confirmed the other pic was his cousin.
Apparently, the two cards were ones that his father had. Rob's father passed away in November 2019, and the card collection as a whole was sold to a friend (I think what I have is in part, that collection and others, but I think it made a couple "hops" since being sold that first time). I had offered to mail the cards to Rob if he wanted them back, to which he whole heartedly asked I do and that he would surprise his cousin with his card as well.
Rob also asked if I find anything else like that, just to let him know as he would greatly appreciate such items - which is not a problem on my end.
Awesome to be able to return the cards, and glad I reached out because they obviously did mean something to Rob and are a good memory for him (it was his first year in little league and his dad was his coach that year as well).
With those couple cards taken care of, let's look at some others which were odds and loose with some over the oversized cards. Not sure exactly why these ones ended up here, but let's see what we got.

"Base" keepers. Not sure what I have really considered the One on One card game cards before, but they are a bit oddball type to me so I keep the few I have picked up. Still not sure about it, but one baseball 1995 Score set slow build need with Piazza as well. 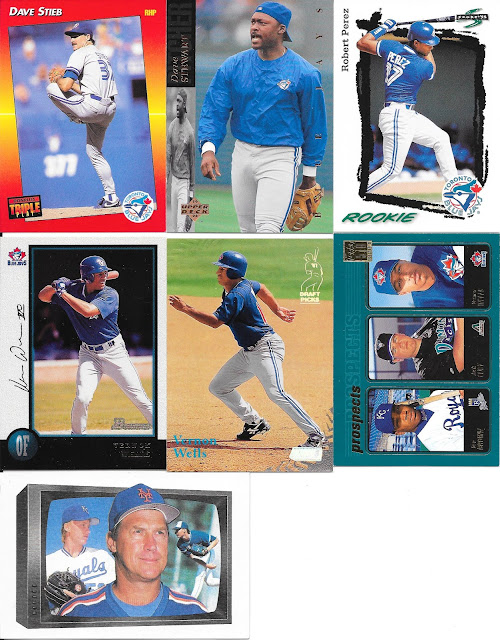 Some solid Jays contents including a few Vernon Wells cards. I needed a few of these, or at least they were new cards to my collection, like the Mel Bowman and the Wells Stadium Club. Either way, a great start and it looks like baseball will be well ahead from that of the Santa Lot I got a few years ago. 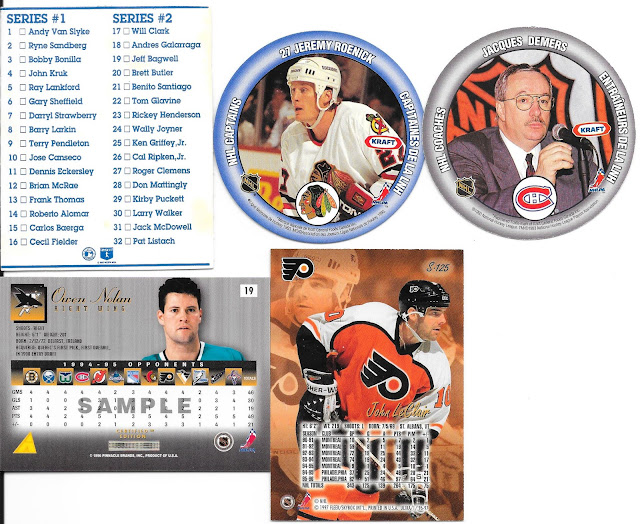 So we have a Hostess baseball checklist cut out - a couple Kraft Peanut Butter Discs, and a couple mid-90s Sample cards (which is why I am showing the backs on those). I hope these sample card things keep up as I love them. They may not be overly special, but getting something you can't just get in a pack for a set is really cool.
As for the rest... 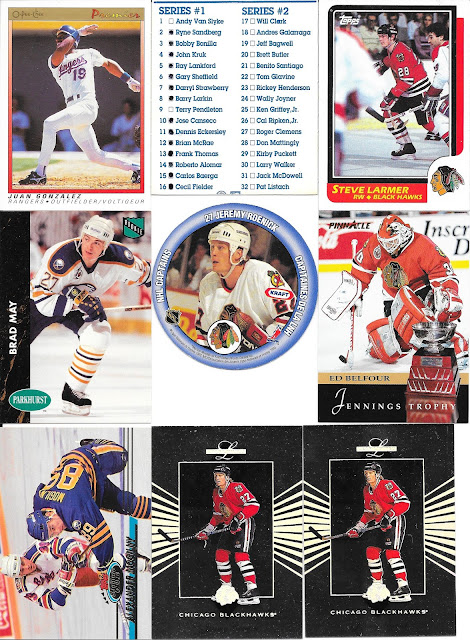 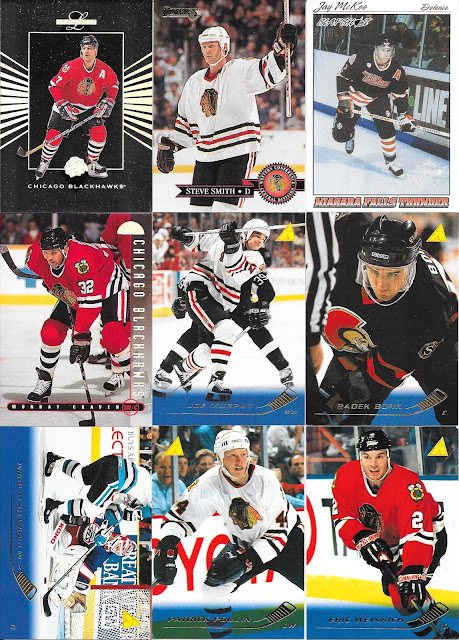 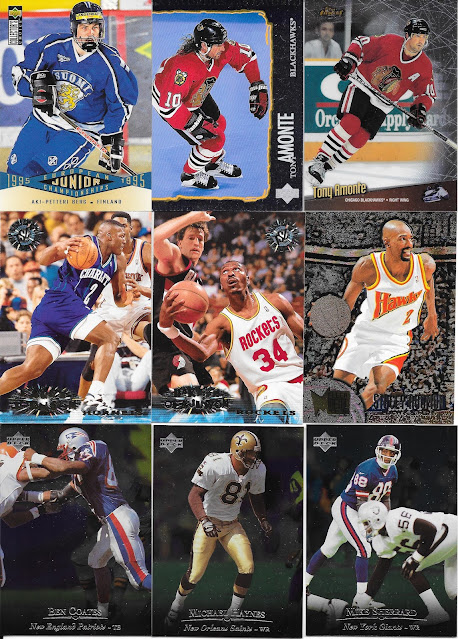 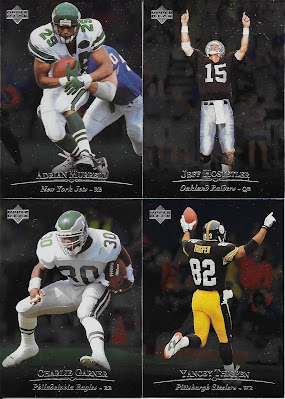 Nice to see a mid-80s card already. I assume I won't see much from anything earlier than 1989 in the boxes, but that's fine if I get lots of 1995-2005 since there is plenty missing there for me anyway,
Also, where I know these cards will get interest... 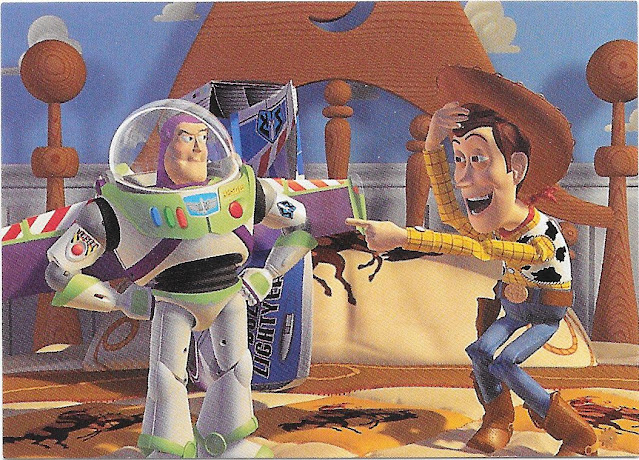 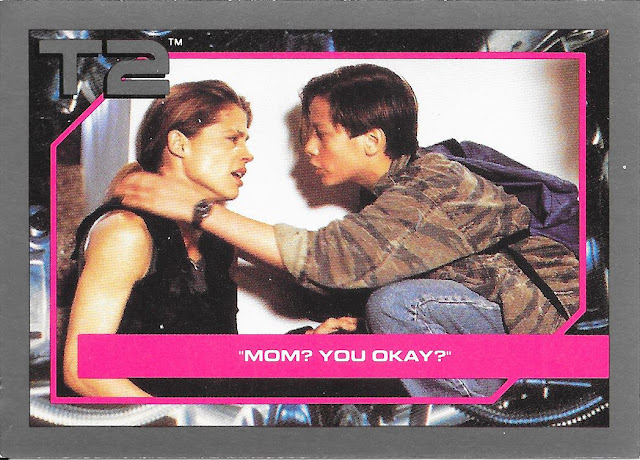 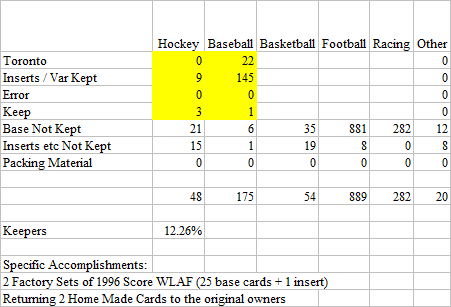