I still think Montreal hates him

Shawn Michaels had quite the career in front of, and behind the scenes. Obviously we don't know first hand what he was like, but even Shawn himself admits he was problematic to deal with during the 90s. Don't quote me, but I believe he credits the big change in his life to when he found religion, but regardless, the man came back after a number of years due to a thought to be career ending back injury, only to have a good enough career post-injury that, if they treated them as two separate careers, both would be Hall of Fame worthy.

With the DX entry to the Hall, I guess that does give him 2 HOF entries anyway. 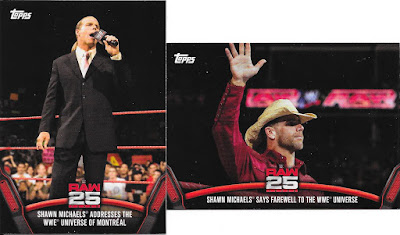 These inserts discuss the infamous Montreal Screwjob and then Shawn's farewell. Both solid moments for his career (not necessarily good, but memorable). I do think Montreal still hates him and favour Bret Hart. One of the other cards in this insert set is the bury the hatchet moment between Bret and Shawn that happened in 2010 as well - just shows how intertwined the two were with Raw. 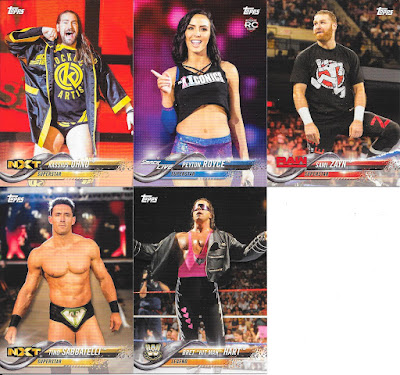 Ha ha - only appropriate for Bret to show up with Shawn in the same pack.

Today, also have a surprise package to share as PapaG321 was nice enough to send a few cards along as a pay it forward... 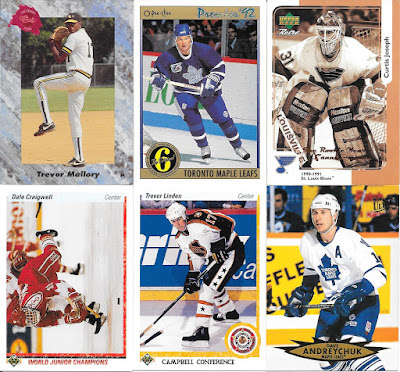 A bit of everything, Leafs, sets I am working on and a McD insert too - can't ask for much more in a surprise than that!
Posted by CrazieJoe at 8:00 AM