Not done with just Dunn

First, a quick note and goodbye to Carrie Fisher. Each year it seems that many talented starsare taken from us, and 2016 is feelimg the same, punctuated by George Michael and Carrie. Just tragic, but a thank you for all that they gave us in their lives.

With that said, to more selfish, but positive things, today is one of those days that the Santa Lot just hits a home run - a number of goodies today that I can't wait to share. 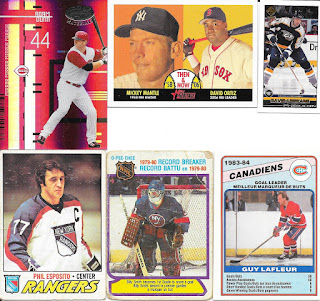 The Adam Dunn card is serial numbered out of 100 and dang if it didn't scan nicely to show the red metallic shine. Next to that we have a 2007 Heritage Then & Now insert card which includes David Ortiz who just retired this past year, and Mickey freakin' Mantle. Add to that another Pacific 2001-2002 insert card and that would have made a great day.

Then, since there were no real inserts in the early 80s and prior, I include the "special" base cards such as the record breaker and leader cards.

So why the Esposito card? Uncorrected error as one of the goal lines incorrectly note 78 goals instead of 55, but I guess Phil was scoring enough, I can understand the error. 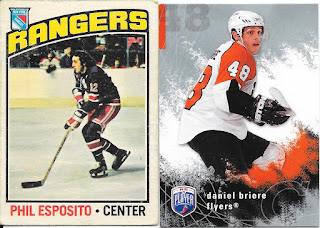 As if one Phil wasn't enough, we get a second. I doubt there will be many more old (read as being pre-1988) hockey cards, so nice to get these. 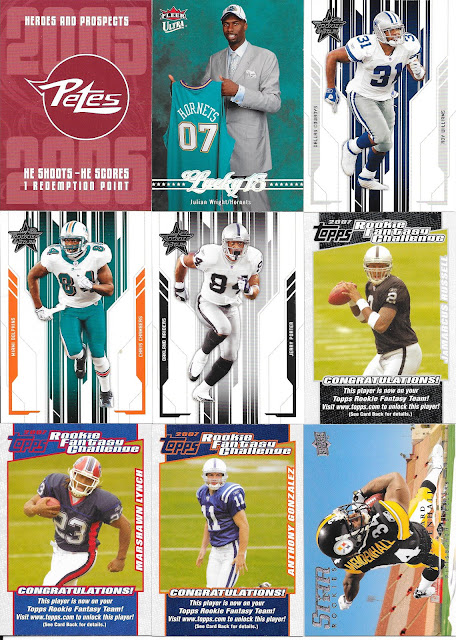 Even these deserve a wow given the Rookie Fantasy Team insert cards which include Beastmode. Factor in the rest of the rookie cards, including one of the awesome yet hilarious shots with Dorsey (was he jump posing for this - the eyes give away great concentration in this one..).

Awesome all around 20 today - hope this holds for the rest of the year...what, only a few days left....dang.