Though baseball card day came and went and due to family stuff, I couldn't get to a card store, that doesn't mean I have a shortage of cards to discuss. This will be a longer post because I got such an awesome trade package from TCDB member bkim (also check out his webiste at http://robertkimble.us/). We had worked out a trade of about 15-20 cards going each way, but then he was amazing in sending across almost another 100 Blue Jays cards. I always end up feeling two things - thankful for such great members of the online collecting community, and a bit inadequate as I feel the need to send something more back...just have to scrounge through his want lists to see if there is anything more I can help out with at all. Actually, this is exactly why I am glad I can compare my collection list to wants on TCDB because in this case, I have no problem sending over some Phillies in sets I have a few cards I have been "keeping: but really at this point have no intention of completing the set for.

So, the original trade was for these cards: 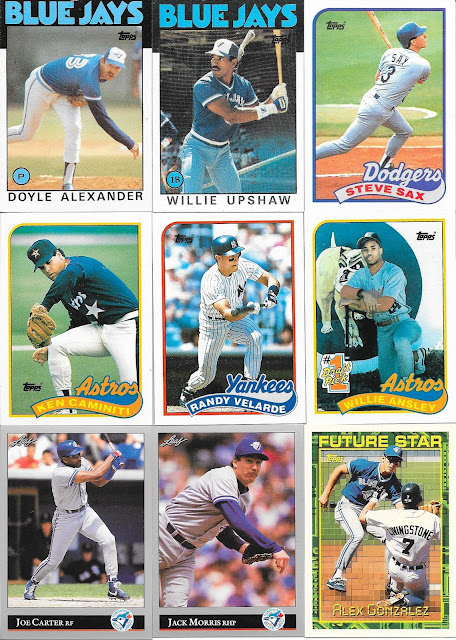 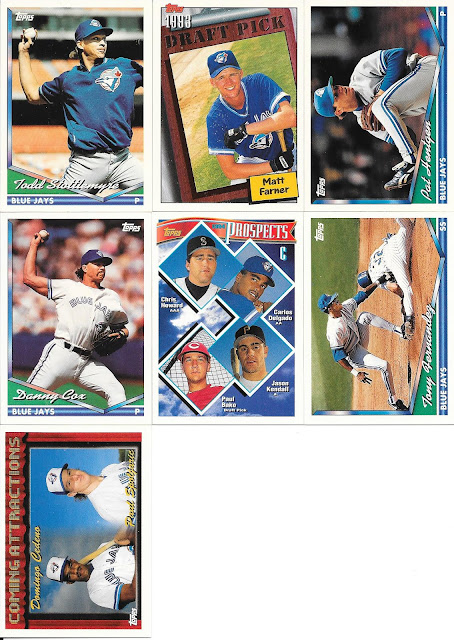 The main pull for the trade was I believe I have the base set for 1989 Topps now completed. I just have to pull it out and count through to make sure there hasn't been any funny business. I believe this is the largest set I have completed - it was the yellow ugly 1991 Fleer 720 cards before this one.

The rest of the cards were Jays needs (and copies of error cards for 1989 Topps as well I believe).

As for what else was sent my way... 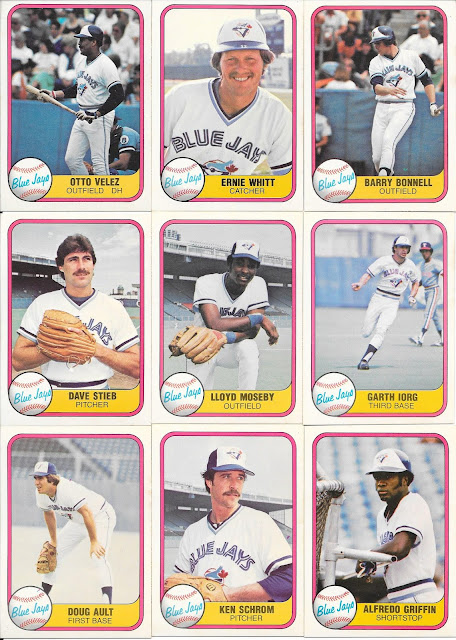 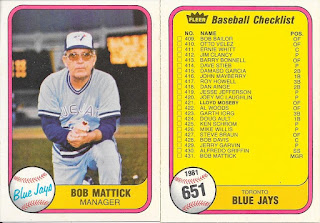 This is the earliest of the cards - 1981 Fleer, which brought the needs for the Jays set down to just a couple. Young Dave Stieb alert! 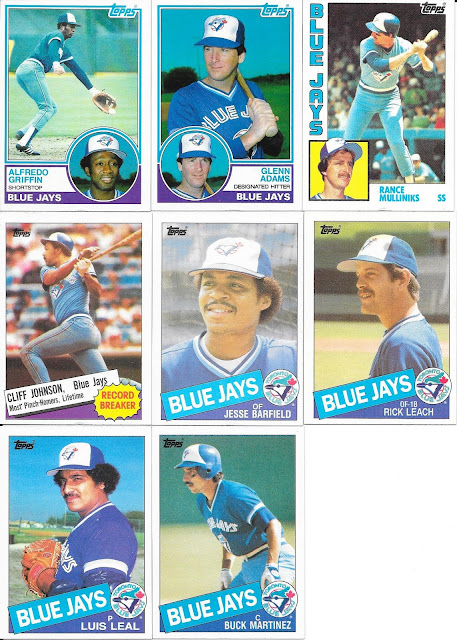 A few more mid-80s Jays which further a few more team sets. I didn't really follow the first few years of the Jays (I was too young, it was late 80s that I start to really remember watching and following) so I missed the highlight years of Cliff Johnson being a big part of the Jays. 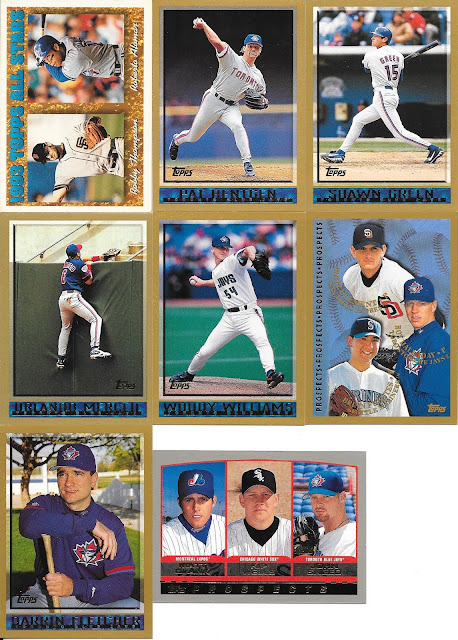 Here are the 90s through 2000 additions. I was never a big fan of the late 90s/2000 logo and uniforms. I am proud they push the "Canadian Team" part, but the large maple leaf in the logo is too distracting and overpowering. 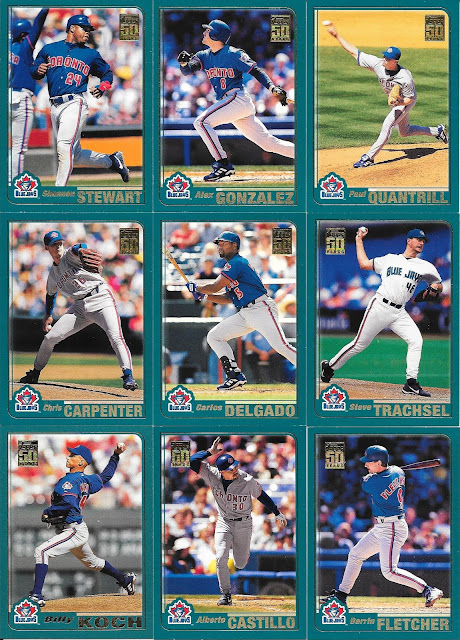 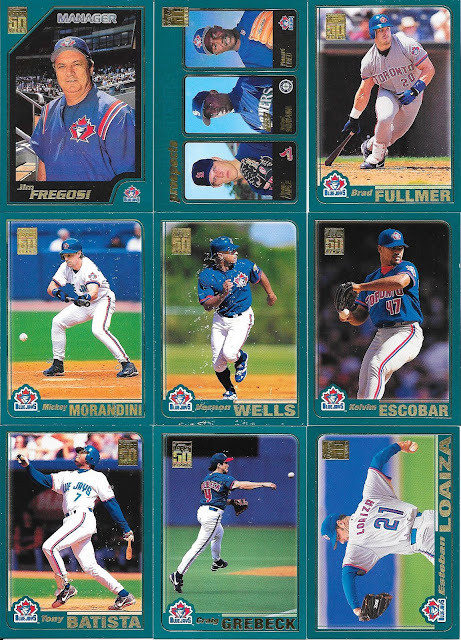 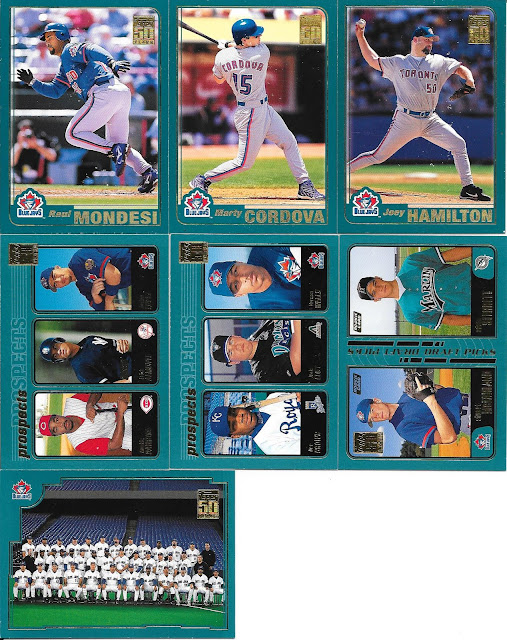 So I went from having one of the base cards to only missing a couple. As much as I am not a fan of the base border colour, thrilled to have these and I do like the triple photo look for having multiple players included on a card, oh and the team photo cards as well. 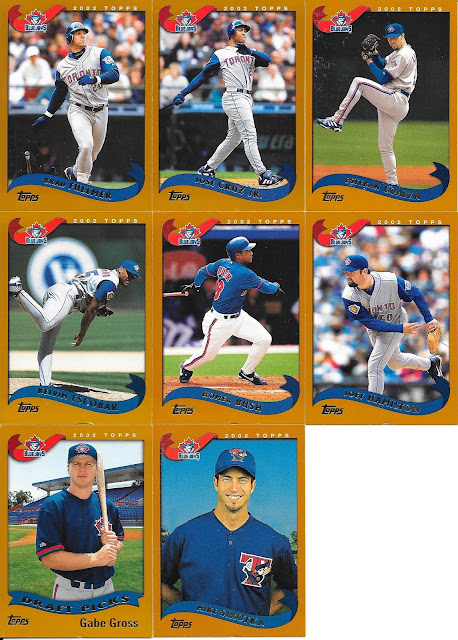 Okay, I found a border colour worse than the 2001 Topps. These also highlight another logo for Toronto I wasn't thrilled with - the big T. 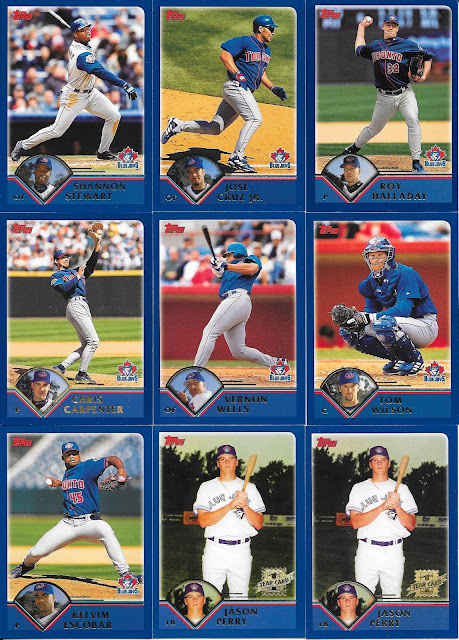 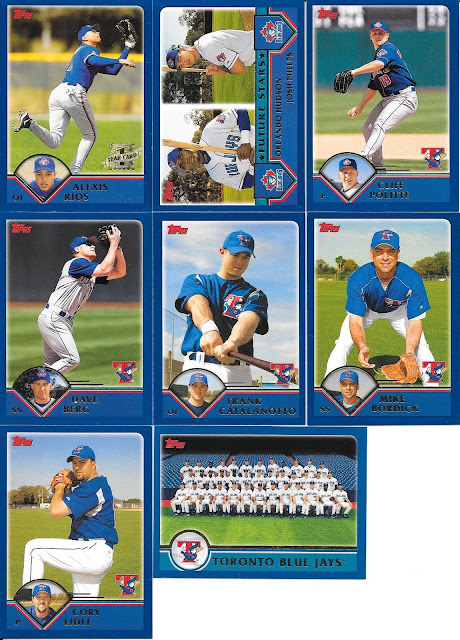 Much better design here - and yes, because I am partial to the use of blue. I also like the extra photo and baseball diamond framing of it. 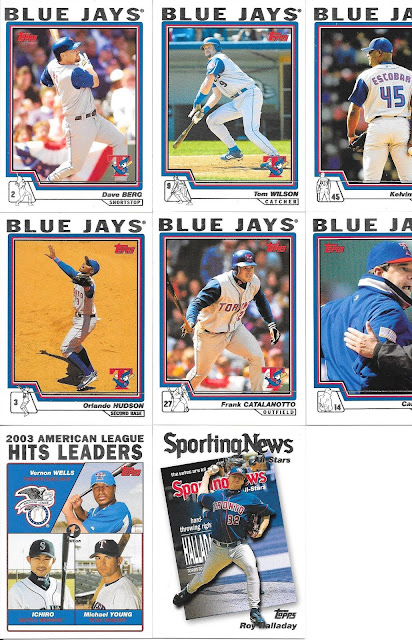 Didn't notice my scanning issue until posting - obviously the cards were fine...just not scanned well here. I love the odd pose of the Hudson card...will he catch it or lose it in the sun? 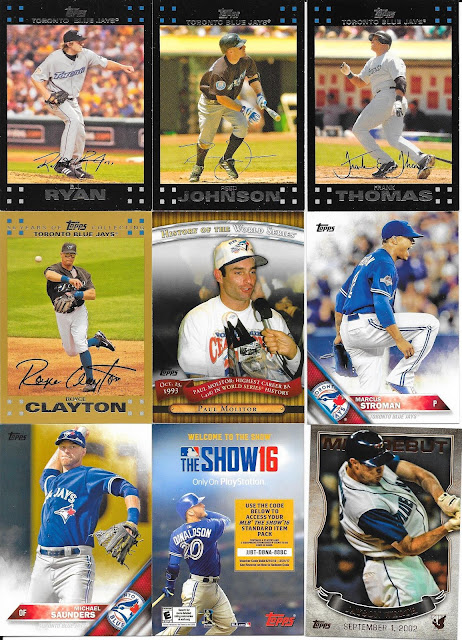 The 2007 Topps are Red Back parallels, and with the Gold parallel, awesome adds for the set. All in, what may be my favourite card of the extras is the Molitor. Not the prettiest for colours, but I really enjoy it regardless for a great player, a great moment highlighted.

Many thanks to bkim, and I am going to have to take a look at sending over a few more things if I have anything further that you collect.

As much fun as going through that was, Yes, the time has finally come to open one of these: 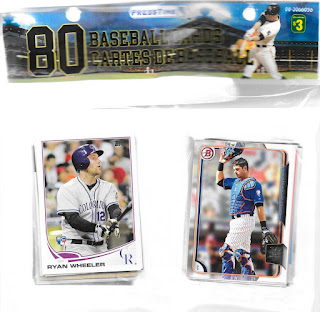 I mentioned before seeing these at Dollarama recently. Since the trip when I picked this up, I have been to a few different stores and only seen them a couple times. I presume these are a new "regular" item, but are popular and people are buying, but we will see. If I see more, I will probably pick them up since the price point is pretty good, but let's see exactly how decent these are by cracking one open.

First a run through of my different collection adds...

80 cards and I picked up 4 Blue Jay cards, the newest one of which was a new add for my collection. 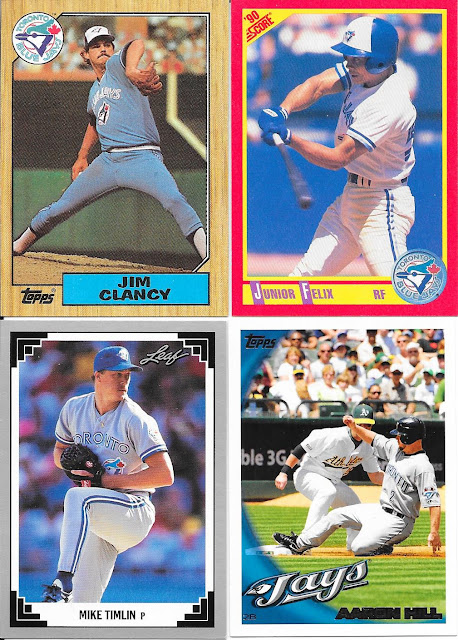 This is a decent representation of the pack - not unexpectedly, a number of "junk wax" cards - not that I am complaining, but also some newer and some older. Ok, we don't see the older here, but I will get to that. 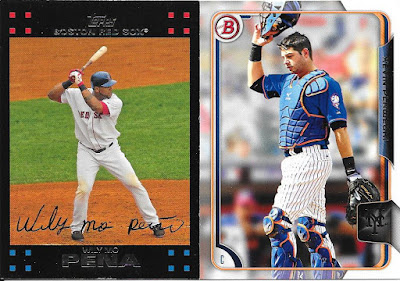 Was able to pull one parallel and one insert in the pack. The 2007 Topps is a red back parallel - so I can see how that would be missed if they were skimming cards out before packing these. That, or they realized how it doesn't matter much as a special parallel. As for the Bowman - what isn't an insert in Bowman these days. That said, this is one of the Prospect cards. 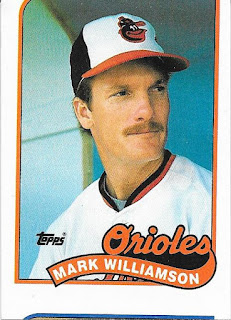 Yay! Always nice to pick up a misprint or error card out of these things. Not quite enough to see who is trying to sneak onto Mark's card, but can't quite get enough of it on the front or on the back.

As for the rest of the cards, here is a sampling of what else is there - the oldest and the newest cards... 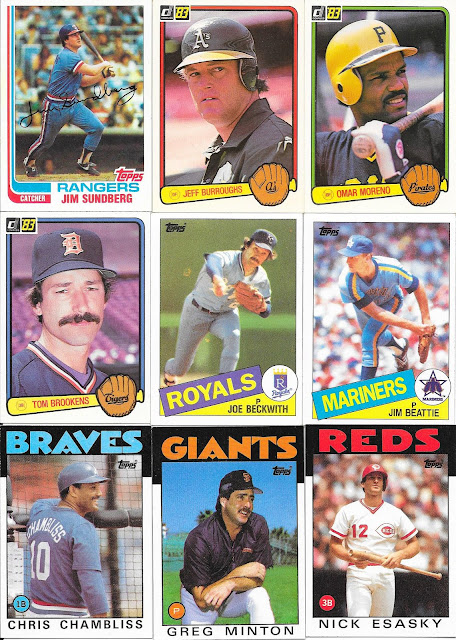 I was happy to see some 82-86 cards come out of these. I don't have too many cards pre-1985 so these are always a great add. Also like the simplicity of the '83 design. 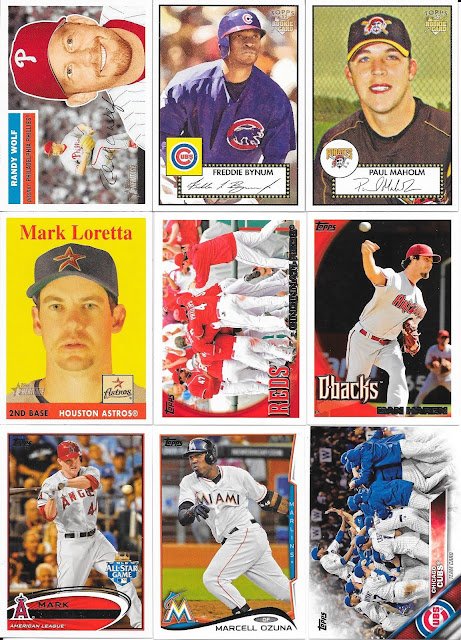 Here are the mid 00s and up cards. I like that there were some Heritage (as well as early 00s Fleer Tradition). I do not have many, and enjoy the blast from the past with most of the designs. I was a bit surprised to see a 2016 Topps base card, and being that Cubs team that seemed to do alright as well.

Overall - I am very glad I picked up about 5 more of these because that was fun to go through and out of 80 cards about 60 were new to me, so I will take it. Even the dupes were generally good and I will likely get rid of easily.