Never too late for Spring Fever or More NABC cards

Before we talk about Mike on a different point, I wanted to go over the rest of what he was nice enough to send across in the boxes this week.

First, a few left overs of odd cards I don't have...

1990 Topps Expos. Mike collects Expos, so I expect these are dupes he doesn't need. 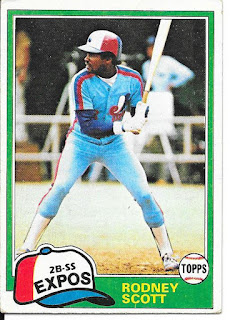 Another Topps Expo, but early 80s instead. 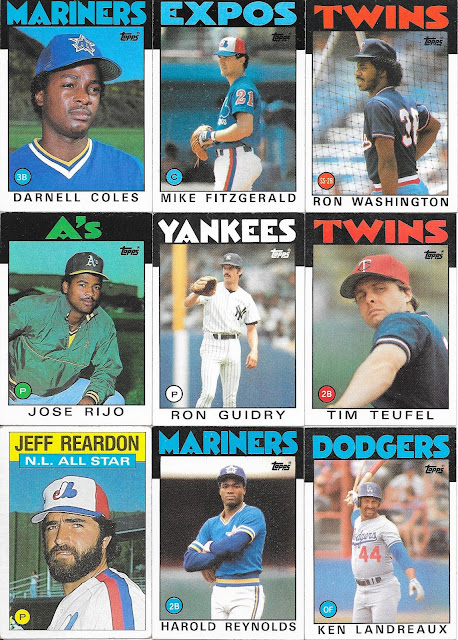 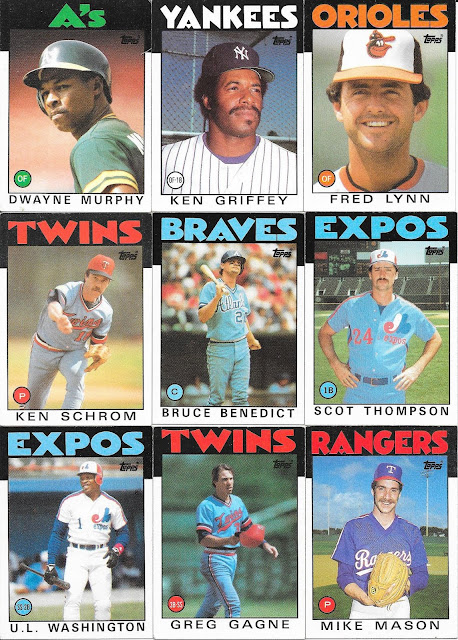 Again, just a sampling of the '86 cards that came my way, but Mike added a nice chunk which gets my set to about 40% complete. No where near complete, but the design, as ugly as it can be, has grown on me. 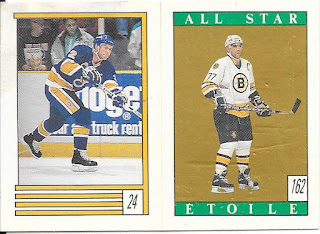 Well - this seems a bit out of place, but 80s O Pee Chee stickers work for me!

Now welcome to the Toronto portion of the box...

Awesome Esso mini cards, and that they are Leafs I didn't have at all. Not sure how prevalent these cards are (not going to go looking for them on ebay or anything like that yet), but I may just need to look at finishing this little set off. 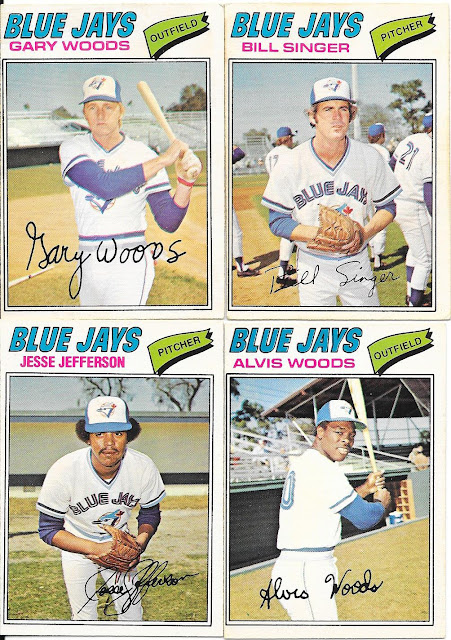 Early O Pee Chee Jays. Probably because I wasn't collecting at the time, and many trading partners are in the US, I still have many O Pee Chee holes in my collection, but now at least I have a few less! 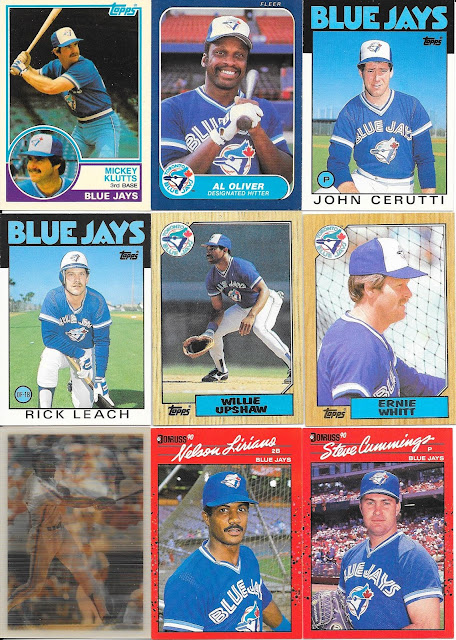 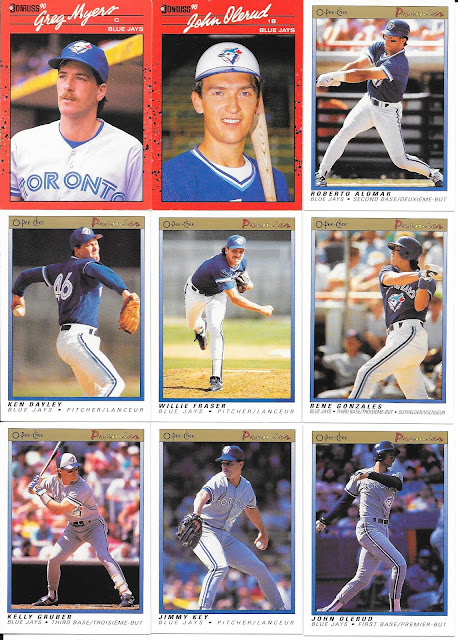 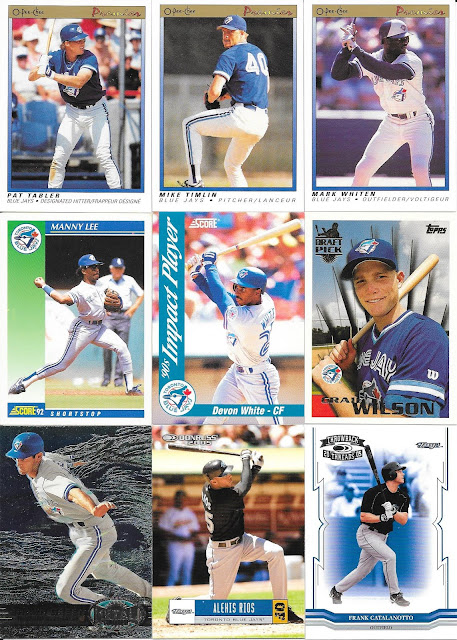 Awesome Jays all around. I like the "junk wax" cards no matter how over produced they were. That said, I only "needed" a couple - though if I finish any of the sets, the dupes are awesome that way (and I'll keep all Jays dupes anyway for the collection).

Devon White Impact Player - not sure I ever thought of him as such, though he was a great leadoff or number 2 hitter.

My fave, for all the wrong reasons is the Metal card. Can you even tell who it is? I am trying to tell from the scan if he is in some kind of whirlpool waves or tornado winds the way the background scanned. Though to be honest, in hand, it looks just about the same. Oh, and by the way, it is Shawn Green. 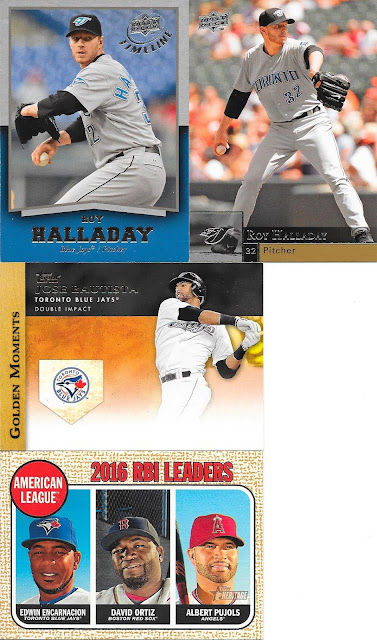 Wasn't expecting to see a 2017 Heritage card per se, let alone an RBI leader card. The retro design is awesome of course, especially the nice clean design for the three photo set up. Add in the Jose insert and the Halladay Timeline card which looks really good with the deep blue on the design, and I can't be any happier with these.

Huge thanks again Mike. I think I already have a few other cards aside which I'll send off in a PWE in the next few days.

Speaking of Mike, I have seen a new repack box at Walmart the last couple months, and have debated picking it up - 10 packs for $17 CDN. It wasn't until I saw a breakdown of the packs on Mike's blog Not Another Baseball Card Blog that I figured there would be a few things I will likely get that I need for the unopened pack collection.

So in case you are wondering - here is what the box looks like when flattened and scanned... 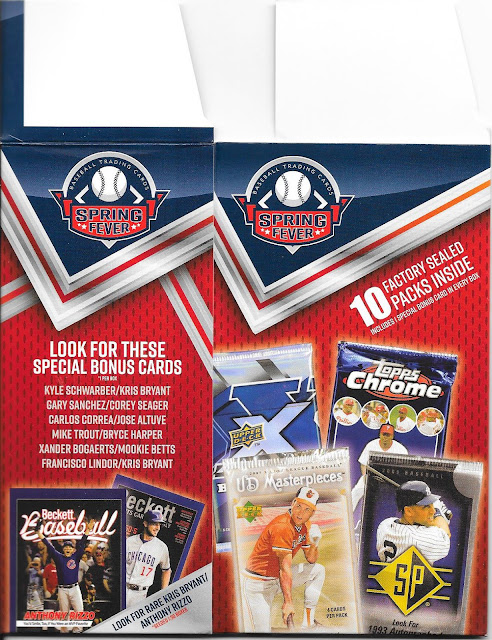 So, there are 10 packs as mentioned and one of the various promotional cards. 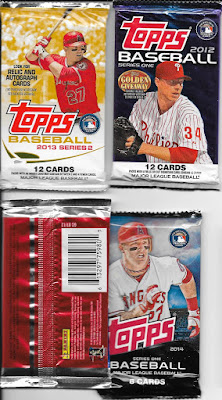 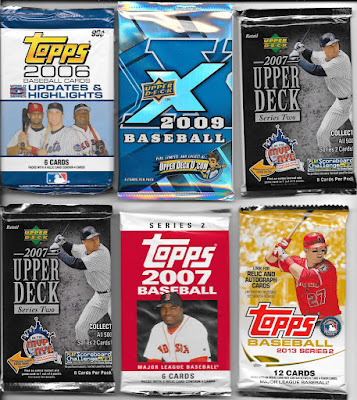 Yes, I know, one of the packs is face down, well that is for two reasons. First, even though these were in a box, obviously at least the 2014 Topps and the face down pack must have been glue to a piece of cardboard before in another repack box presentation, because they both were very sticky and I didn't want them messing up the glass on my scanner, so I did this. Second - it's Triple Play so no need to see the pack anyway.

So, now the question of what do I have and what do I need for my unopened pack collection...
2012 Triple Play - got it

2013 Topps Series 2 (12 cards) - got....wait....no...NEED IT because the other pack I have with same cards is the Target (I believe) pack with the wording about red parallels banner across the top - yes I am sadly that differentiating in these....so one keeper and one to open later.

2009 Upper Deck X....never heard of this and have none of the cards so NEED IT

As for the promotional card... 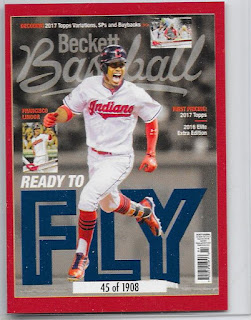 A Cubs win photo on the other side, interesting card and numbered so I will end up keeping it, but a promotional card nonetheless.

Overall, alright since I was able to get 5 unopened packs for the collection which isn't bad. Nice to have a few different packs for opening as well.  Since Triple Play doesn't count for much, let's just open that pack now as well to get it out of the way... 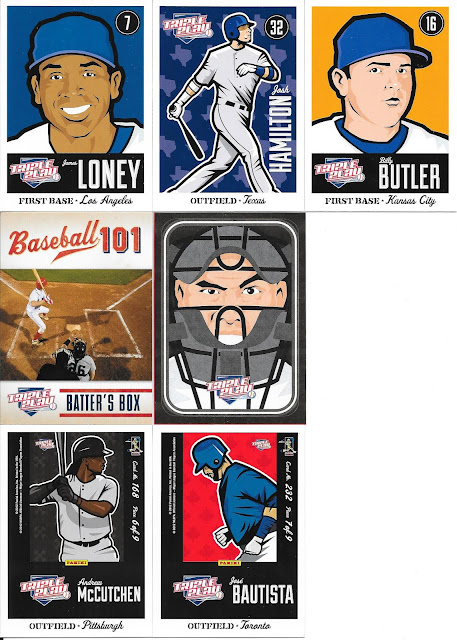 Works out alright getting the Bautista card, but nothing else too interesting otherwise which is to be expected I guess...