Keepin' it blue and Upper Deck too

Obviously with the news yesterday, before I get to my post as planned, I want to take a couple moments to share in my memories of Roy Halladay. Tragic to have lost his life at a mere 40 from a plane crash yesterday.

Roy had many great seasons with Toronto, and as sad as it was to see him go to Philly, why, I could understand. A sure first ballot Hall of Famer in my very biased opinion, he had a great career, and from all accounts, was an all around great guy too. He will be missed.

With that sad news discussed, let me go to Thanksgiving baseball cards....Upper Deck time...circa 1990...not a ton of cards that survived given the condition - maybe about 60, but still some needs filled.

OK, so I didn't need these (or the 4 Olerud rookies, three more just like the one above), but still nice.

My favourite of the bunch. I like the 9 card Reggie insert set, and getting these three moves me up to 7 of the 9. One of these days, I will look for the last couple just to cover this one off. 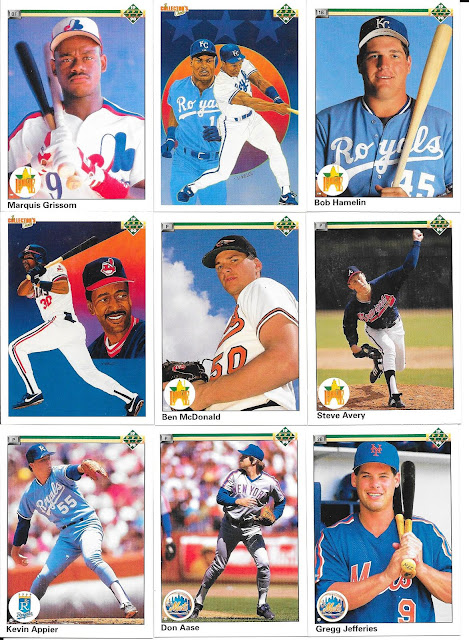 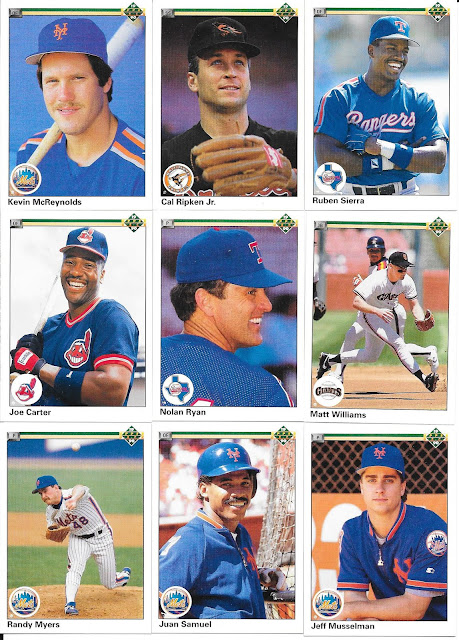 So, a heavy Mets influence obviously, but also nice to get some of the stats of the set out of the way such as Bo, Cal, Matt, Joe and Nolan.

Not bad for free cards....added about 40 dupes of good enough quality too.

Another nice pick up which I don't have a pic for just yet because I can't scan them are a couple 1997-98 Pinnacle Inside unopened cans. Not sure if cans were used in any other hockey card packaging, but these are awesome. I won two on Listia and ended up with a New York Ranger can, and a Pittsburgh Penguin can. Other than Leaf, Penguin would have been my number two hope.

I need to show a pic, so let me just link you to a picture on Tradingcarddb.com. I believe Pinnacle did this for baseball and football too (I need a baseball one!). Just awesome, and brings my total unopened packs products between baseball, hockey and Magic boosters to a few short of 500. Seems like a lot, but really not that much if you consider how many different sets are released these days. 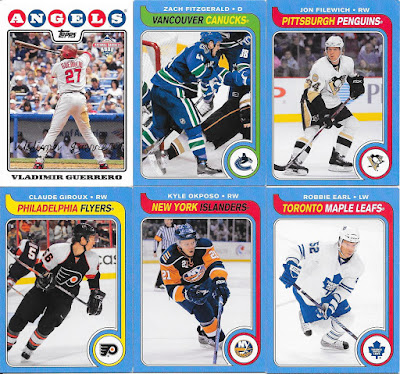 A number more of the 2008-09 Retro parallels, happily including a new Leaf card for me as well. Blue on blue - can't beat that design.

Another 2008 National Baseball Card day card as well, except out of Topps this time instead of Upper Deck. I think I prefer the Upper Deck design instead of Topps which just used it's base design and added the Card Day logo. 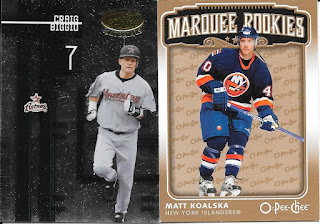 This is the first subset Marquee Rookie from this O Pee Chee set I have picked up. I like the general consistencies with the base set design, a little too much brown/bronze colour in generally for my liking though. 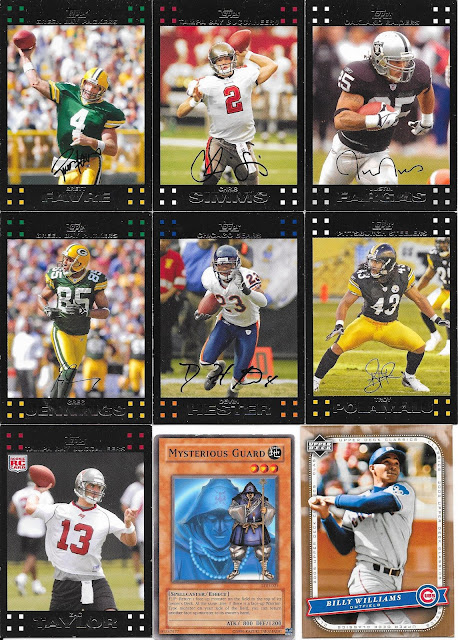 Another YuGiOh card - that makes 3 so far. Keep this up, I may have a deck..or atleast a hand of cards...still not going to play though.  Another one or two new to me 2007 Topps cards. I should take a look soon at the "what's left" to see if completion is somewhat near on the set.