A dilemma of Christmas goodies

I'll get to some Christmas stuffs, but first more dilemma19 goodies! Today, the big item is a bunch of 1992 O Pee Chee Premier baseball cards for the work on that set. I had about 75% of the 200 card set, and this looks to add about half the cards I needed. 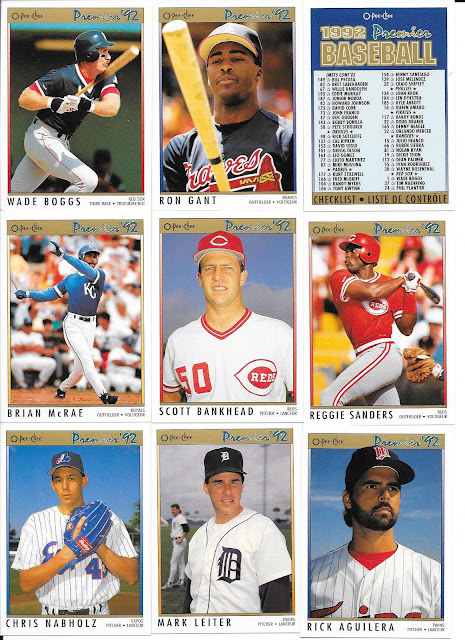 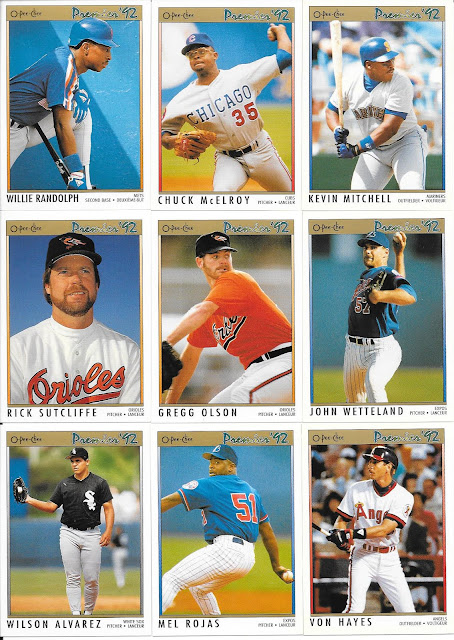 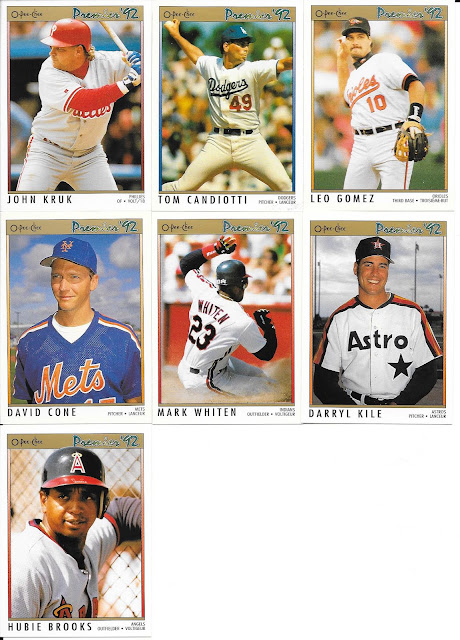 A bunch of great cards here like the nice Wade Boggs, and the memorable McElroy. Also pre-Jays David Cone and Mark Whiten too. A decent little set which is why I have no problem trying to finish it. Although I like the concept of sets including every player on every team during the year, a 1,000 card set is much more difficult (and more ex[pensive) to try and collect to a 200 card set.

There were also these few needs in the same bunch. Jeff Ware did make it to the big club in 1995 and 1996, but didn't have much success with a career ERA over 7, he did get three wins for the Jays.

As I mentioned, I did get two tins of 2017 Maple Leaf Centennial cards - I will open one here today and one tomorrow. As I mentioned, hoping to get a good part of the pure 100 card base set (which is before all the higher numbered short prints in the second half). Each tin came with a topper of a neat little pennant which is about 3 cards in lenth and size. Here are the two from the tin today and tomorrow since I pulled them out when I unwrapped the tins: 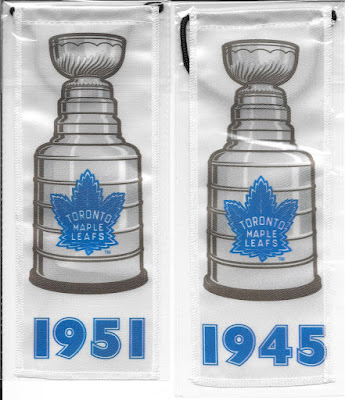 It would be nice if I could find one from 2000 or more recent, but alas no luck.

So, each tin has 12 packs with 8 cards each...fingers crossed for a good base set representation here.... 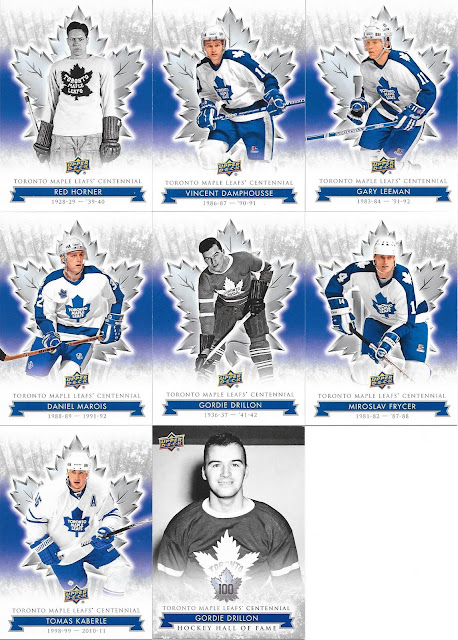 Can't really complain about the base design - lot's of blue, prominent Maple Leaf, decent photos, though no real sense of play given the designed background. Overall, they do look really nice together.

In this pack, all base including one short print (yeah - 200 card set and the second half is all short printed for what that is worth). 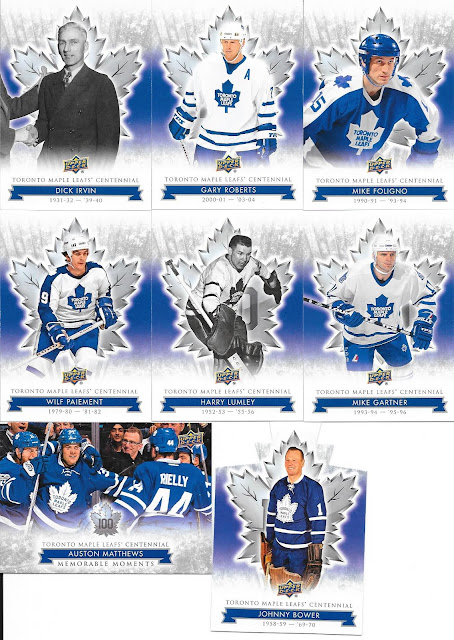 I am not a Matthews chaser per se - not a player collector as I have mentioned, but nice getting this base card of his (again, this is the short print - one per pack). Also in this pack is the first die cut which is the last card, Bower. These are decent as it is a simple rough cut around the Leaf in the top corners. 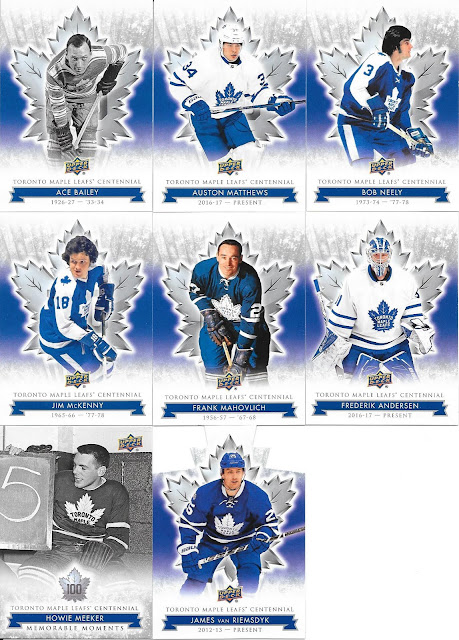 A second Auston base card and a James Van die cut. These die cut fall one in every two of these tin packs, so I should end up with about a dozen of these when all is said and done. Interesting to see the "Present" in the dates. Makes me almost want all the players to have been retired so the cards would have been "complete". 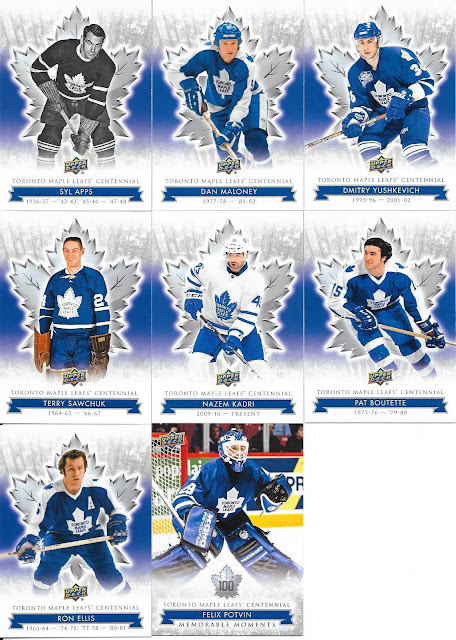 Seeing another full action shot with the Potvin card makes me wonder if this for all the base cards may have been better. It does give reason to chase these short prints I guess if nothing else. 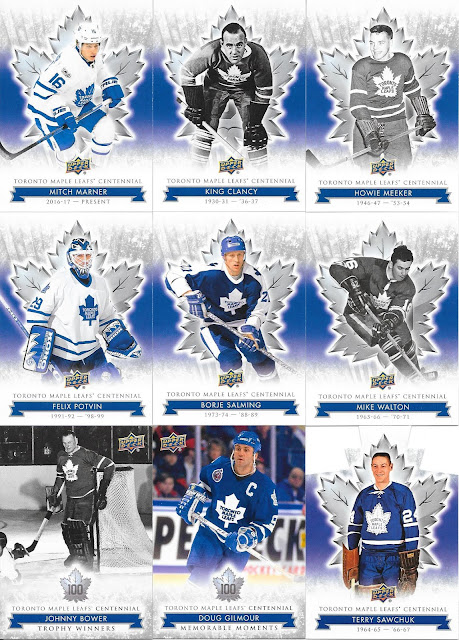 I was wondering why I ended up with two short print cards in the pack, and one was put in upside down. Given there were nine cards in this pack, I presume this is because of a packing error in my favour. Really happy to get the Douggie memorable moment as I remember the game against the North Stars and his 6 assist. 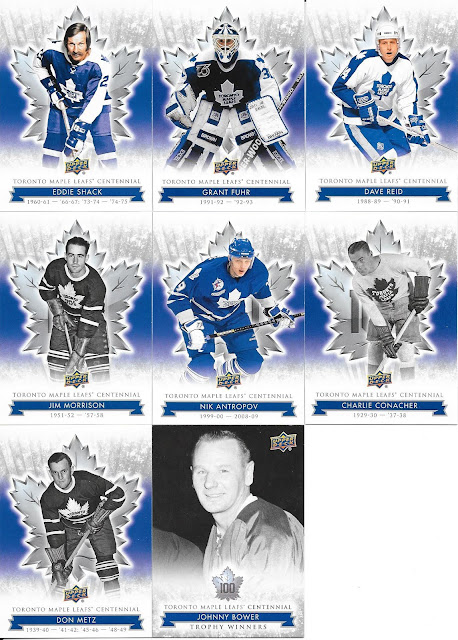 As much as I love the older Leaf cards, it is the ones that relate more to my youth that I connect to more such as the Grant Fuhr. Hard to believe he was only here for such a short period in his long career. 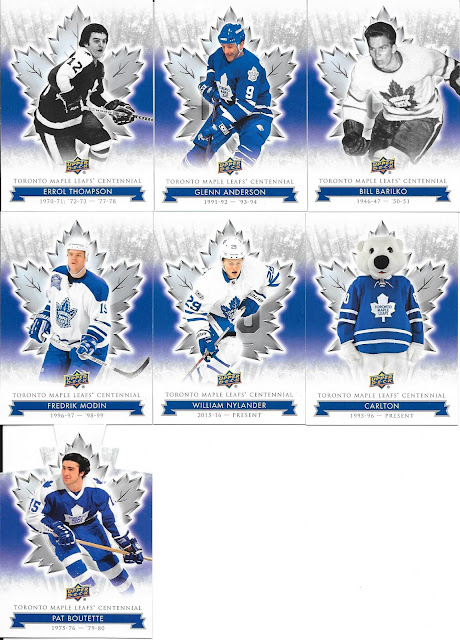 Well, I guess I didn't end up ahead of the game after all. Here we are a card short, which likely explains the card extra in the earlier pack. I didn't know the Leaf mascot, Carlton, had wings because with the Leaf background, that is exactly what it looks like. 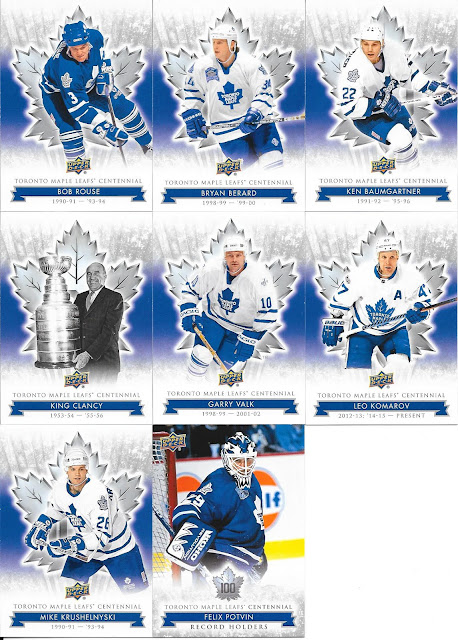 King Clancy holding the Cup - great card, nothing else to say than that about it. The Potvin here is the first record holder card from the short printed base set that I pulled. Nice that the back shows the top 10 with full figures for their saves - a nice concept for the cards. 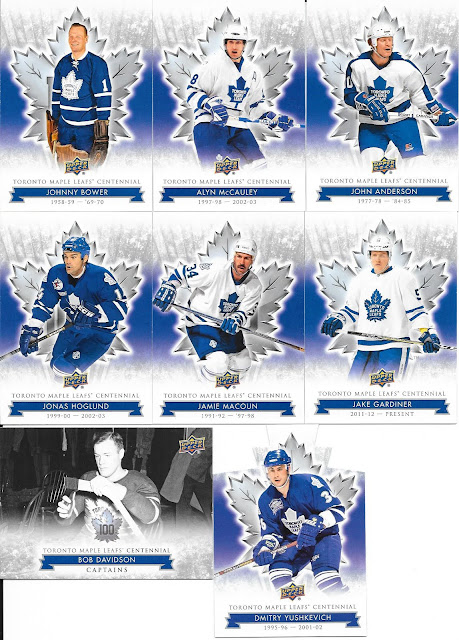 Another die cut with Dimitry. 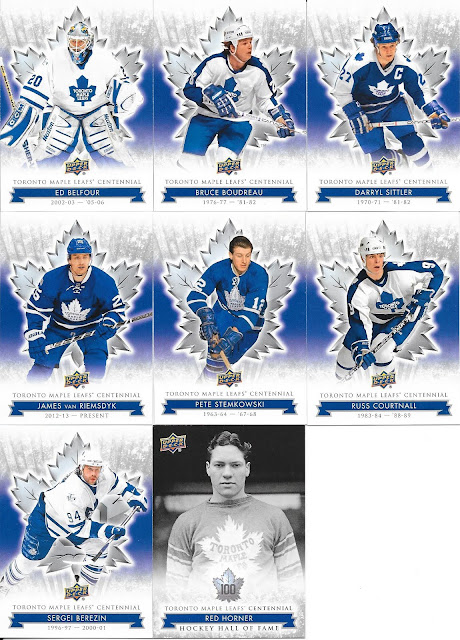 Eddie the Eagle makes for a great pose on the background for the card. Very nice. As for Russ Courtnall, he isn't a Leaf to me, even though he had a good time while playing here - I remember him more an a Canuck. Again, probably because of my more focused time on the Leafs was early through mid 90s. 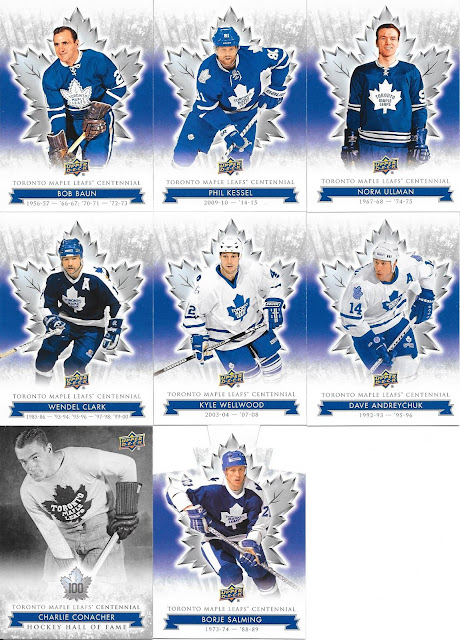 Standard fare for the second to last pack. 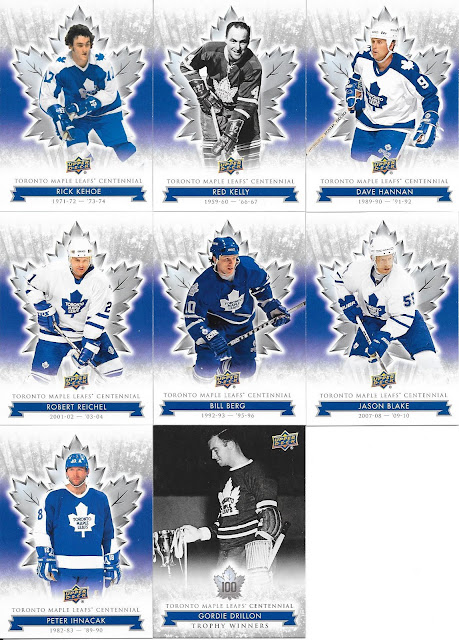 Well, we end with a bit of a whimper. All new base cards at least and that gets the amount through the first tin at 78 of 100. My best guess ahead of the second tine - might get to about 90 of the 100, then I should be able to (or at least I am hoping to) be able to trade to get what I need to complete the 100 cards.
Posted by CrazieJoe at 8:00 AM