So I figure, another wrestling card weekend isn't a bad idea, so another pack of cards from www.FirstRow.ca - again, 15 base cards promised...and we will start with the card which inspired the title... 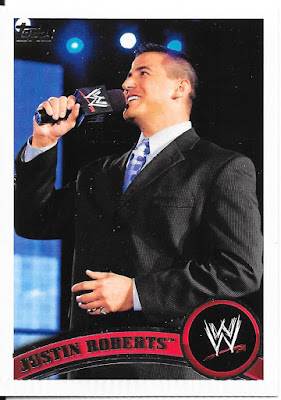 Hard to tell in the scan, but there is a nice full crimp from the card being packaged, right across the bottom. It's almost perfectly matched up with the white border across the bottom. I don't mind these as I consider them error cards - packaging errors. My fondest memory of him has to be when Daniel Bryan used his tie to choke him out as part of the Nexus invasion. 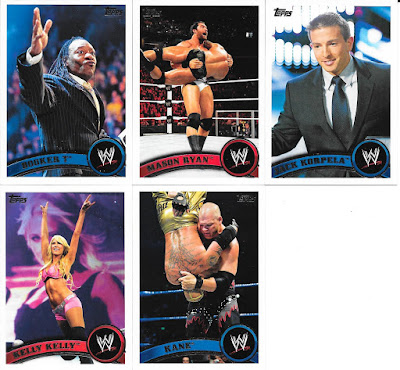 I do really like the 2011 Topps design for the wrestling cards, it is quite nice, and a good use of the brand colours makes for a nice overall look. As for the faces - Hall of Famer Booket T and hall of famer to be Kane are great, and can't go wrong with the girl so nice, they named her twice - Kelly Kelly.

As for Mason Ryan, he never did pan out, but he was a cheaper version of current Roman Reigns, though I have to give Roman more in-ring credit and mic skill credit. 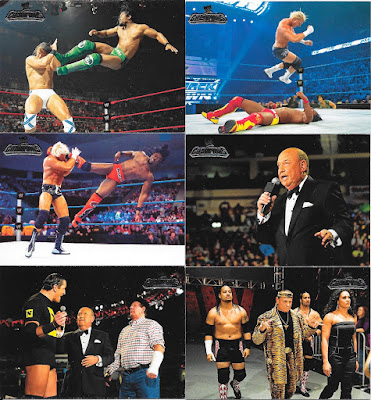 Here - 2011 Topps WWE Champions. Well, if you are going to do horizontal cards, do them right and go full Stadium Club full bleed photos. Not sure I am a fan of having no from name or logo or other symbol than the set, but it does make for photo emphasis. Only issue is making sure the card focus is on the person discussed on the back - for example - wouldn't have necessarily thought the bottom left card would be about Bob Orton.

Last cards in the pack...

Nice 1990 WWF Classics The History of Wrestlemania cards. Interesting that such a set was needed only 5 years into Wrestlemania being a thing, now that we are well over 30 years along.

Another decent pack with some interesting cards and no duplicates, though no inserts, but I am happy for the price of a couple bucks.
Posted by CrazieJoe at 8:00 AM