Then now and forever

Started with the box yesterday, now let's see if there is anything here that beats the odds with the last 8 packs. Having taken a quick look at the odds, should see four more Bronze parallels as they are one every other pack, and one John Cena tribute as those are every six packs. 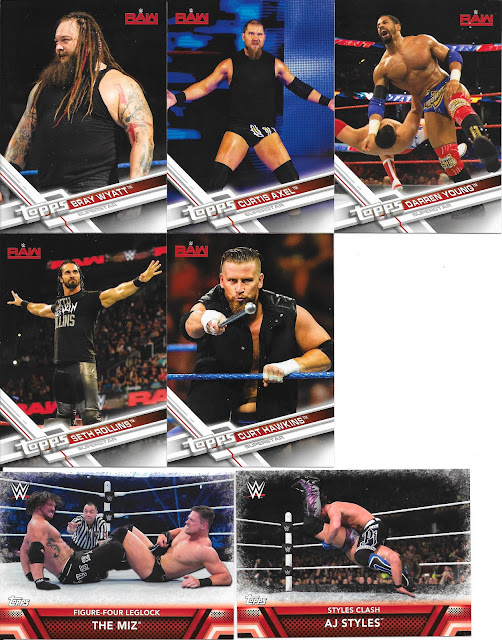 A RAW heavy pack. Again, I really like the photo work on these, nice clear, good shots. Even the two inserts are both RAW brand too (and AJ makes an appearance on both).

Best of the pack personally is the Miz finisher. Personally, Miz is one of my favourite wrestlers of the last decade. Early in his career, it took him a while to find himself, but from all accounts he put in tons of effort, and his drive, even in interviews now, is clear. The man did all he could to reach his goal and savors every minute of it. He has come a long way is a great promo and solid wrestler. 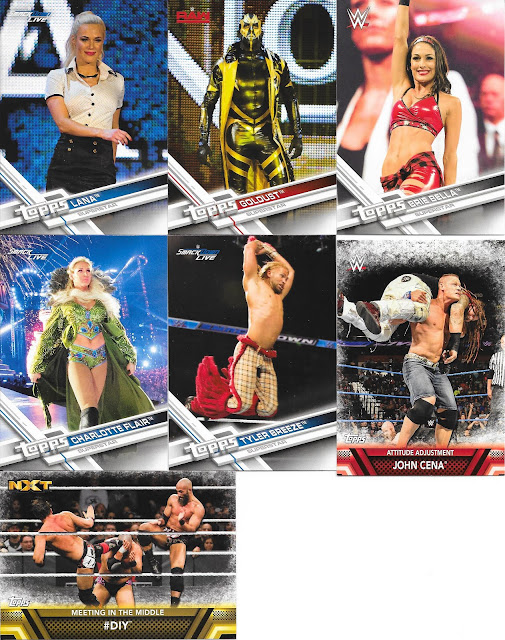 Interesting that Brie Bella gets the silver treatment here - I guess they didn't have her really with one brand over the other at the time of the cards being done.

Otherwise, that Charlotte card is pretty awesome. The Peacock outfit works well and add pageantry or....flair if you will. 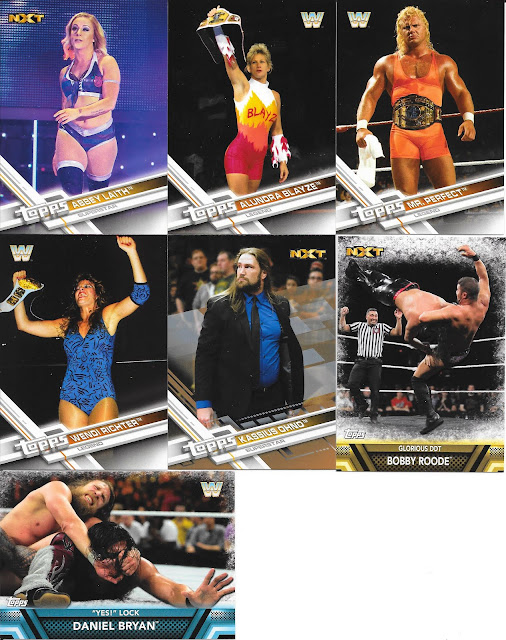 A legends hot pack. I am not a huge fan of the W logo on the legend cards, but I can get over it. Three great legends, though Wendi could have probably been a better picture, but I gather they wanted one with the title in it. 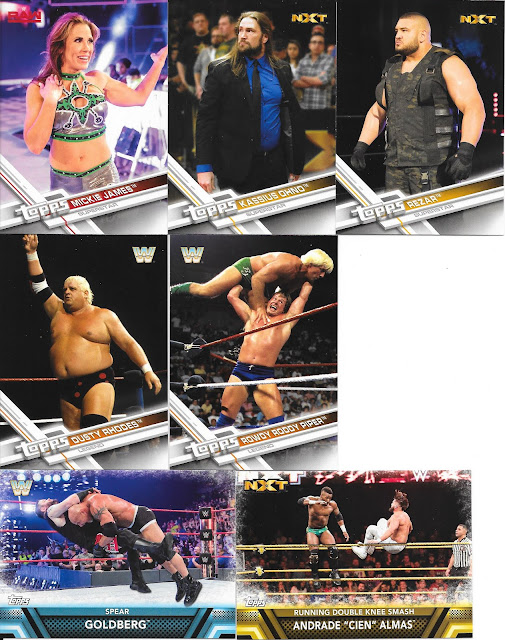 "Just when you think you know the answer...I change the question"....best Rowdy Piper quote and he had many.

Mickie James is a great that I am glad has had so much success in coming back to WWE as she is well deserving of it and is a future HOFer.

Speaking of which....Goldberg. Honestly, I was never a fan back in the day. Mostly, although I religiously watched WWF and WCW, I was full WWF guy. Goldberg bothered me because even then, he seemed like a guy in it for himself, and the attitude just seemed to be there. By the end, he just didn't seem to care. Also, he kind of finished of Bret's career which didn't help his case with me.

I will say, he redeemed himself somewhat with his recent run back in WWE which was enjoyable. Though, as much as he says he was wrestling for his son - I can't help but here it as him wanting to be a super hero to his son more for his own desire. Then again, I am probably too jaded on the guy. 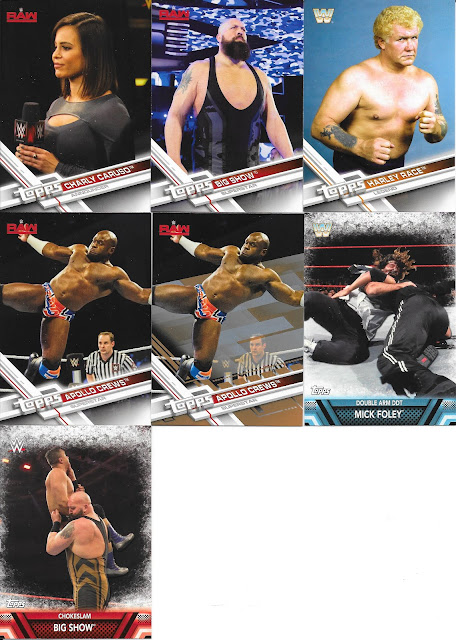 Apollo gives a perfect example of base versus bronze with the side by side here.

I am a bit surprised to see the Charly card and as good as she is, it really makes me want to get a Renee Young card. I digress here but it was great seeing Renee start out on Aftermath on Score here in Canada before getting picked up by WWE. Must have been a dream opportunity and she has done well with it. 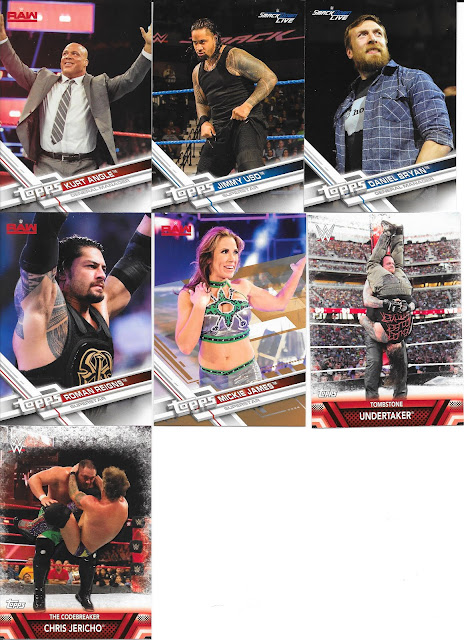 Sorry Jimmy, but you are the odd man out of this pack. Massive star power through this one, and the bronze Mickie to boot! 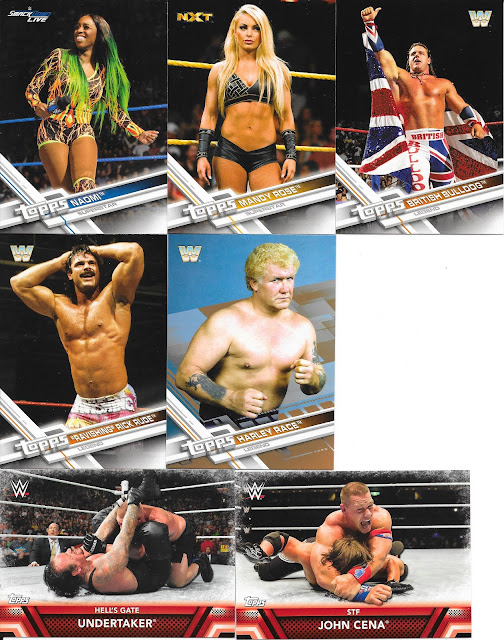 Another hot pack of HOFers including the bronze Harley.

My only disappointment in this pack? That they didn't use a photo from when Lesnat was giving Undertaker the finger before losing in this match - that was a solid moment. Wonder why they wouldn't want that enshrined on a card kids collect.... 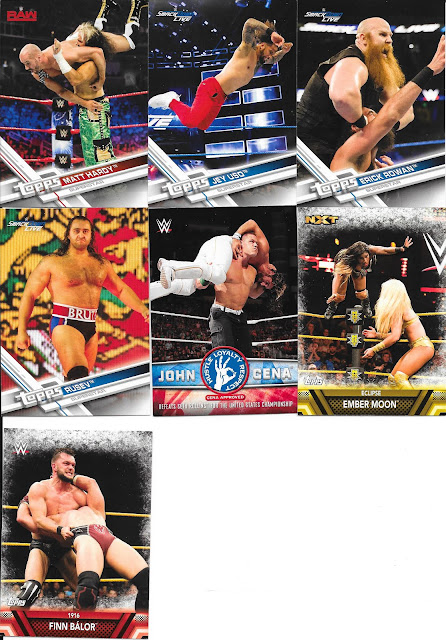 An underwhelming pack, but there is the John Cena insert I expected.

Overall - a good first foray into wrestling cards, and I enjoyed it. Definitely gives me the itch to pick up a couple assorted boxes of wrestling cards in the US this summer, if nothing else before then.

Also, nice not to get any dupes I don't believe so, that's always good too.
Posted by CrazieJoe at 8:00 AM