I love wrestling. One of my earliest memories is watching wrestling with my mom when I was a tot, including Hogan winning the title Jan 23, 1984 (when I was 3). For whatever reason, I have a number of memories from a really young age. I watched Saturday mornings, usually at Grandma's with my cousin. I watched the evening specials in the late 80s. I remember turning in the PPV channels back when they use to just be a scrambled mess that you paid to unlock, and coming from a poor family, playing with the tuning on the old TV to fix the warbled screen a bit and listen to the PPVs.

Of course O also watched the first Raw in 1993, and almost every single one since - I am sure I have missed a few over the years, most notable when each of my two children were born because of course, they figures Monday night was the best time of week to show up.

These days, I watch every Monday (rarely a Smackdown on Tuesday just because it is too much time in the evenings to give up, but I am trying to get better at watching them, especially with Daniel Bryan "back", I watch all the PPVs and my cousin and brother come over for the big 4. Of course there is the WWE network as well.

So why has it taken me so long to get back into wrestling cards?

I don't know, but it feels a bit like a home coming.

I had some of the mid and late 80s cards back in the day, but those long left my possession. The only keep over was a 12 card set of Swanson cards - that was it except for one purchase about 5 years ago. On a trip to the US, I picked up a box of 2007 (I believe) Topps Rivalries cards because the box was $15 at Dave and Adam's. That is essentially the starting point of my wrestling card collection.

So today I am sharing my first paid for wrestling card product in the last five years, and what is likely to be the start of a collection I have some straight forward goals for:

1) As with my others - I will collect unopened packs

2) Unlike baseball and hockey where the focus in team based for me with the Jays and the Leafs, I am happy to collect all cards, but will keep it to North American wrestling cards (so no Japan for me as it just doesn't connect with me)

3) Have fun collecting it because frankly, shouldn't that be a goal in any collection?

So today, I am going to start with sharing.... 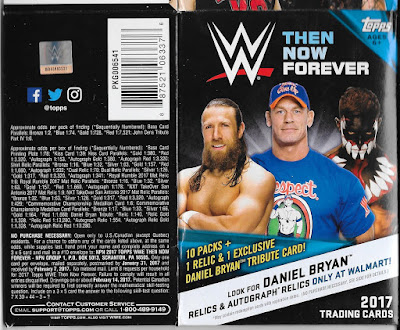 I picked up a last remaining blaster from Walmart of 2017 Now Then Forever because - no need for it to be brand new to be brand new to me anyway. Paying $30 for this reinforced that I want to pick up some assorted wrestling pack boxes when the family goes to the US later this summer. Awesome options there that remind me why I miss Target up here.

As for the box - Daniel Bryan, quite appropriate still now with his return this year to in ring competition, John Cena who is the face of the company (sorry Roman), and Finn Balor who deserves a main event spot. 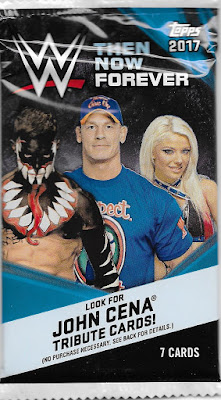 Nice to see Miss Bliss get on the pack here - definitely one of my current favourites in the women's division.

There was also this... 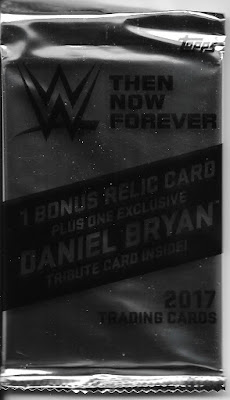 Yeah. The box promises a bonus relic card and a Daniel Bryan tribute card. Well, these are in an unopened pack so...as hard as it is....this gets kept in the unopened pack collection.

I will open one pack now, and the rest tomorrow, in all there are 9 packs so one today, eight tomorrow. 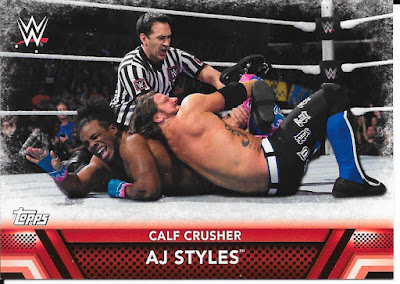 A great way to start with a nice AJ Styles Finisher insert card. Great photography which is not surprising. AJ has been amazing since coming to WWE (he was great before, so no surprise there). 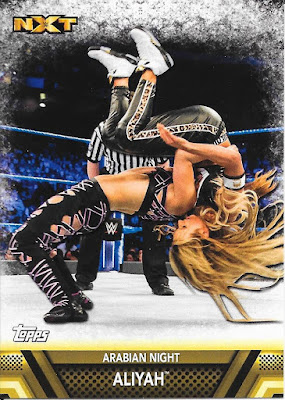 I do watch the specials of NXT and keep an ear to the ground, but don't watch the weekly show often. I don't know much about Aliyah, except she is from Toronto, Ontario, Canada (yay hometown!). A second finisher insert for the pack.

Also, the inserts, similar to the base cards are colour coded to the show (Smackdown blue, Raw red and NXT yellow). 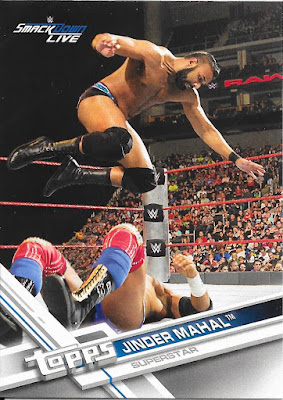 Like him or hate him, have to give Mahal credit for reinventing himself as a character and being a main event player for a good part of a year (an still being a mid card level guy) considering he was low man on the 3MB group totem pole years ago. 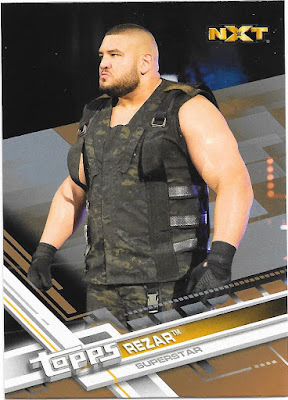 Half of the Authors of Pain team. This is actually a Bronze parallel which come one in every two packs, and which work well with the NXT colours. 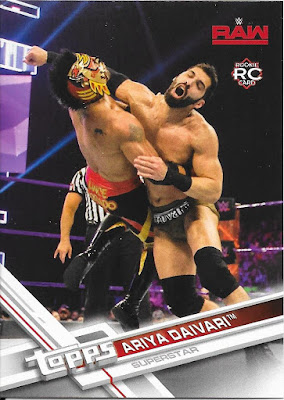 A decent rookie card logo which doesn't get in the way (which is nice to see). 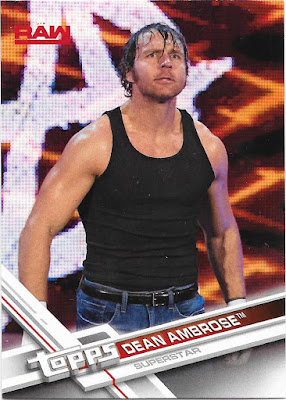 One third of the shield. When the shield debuted I would have expected he would end up the star of the group, but the way it worked out, Roman being pushed as the face of the company and Seth being put in a number of high profile story lines, it hasn't worked out quite that way. Dean has had a lot of success, but not a clear winner as I would have thought. 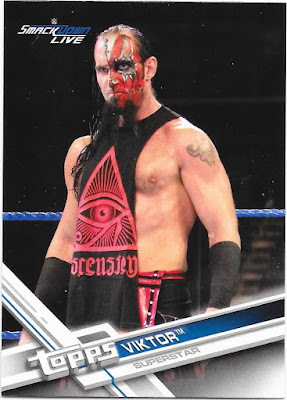 We finish with one half of the Ascension.

A fun pack and some good cards and packs. Lots of writing, but there will be more packs and cards tomorrow.
Posted by CrazieJoe at 8:00 AM