It has been a good while since I have done one of these, so why not a series of 4?

I have mentioned many times, one of the items I collect are unopened packs of cards. I really enjoy it for a number of reasons such as the artwork / stars represented at the time, the change in look over the years and the change in technology in making the different packaging, oh, and also, the ads which use to be on many packs.

I may not show all of the packs I have in each of these, but figured I can give an overview of many of them.

In most cases, I have shown these on the blog in one way or another, as many of them came to be in the last few years of my blogging, but here we can share them all in one place.

I figure, the easiest place to start is the smallest of the collections as I only have about 30 wrestling packs, most of which came from the Dave and Adams purchases last year. 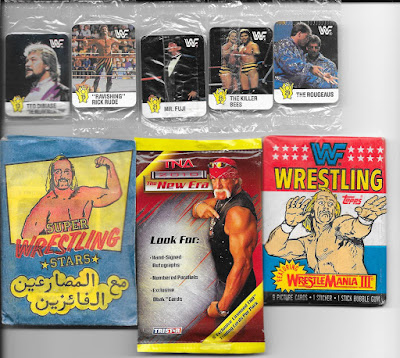 Now, none of these were from Dave and Adam's, but these are the older packs that I have picked up. I believe the Hostess from trades and the rest from Listia. 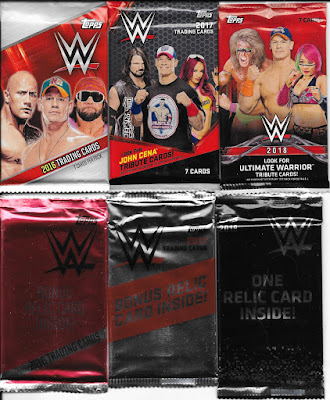 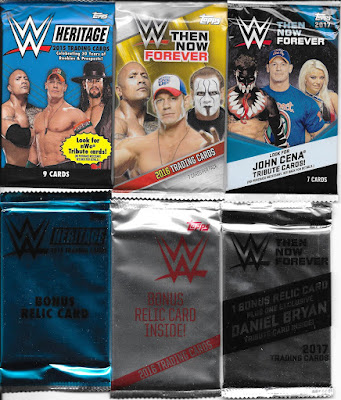 Now these, would be from Dave and Adam wrestling blaster boxes which I picked up last year. I know, I do even keep one of the relic insert packs from blasters. I like the mystery in not knowing what's in there, and thinking of course it is the best, when it is probably the most generic relic...maybe. 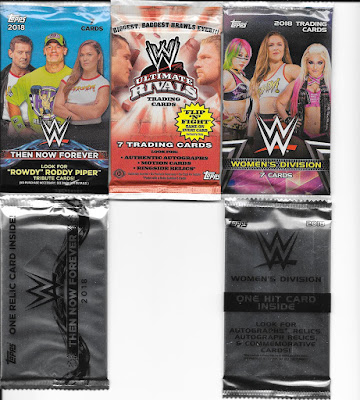 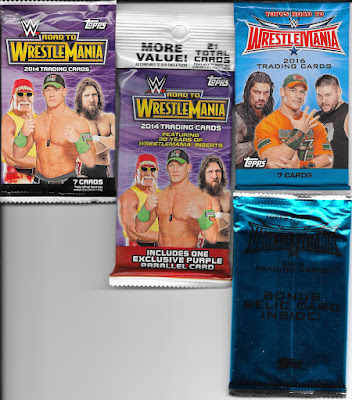 Interesting on who is on the front of some of the packages. Not surprising to see Hogan on the packages from the 80s...or even the TNA pack because he was still a big name they added to the roster. Then with the more current packages...Rousey, Cena, Reigns, Bryan...and Hogan.

Now I get Hogan is by all means one of, if not the, biggest star of wrestling. Completely get him being on packaging in the 80s, 90s, and even to the TNA package, but don't think he is really necessary on the packs today (regardless of the issues he had over the last 5 years or so away from wrestling). I can accept Cena still as he isn't that far removed from wrestling in the WWE, and would still show up on occasion, but otherwise, want more Owerns, Bliss, Rousey, Bryan, etc. Keep the focus on the current stars and current product - that should be the focus all the way around.

Tomorrow...a check in on Magic packs.
Posted by CrazieJoe at 8:00 AM