It's ShoTime! and A trade to be completed later...

First, as everyone is aware, Gordie Howe passed away the other day at the age of 88. I never got to really see him play as he was a bit before my time as a player, but he stayed around the game and I did see him on many a hockey show. As a player, his career speaks for itself, and as a personality, he always came off as a great ambassador of the game of hockey - he will be missed.

On a completely different topic...I had a nice little trade with ShoTime over at tradingcarddb.com. I found a home for some more 1994 Panini stickers and a few other cards, and received the following in exchange...

I didn't have any 2003 Victory cards in my collection, but down now... They almost look like the back of a set of playing cards. Definitely an interesting presentation, but seems to waste a fair bit of front card real estate.

Paul Molitor (awesome player, always a Brewer in my mind), a great Hutchison insert, and the team card which makes clear that the Toronto team was a year of really, two different teams - the one that started 50-51 and that then finished 43-18. I guess it doesn't really matter how you get the 90/100 wins, as long as you get there!

I have had a number of good back and forth trades with Mike at Not Another Baseball Card Blog. He recently sent me some of his extra Jays for future considerations (to which I have a few ideas in mind already...). Funny enough, I work in Toronto and Mike is about an hour out of it - if things align we might actually meet up one of these days - would make it easy for a bigger trade! Anyway, time to show off the goodies he sent... 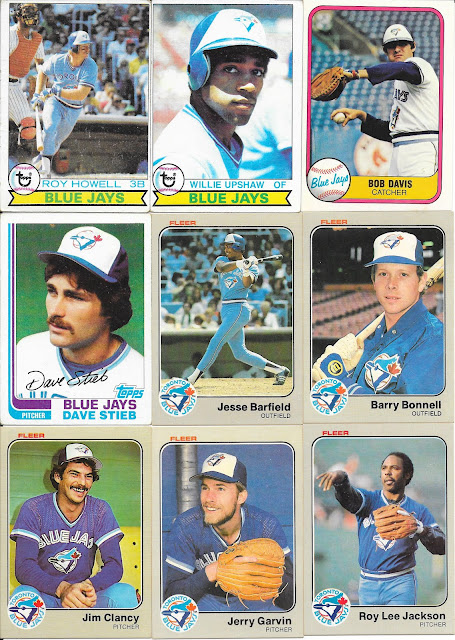 Love the Barfield picture in the middle, a nice action after swing shot. The early Topps fill a could holes, and the 1983 Fleer cards are great as I only had one of these before. 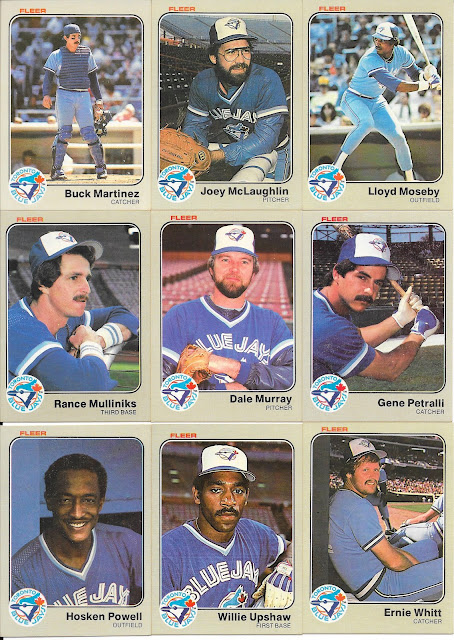 Wow - a lot of 1983 Fleer - excellent. I will say, the border colour (which dominates the backs as well) is ugly. Not my favourite at all, but they can't all be winners. Another surprising thing to see....a nice young Rance Mulliniks and the same can be said of Buck Martinez. Buck has had a bigger career as an announcer than he did as a player - though his playing days were cut short due to the leg injury he suffered. 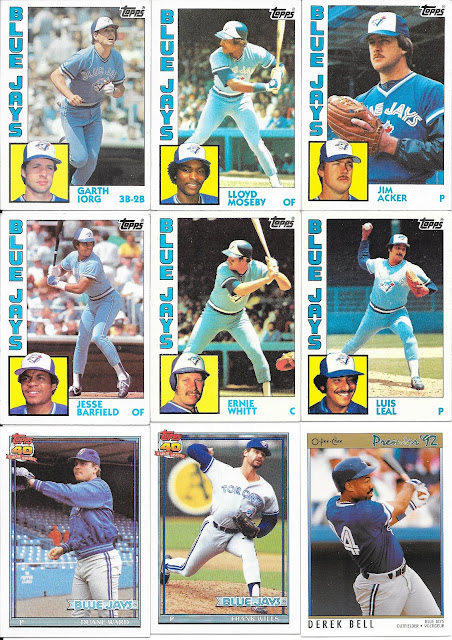 1984 O Pee Chee were some of the first cards I had growing up and getting the Topps counterparts is nice. Derek Bell ended up being a decent enough player, but from what I recall, he was one of those "next big things" as far as the initial speculation went, though he never quite made it that big. 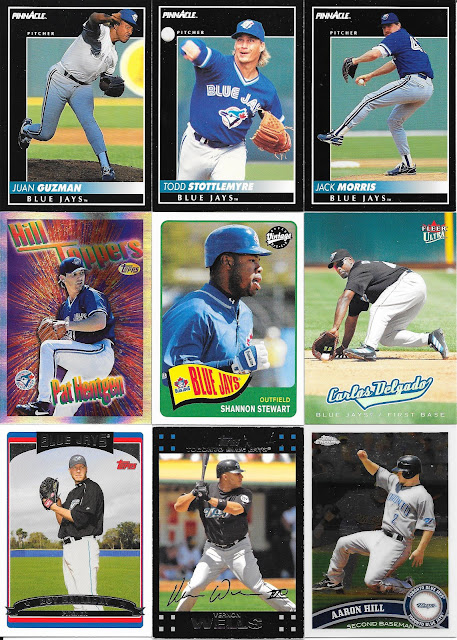 Upper Deck Archives - first card I've got of such set is the Shannon in the middle. Similarly, my first Hill Toppers card in Hentgen as well which is quite colourful.

To end it off, a few more newer cards, and I have to save, I really like the Morrow given the 1984 Topps design.

To top it all off, these also pushed me past 2,000 Jays cards - card number 2,000 being, aptly enough, the Dave Steib 1982 Topps card, so thank you for helping with that achievement Mike, and I will work on something over the next week or two and let you know when I get it out to you!
Posted by CrazieJoe at 8:00 AM