To be honest, I can't remember how many times I have been lucky enough to get multiple Leafs pulled from any given 20 cards of the Santa Lot - just doesn't happen very often at all. Well, why do I mention it...obviously because it just so happened today. Not nearly the amount of Leafs that we saw in the Lightning recently, but not a problem. 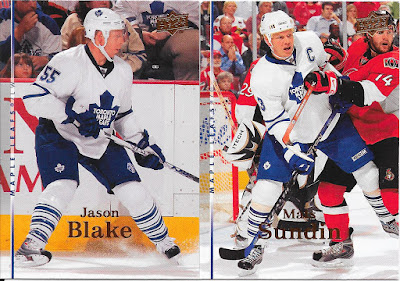 Unfortunately not new, though only have one other of the Mats, so good to get a second for purposes of probably completing the Series 2 of the set (and then debating whether to go after Series 1 as well). 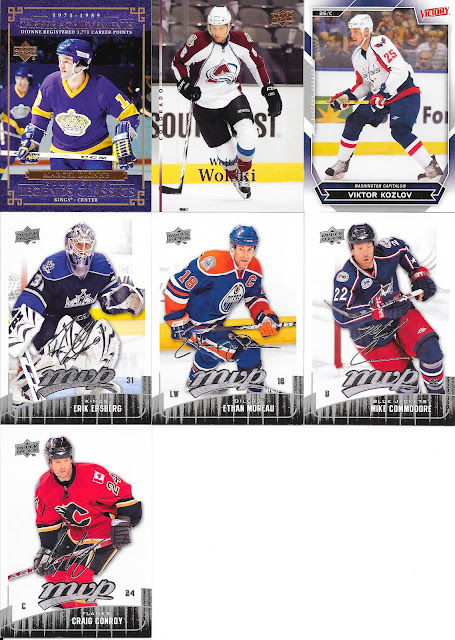 Nice to get the base edition of the Marcel Dionne Legends Classics card since I "only" had the platinum version to date, so the base works on the base set well. Wolski knocks one of the few remaining cards off of 2007-08 Upper Deck series 2 - I should see how many are really left to get at this point as I think it is getting low enough to start tracking, but I could be wrong.

Also, not a bad thing getting a few 2009-10 Upper Deck MVP cards because there haven't been many, and although MVP is a lower end product - wouldn't bother me any at all as I am not that hung up on high end versus low end products. 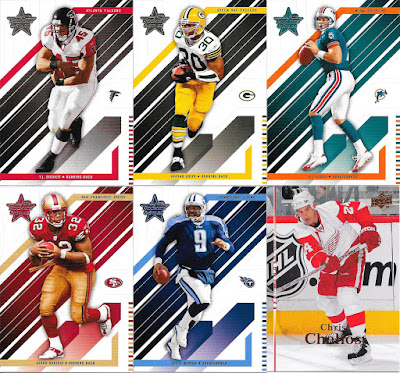 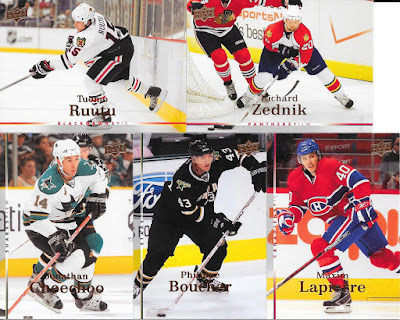 I will admit there is one card from the 2004 Leaf Rookies & Stars set that I do hope I get, and that I would actually keep. No surprise probably that it would be the Brock Lesnar rookie card. I wouldn't mind throwing that one my wrestling related materials shelf. I don't have much for wrestling cards and as I mentioned before, not really looking to get into it, but I do have a couple unopened packs, one complete set, and a couple odd cards out of interest, and the Lesnar card would be one I'd keep out of interest as well. Side note - fave wrestling card set? Has to be 1985 Topps - I wish I kept the cards of that which I had as a kid as those would be worthwhile to still have (and would have been bought at the right price circa 1987 or so - though the prices aren't too bad still).