First, I have not had the chance to give a huge thank you to GCA. At the end of April I received a box of cards, and had sent a box out to him (a lot of football including plenty of 1991 Upper Deck). I have not had a chance to get into it yet given the end of busy season, so I am going to go through some of the cards here starting next week end. Should be a good time, so be sure to come back then.

As for right now - I want to share some cards which are probably from the furthest place I have gotten cards from - Hawaii!

Was able to do a little trade with jennielove. 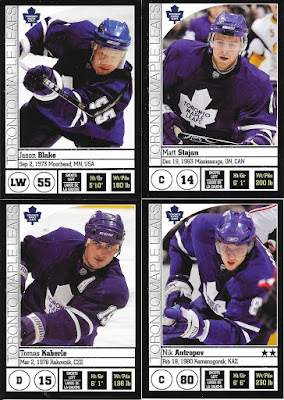 As I have said before, I do not go out of my way for stickers, but readily accept them like these. Honestly, I really like the fact you get a couple stats on the front. The colours are not great - rather than black, may have been better if team tinted, but overall nice design for stickers. The rest of the cars were these - 2016-17 Upper Deck Series One. Seeing as how I am not our there buying packs every day, so greatly appreciate any newer cards that I can get in trades!

Was not surprising that the mail took a few weeks to arrive, but was well worth the wait!
Posted by CrazieJoe at 8:00 AM