on't talk about my work often, other than when times are busy. I work in an accounting firm in downtown Toronto - typical desk job to most, but I started at the firm as a co-op, then started full time after school was done, and been there about 16 years now (a long time considering I turn 37 this month).

Our firm has tickets to the Toronto sports teams for going with clients and what not. I usually end up at a Raptor game or two each year and a few Jays games (one Leaf game a while ago too). As it turned out, one of my coworkers went and ended up winning a couple prize packs draws and brought the Jays stuff into work.

Sure there were Jays T shirts, a couple hats, calendar magnets, but you know what I looked for... 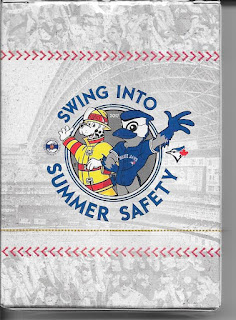 A freebie for me, and a nice add to the collection this is the 2017 Blue Jays team set as named on the package. Not often I get sports cards from work.

As for the below, I won these a while ago on Listia, kept one and here are the three I am going to open. I only have 38 of the 575 cards to this set (the whole set - I know we are just looking at series one here), but would love to add some Leafs or inserts, so let's take a look at each pack and see what we get (man, I enjoy opening new to me packs as I have never opened these before...I think...).

Pack 1:
With 12 cards per pack, let's look at the bottom six and top six of each pack - totally biased by me of course! 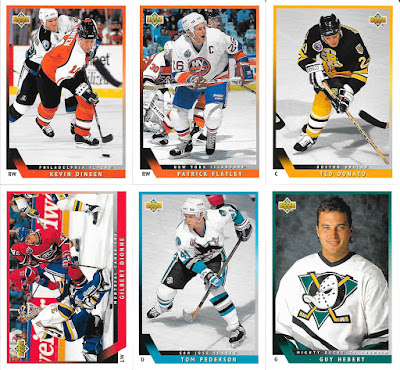 Here are most of the base cards - decent photography, and some nice first year Ducks cards with a Guy example here. 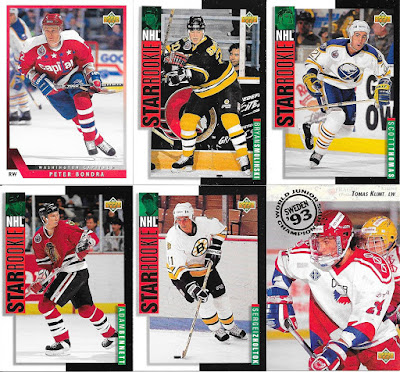 Wow - four star rookies in one pack - not bad! This is a subset in the base set, still surprised they had this many in a single pack. 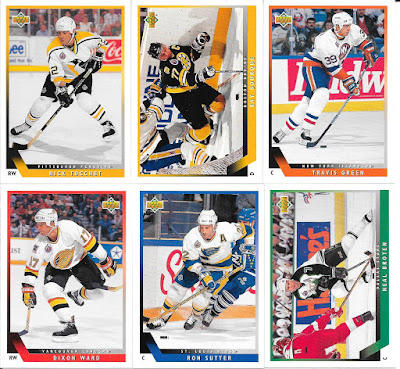 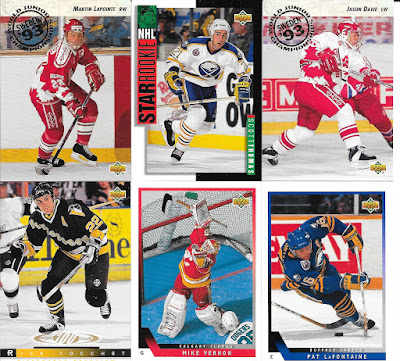 More subset cards from the base set, but my favourite is the Vernon photo for being so different with the odd perspective - extremely nice. I will even give the Thomas a pass though it was a duplicate, since it came from a subset. 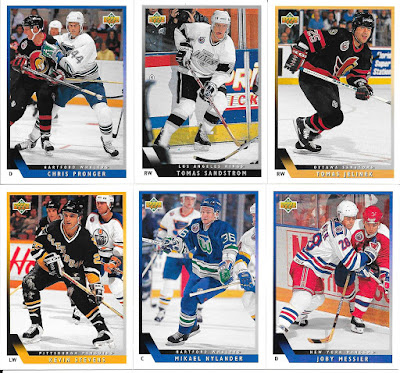 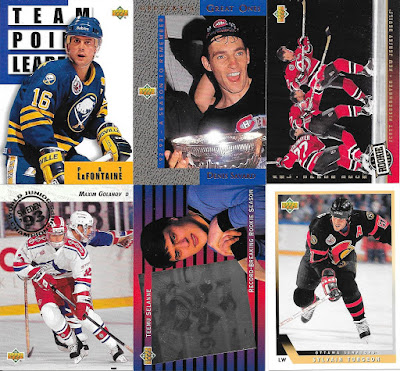 Though this is by far the best of the three with two different insert cards. The Team Point Leader card for LaFontaine (a player on my like list) is nice also, but the Gretzky's Great One Savard and an awesome little Teemu card make this a great pack.
Posted by CrazieJoe at 8:00 AM