I can think of no better pack of cards to open on Remembrance Day than one that helps to recognize those who have fought for their country. So first, a thank you to all those who served - more specifically the Canadian troops, but for those in the US as well.

Without doing any research, I can't think of any cards off hand that would have a Canadian flavour to them (there may be if we go way back to cards around the time of the first or second world war, but those wouldn't be something I'm likely to ever see in hand), but in the US, there was this 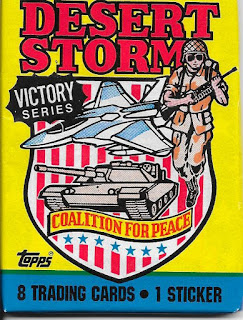 I know some people who are heavy into history love this kind of set, and most likely already have it as it came out in the midst of overproduced cards.

No idea what to expect, but a quick look shows me that this set came out in a 264 card total set with a 44 sticker insert set. It was released in three series, the first is 88 cards and 22 stickers. The following releases were subtitled Victory (this one) and Homecoming.

Well, let's go ahead with this one... 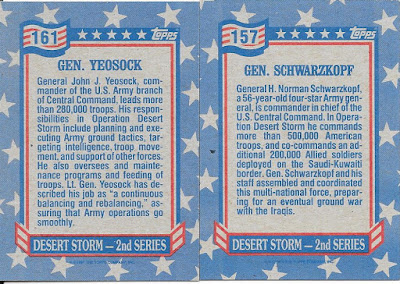 Some of the cards focus on important people in the army, and details the role in Desert Storm. 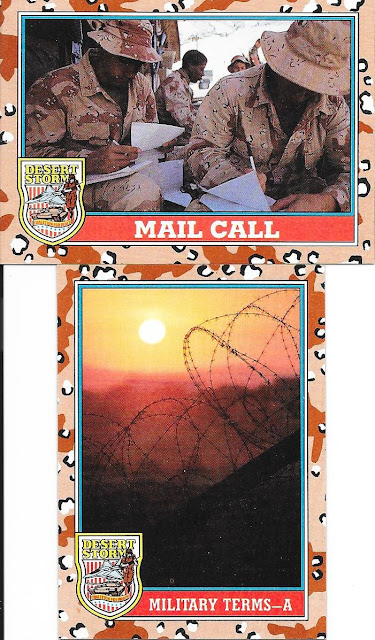 Some of the cards are a little more generic in providing some information on military life and terms.

Personally, these are the ones that would interest me most - given the technology as it is interesting to see how technology has changed, even in the last 25 years (or even, how it stays the same). 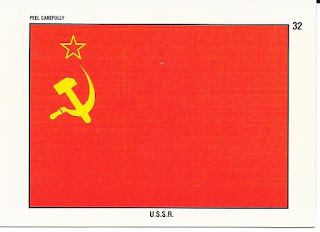 As for the sticker insert, I have seen these before, and they do double duty with the sticker as shown here, being a country flag, and the reverse side is a piece of a larger puzzle.

An interesting set overall, not something that suits my personal collecting tastes, but I can understand the draw for many.

If you served, or you know someone who did, pass a thank you along from me!