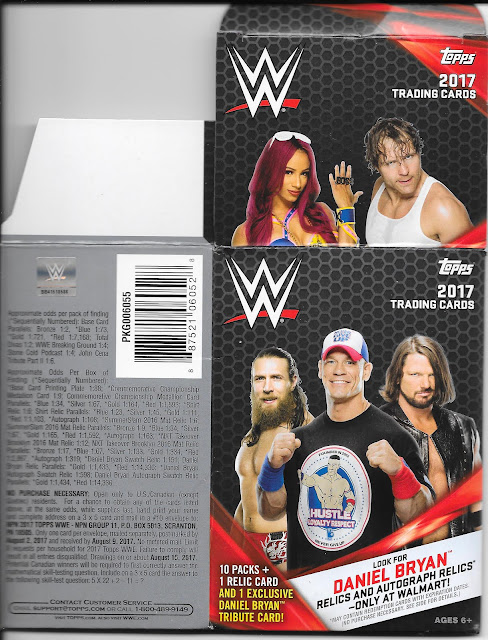 Today we begin the next blaster from Dave & Adam's Card World - some 2017 Topps WWE flagship set. The box shows a number of big names - Cena, AJ, Daniel Bryan, Sasha, and Dean Ambrose. Not shown here, it also includes Shinsuke Nakamura and Demon Finn Balor. A bit surprising no Brock on this one, but no matter.

We get 10 packs plus the Relic pack, so as per usual, I'll skim off one for the collection... 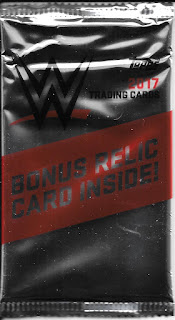 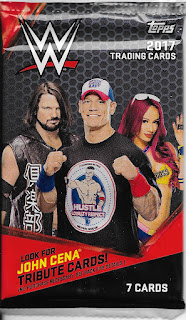 A rearrange of the picks from the box (or vice versa) and we get AJ, Sasha, and Cena on the packs.

So, as we start, I have 6 of the 100 base cards already, and with about 40 more new cards here, might get a dupe or two. There are a number of variations to the base cards which are short printed, but doubt I will see any of those here. I do hope o get a couple rookie cards like Bayley and Alexa Bliss, but not a big fan of how, in wrestling, Topps treats all cards in the year for a person, as rookie cards. 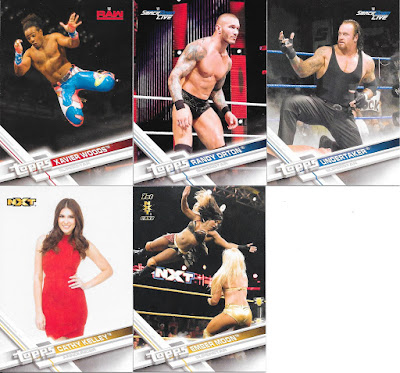 Right off the bat, some nice base cards with Undertaker and Orton, as well as Ember Moon. I like that they include some refs and announcers, as they are an important part in the presentation, so good to see Cathy Kelley as well, but I would rather an off-white background at least to give it a little more. 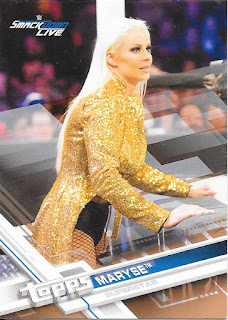 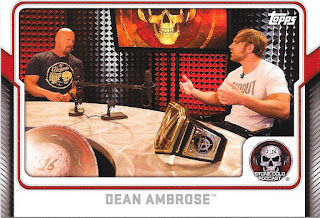 The inserts/parallels include a sweet bronze Maryse - a great Canadian. Maybe not the most technically proficient, but serviceable, and the character is excellent, playing well with the Miz.

Don't really care much for the Stone Cold podcast inserts, but get one of them here.

Today, I also finish highlighting the wrestling card box from DantheMan I received back in December. Funny that I ended up getting a bunch of cards here that RAZ was also nice to send to me around the same time, and which I summarized back in early January. It does mean that I will be able to get a good package of wrestling cards aside for someone else, but still want to share these as Dan was so awesome to send these along.

First, a complete insert set of the Women's Champion inserts... 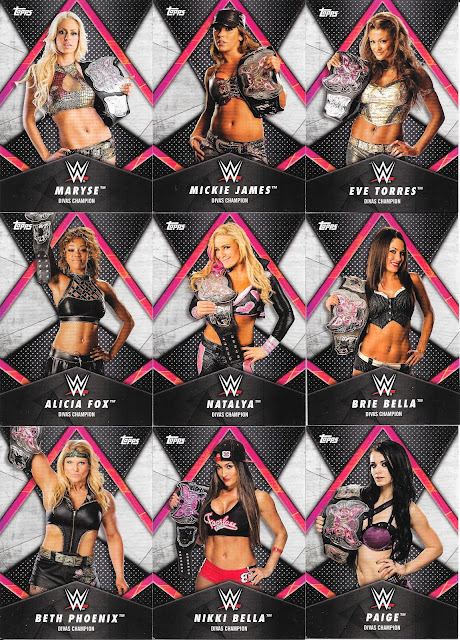 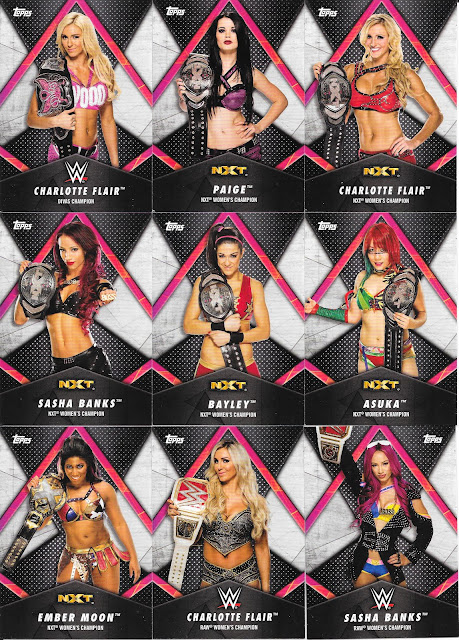 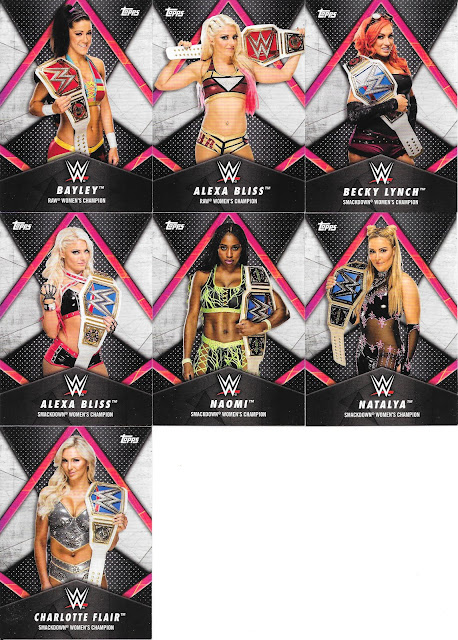 A nice little insert set by itself, that scans really well all together like this (which, as I have one, I will put aside to send to someone if anyone is interested).

Then we also have almost the entire (2 cards short) insert set for the 2018 Royal Rumble entrants... 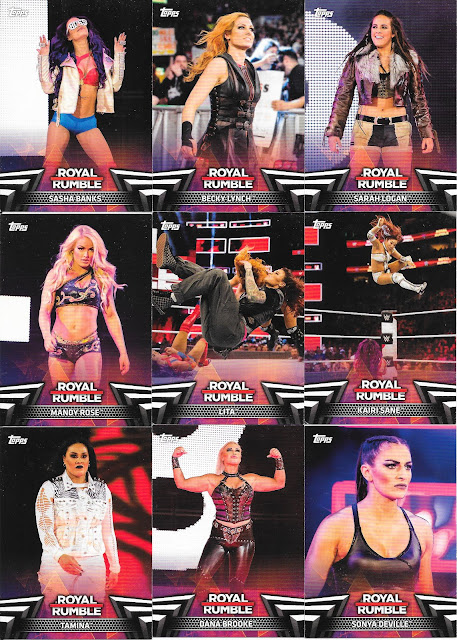 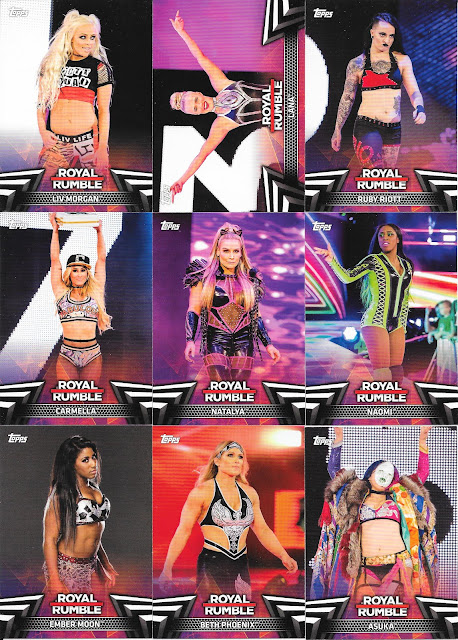 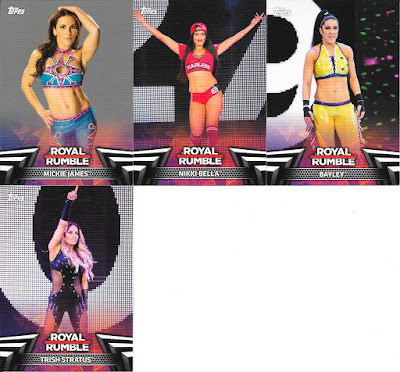 As well as a bunch of base cards as well... 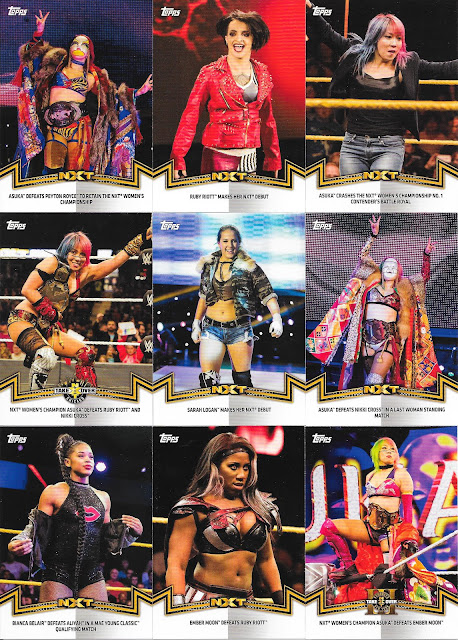 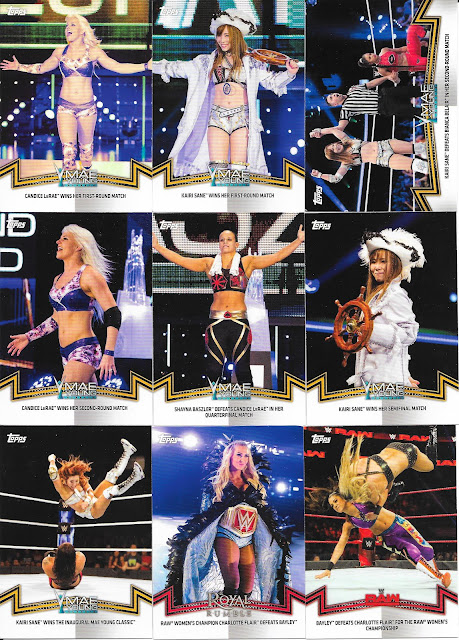 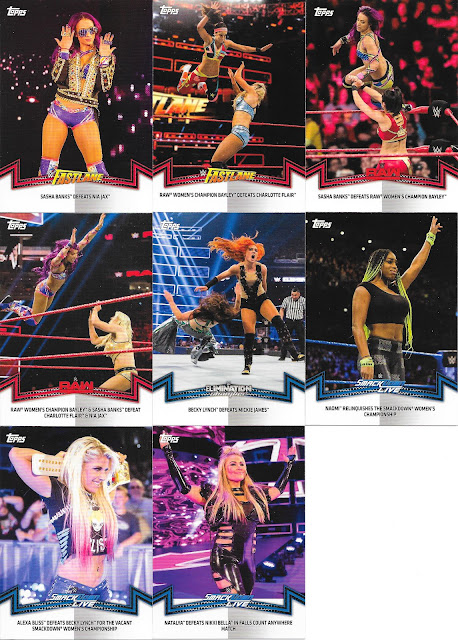 A great bnch of cards which I will ensure to be passing on, most likely as a pay it forward when I find someone in want of some wrestling cards.