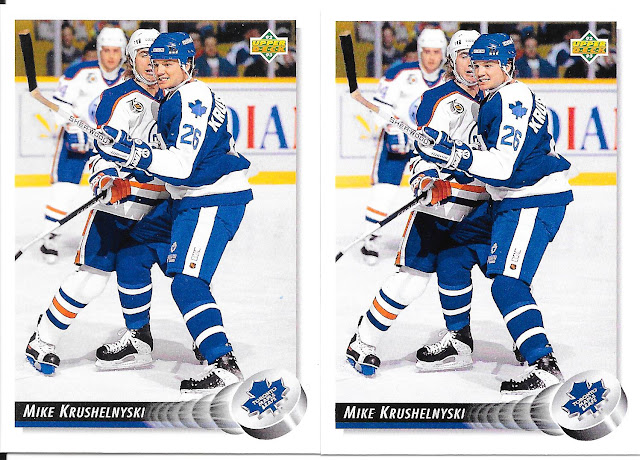 Not new to the Leaf collection, but this is a set I have in "slow build" mode already, so happy to ensure I get a copy for that. What I didn't know, and found out here was that there are two different holograms for these cards - one with just the Upper Deck logo, and one with the logo and "Upper Deck" text also as the light changes the hologram reflection.
For my set build, I don't care which of the two versions I get, but for my Leaf collection, I will have to go through my cards at some point and check what I do and don't have as I would want to have copies of each because I am particular like that. 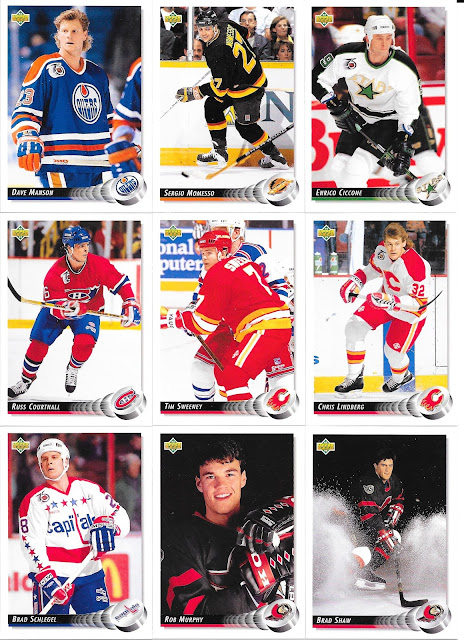 As I say, this set is a set build, so these are the keepers out of the bunch today. Classic early 90s Upper Deck design, and that's a good thing. It may be a bit minimalist, but puts the focus on the player which still doing a good job of providing clear name and team logo on the front.
As you can tell, the Senators here had not yet started playing - at least not this incarnation of the team. The senators were a team from 1917 through 1934, and a successful one at then. Was just a small hiatus until their return almost 60 years later. 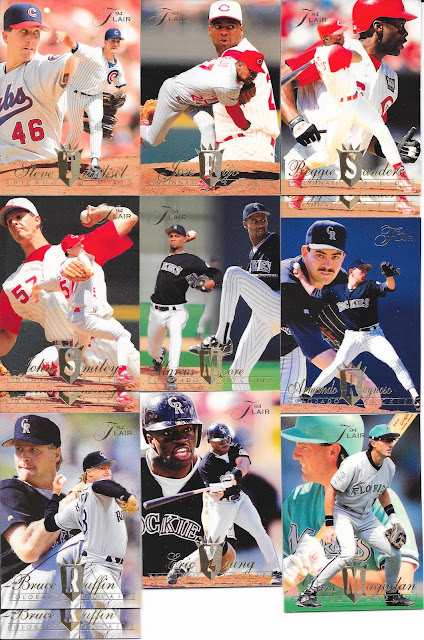 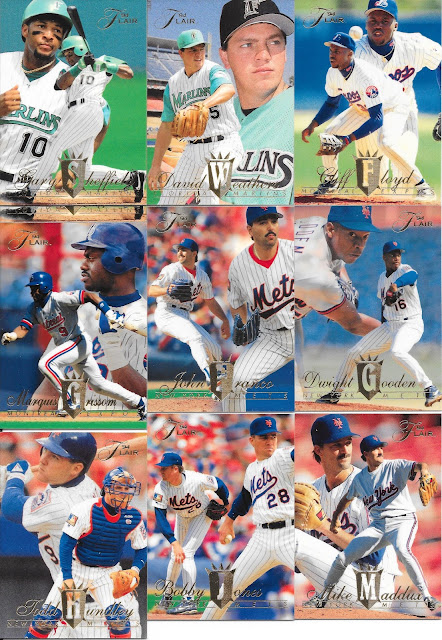 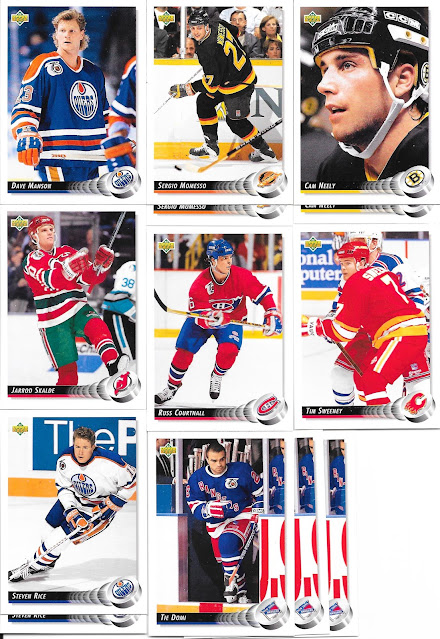 The rest of what appear to be the chunk of 1994 Flair baseball, and the 1992-93 Upper Deck hockey had a run of cards which included some dupes, and some cards I already had, no problems there. 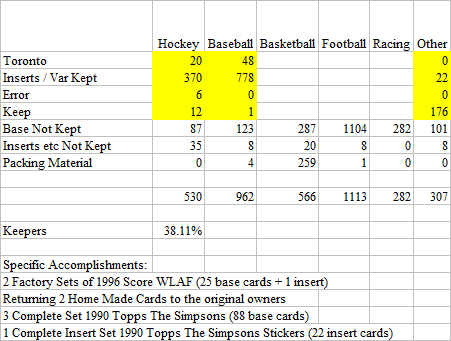 Before parting for today - something Magic related to share. As I am running out of sources for unopened Magic packs that I am missing, when looking at my usual sources, one of the more recent ones added has been Troll and Toad. I picked up a few packs there before, and there was a Lowryn pack (circa 2007) which is missing my collection - or at least was. 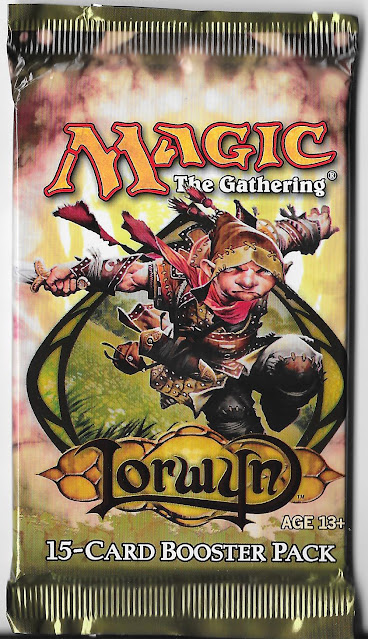 To show how prices are going crazy on old Magic sealed product...I bought this for $37 USD, but when it arrived, the price on the sight had already bumped twice and was at $45 USD. Insane for a 3 week period. I'm torn between it being a bubble and me being better off waiting to get other packs, or getting more now before prices keep skyrocketing in a "now or never" type scenario.
I'll have to check out Card Kingdom next I think. It's a shame there isn't a lot of Canadian options for Magic card old booster packs, and I am working through US options, but still - I have been able to backfill the missing games now that I have booster packs from all expansions current back to 2010. All in, I am still missing 23 booster packs to go all the way back to Revised from 1994. Honestly at this point I think Alpha, Beta, Unlimited, Antiquities and Arabian Nights and Legends are all off my radar unless prices plummet since the cheapest of those is about $1,000 for a single pack of cards.
In peeking around the sight, also found you could buy random silver border cards which would be common or uncommon for a penny each. I like the joke cards, and there are a bunch of artifacts I could still do with, so for $1, I threw in 100 cards...couldn't go wrong! 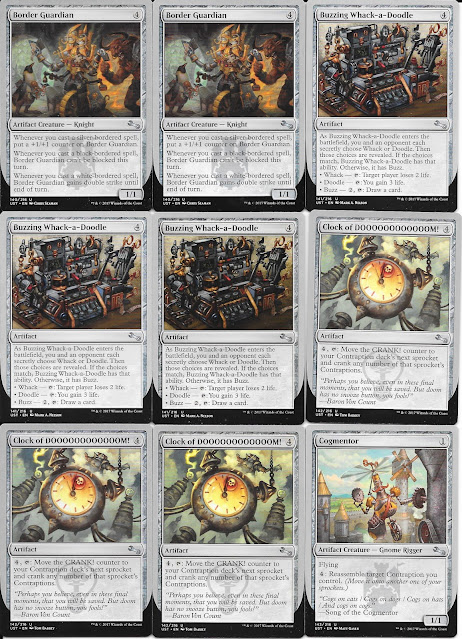 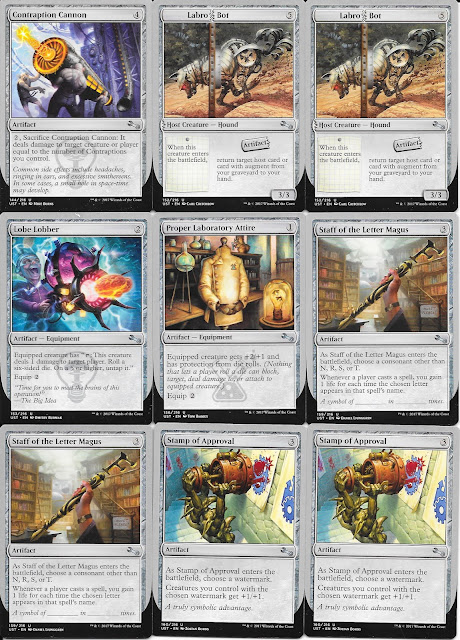 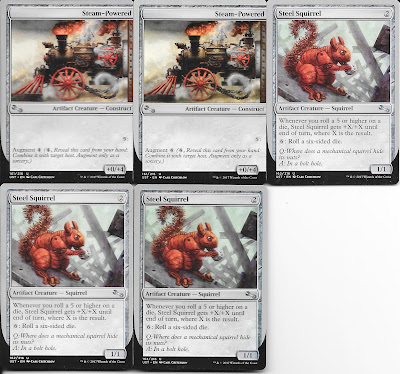 There are the cards I am keeping - a couple new ones, but mostly copies I do keep since I keep four of each. There were a couple extras that my son quickly took away to his room. Interestingly, all 100 cards I got were uncommons which is cool. Not that any were really valuable, but still, no commons so 100 uncommons for $1 is pretty awesome regardless.
A bit disappointed all are from the most recent set - unstable - but I thought that may be the case given the price and the other grey bordered sets are much older. 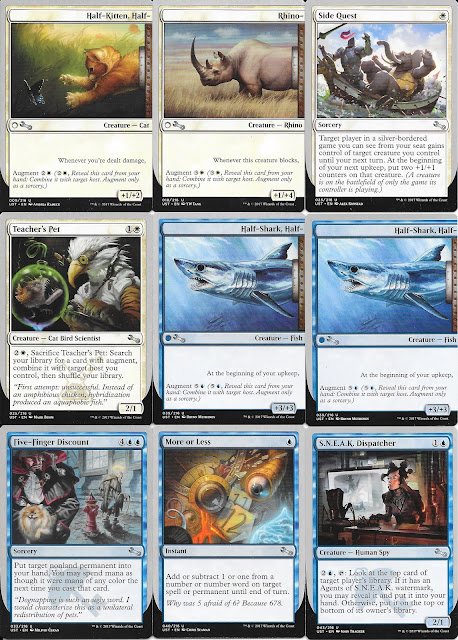 I also gave my son a bunch of the rest because I don't see really much trade value in them and he was interested, so maybe it'll keep sparking collecting for him which is just as good. 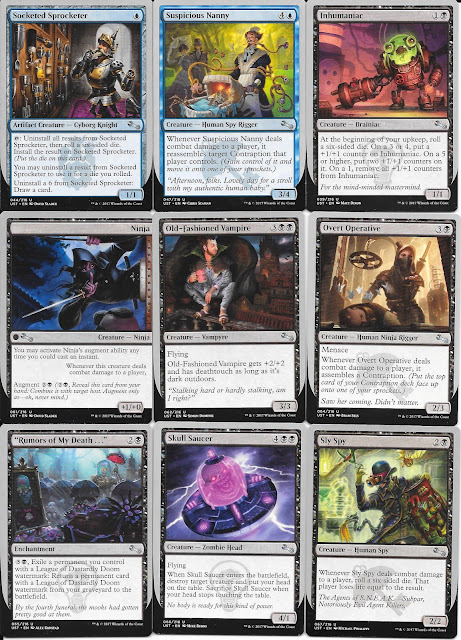 I did keep basically one of each card to stick in my trade pile, just in case. Old Fashioned Vampyre gave me a chuckle. 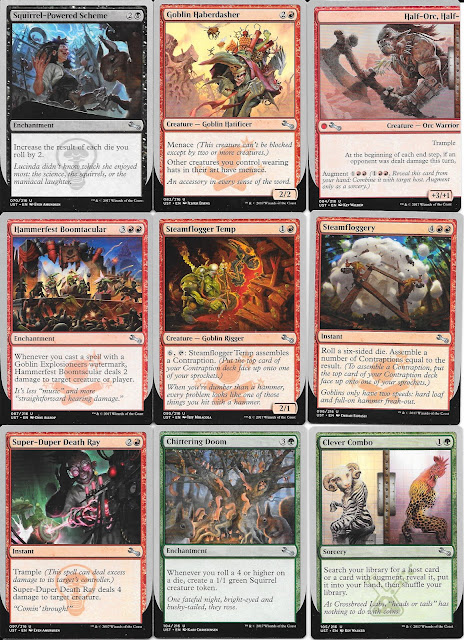 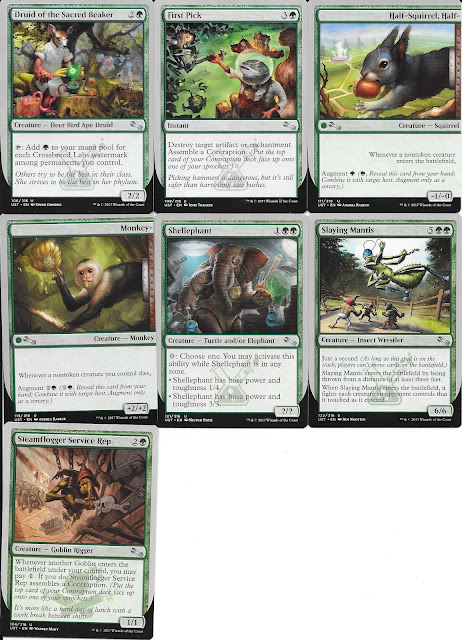 Fun cards overall and as I said, for a penny a card, came out more than alright just on the artifact cards which would have cost me a dime each normally anyway. Might have to grab another 100 on the off chance they are not just Unstable set cards next time.
Posted by CrazieJoe at 8:00 AM