Another Chunk Bites The Dust

Today, we continue on with more 1991-92 Upper Deck hockey as it appears the entire run from 101-200 is here. Actually, the only card missing so far was one of Brett Hull which of course makes me figure, that must be a PC for the last person or two that had these cards.

I can live with that as it was a card I already had anyway. 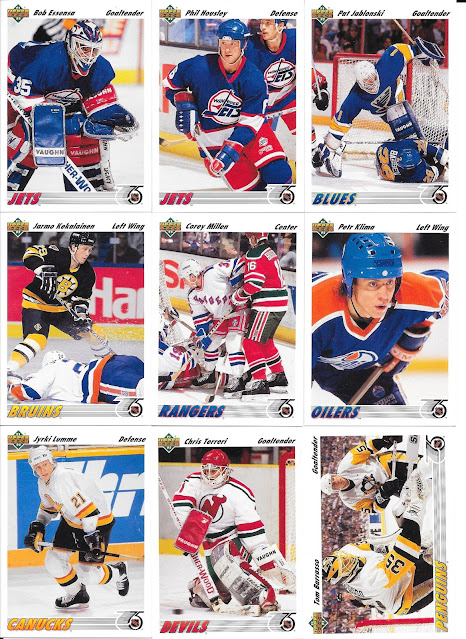 Between the 1990-91 through 1992-93 Upper Deck sets, this is my favourite. The design differences aren't that significant, but the team name across the bottom, and maybe it's the 75th anniversary logo offsetting it on the other side that just makes it a nice, balanced looking front that I like best. 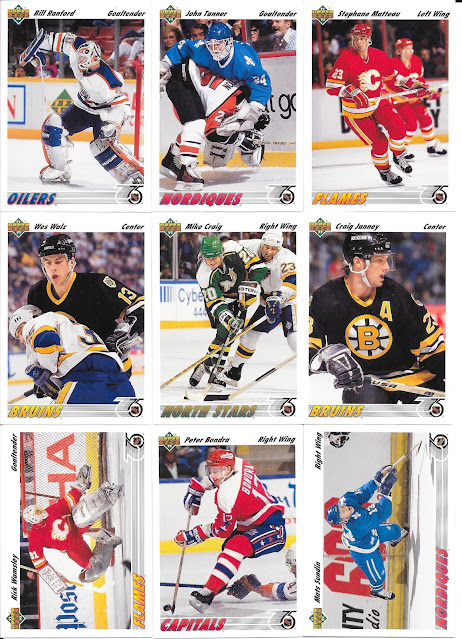 There are still some photos that stand out, like the Ranford here, but not as many as some other sets, at least, that's what I have found personally. 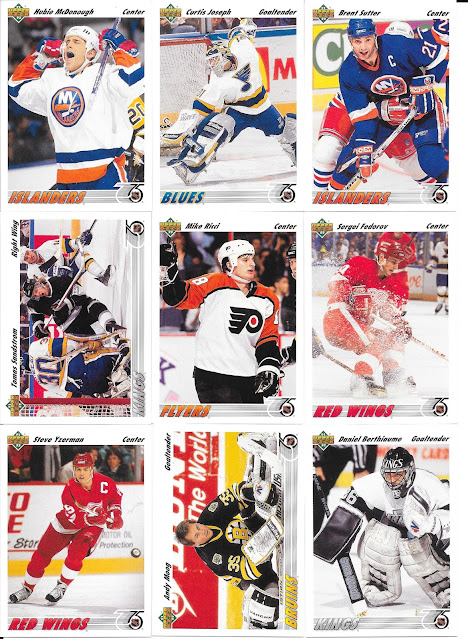 Speaking of good goalie photos, a couple more good ones here with Cujo and Moog. 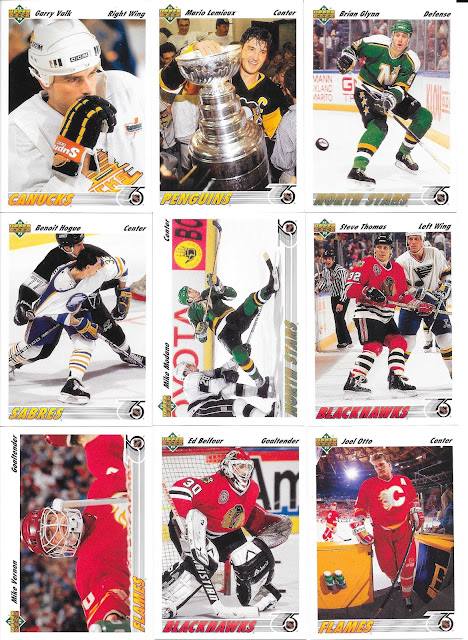 Mario and Stanley - always a really great shot for a card! 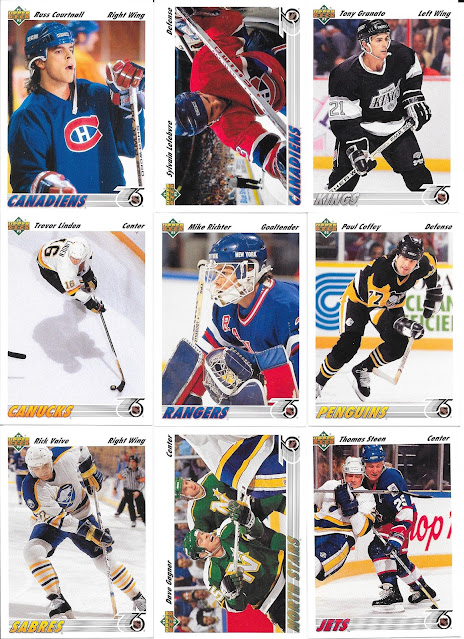 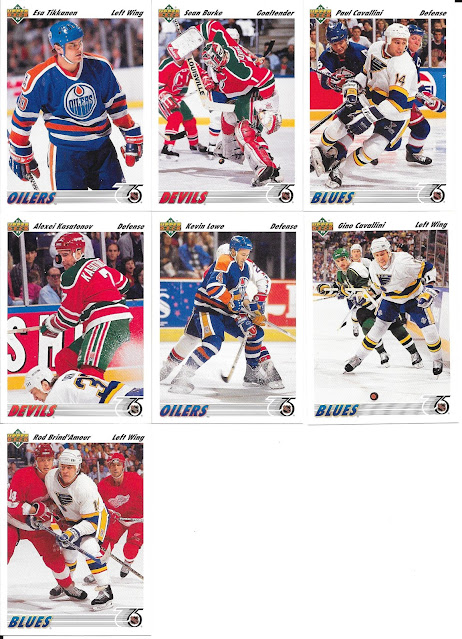 With these, we are down to less than 100 cards left - the first part of the set was definitely the place I was missing most cards. I think I was missing about 200 of the 500 going into this.

Great to also pick up the duplicate Leafs. none are new as I had this complete set, but with completing the actual base set, the extras go to good use. 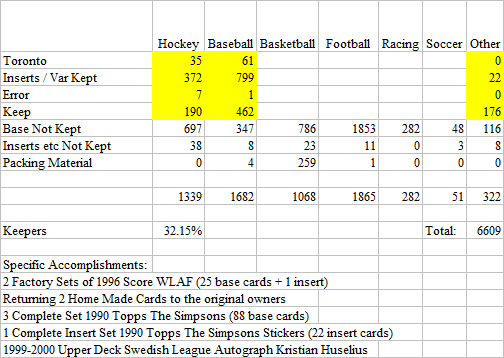 I recently received an order which had included some pre-order items, hence the hold up, from 401games. A few board games, some Magic card single which you will see below along with a few unopened packs, and a Player's Bundle which, for $20 which includes tax, you get 1,000 magic cards in a nice 930 count box on which I figured, why not. That I will save for another day, but let's look at the unopened packs and singles. 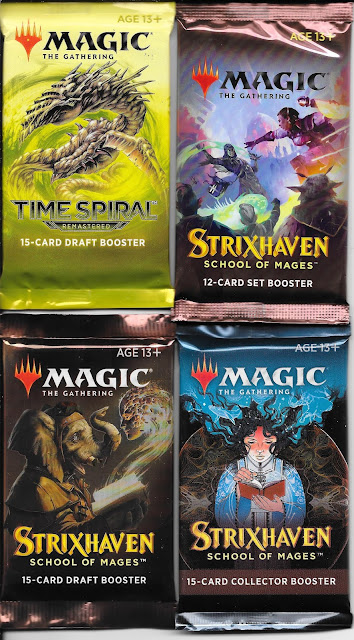 So, another good example of what is going on with cards today - I pre-ordered the single Time Spiral Remastered pack for $7 plus sales tax and they now sell for $11 plus sales tax just a few weeks later.
As for the Strixhaven set, my understanding is that this was supposed to get Harry Potter related licensing and be a whole Hogwarts type crossover, but I gather for whatever reasons, that didn't happen. Maybe that's go the way of a Secret Lair release at some point.
Regardless, these packs have me cover of, I believe 119 of the 132 booster Magic releases.
As for the singles, I was excited because I ordered my first Beta card, which is the second set ever release, so nice old card. 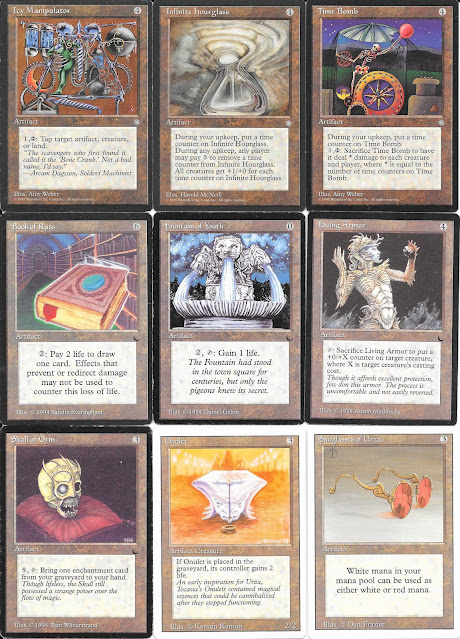 The top row of Ice Age set cards were great as it finished off the 45 card artifact set for me, as for the Beta card... 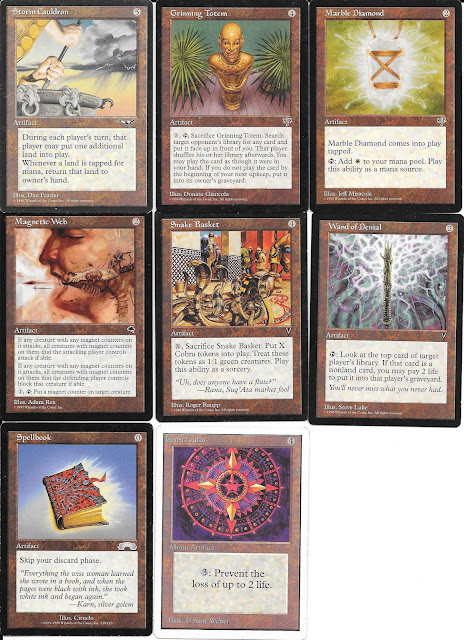 It was supposed to be the Conservator, but as soon as I got it, I realized it was the wrong card as it has a white border and a Beta would be black bordered.
I quickly emailed 401games, knowing for singles I may be out of luck, but they quickly replied the Beta one would be out to me by mail. Fingers crossed it shows up, but that would be awesome customer service! Will let you know.
Posted by CrazieJoe at 8:00 AM