So I thought I would start a new year with a somewhat regular (or irregular?) recurring theme. I always like sharing new purchases, new cards on the blog, but what I have not really covered is parts of the collection and cards I own which I had before the blog, as well as how I present my collection. I figured doing these would help share some of the fun stuff I have and shed a peek into what it looks like.

Nothing too flashy, but always nice to share, and hopefully it may inspire others to share theirs as well - always love having the two way discussion, and to see what others are proud of having and showing.

With Christmas recently behind us, I am sure what I am about to show will change in the next couple weeks, but I thought I'd show these off before any change. What I am showing is the walls around my desk/desktop computer where I do all of my card "work", etc. My space for my collection is all in my basement (no real surprise there I am sure), and this nook around my computer is actually a surrounding space - 5 walls which make up a semi-circle around the front of the desk. Hopefully that makes some sense, but I though I would share a picture of each wall as it stands now, from left to right, while sitting at my computer.

Directly to my left: 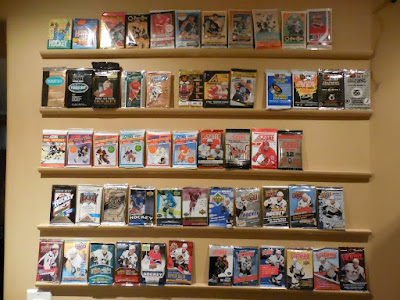 I used quarter round which is normally for baseboards, painted it the same colour as the wall, and then used 3M sticky tape to stick them to the wall (for easy removal down the road) to create these shelves in order to show off part of my unopened pack collection. This obviously is my hockey wall of packs. Rather than necessarily showing off expensive packs, it is more sets or brands I personally attach to more - O Pee Chee, Score, Pro Set (for better or worse), Upper Deck, and for more recent sets where I picked up a bit just getting back into collecting, Victory, Parkhurst and Pinnacle. Obviously some holes in each by far, but I typically try to pick packs up on the cheap so it is more opportunistic than buying based solely on need.

Wall to my left/front: 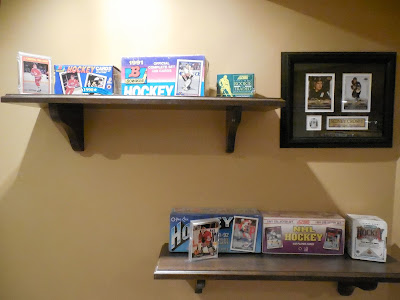 Again, not specifically valuable items, but things that matter to me. Junk wax sets from when I really collected, and a Crosby frame with a couple cards because he was probably the starting force in getting me back into the card collecting hobby.

Centre wall right behind my computer: 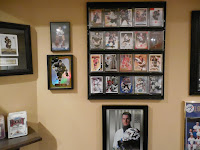 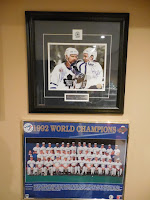 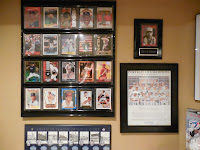 The signed Palmateer postcard is something I had since childhood, though I don't know exactly where it came from (as far as which family member got it for me). The card showcase here is hockey, and some of the inserts from that collection. I haven't updated in a while, but have presented based on variety and the players involved. I even went as far as included a Patrick Roy card...though I think constantly of changing it.

The middle items, of course the big one being the signed Clark and Gilmour photo which was a Christmas gift from my wife a few years ago. The 1992 World Series team photo is not an overly special one, but this is actually something that was left behind by the old owners of our home 8 years ago. I kept it because I had the exact same one years earlier and took it as a sign I should keep it. Again, it signifies an obvious high point of baseball in Toronto also.

The right side of the wall includes a similar card showcase for baseball inserts as well as a Dave Stieb card frame which I change every now and then. Stieb being my favorite Jay all time. Underneath that is a cut out from a magazine which shows the Portrait of Champions artwork, again representing early 90s Toronto Blue Jays World Series team. I never looked at getting a copy of the artwork itself, but back when this came out, cut it out as I liked it, and in rummaging through my stuff in getting the wall set up, thought it would look great in a frame.

Wall to my right/front: 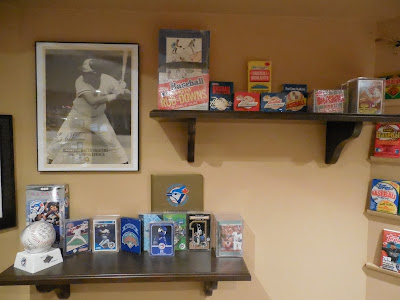 Another item, I'd love to know who in my family got it signed, but I can't remember (I think it was my grandfather), however I know I have had the Ernie Whitt signature for many years. The top shelf is a number of smaller sets I picked up (such as Donruss Highlights 1986, and some 80s Fleer sets as well. Also a box of 1985 Rub-Downs which I never bothered opening, and probably never will - though kept as a quirky item.

The shelf below are a few of the Jays team sets I have as well as a VHS tape and the early 90s cassettes which were released with Toronto Blue Jays songs (which I listed to way too many times at the time). The baseball is one of those "signed balls" which were imprinted with the signatures of all the players - $20 ball, but again, meant something to me as a kid.

Wall to my right: 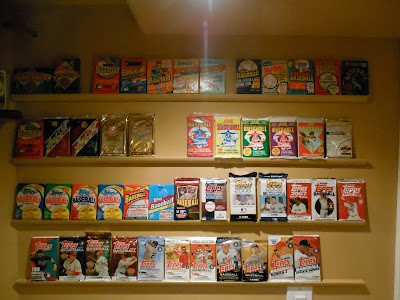 Similar to the hockey wall - here are the baseball packs I have up. Similar to hockey, I have more than what is here, but present those items that matter most to me. Topps is obvious as being the "big dog", and otherwise Donruss, Fleer and Score mostly from the junk wax times I remember so well.

So there you have it - hopefully this provides a bit of insight into my "hobby space" would love to hear/see what others have to share.
Posted by CrazieJoe at 8:00 AM