Who's Next? No, how about Who's Left?

No - not specifically a reference to "Who's Next" as Goldberg would say...but since I made the reference, I am really looking forward to the Royal Rumble this year. I have to finish pulling together by bets and that, but should be exciting. Always fun when my brother and cousin come over and we place a whopping $20 each on the PPV. In short, we put the money in a pot, choose our winners and order entry for the entire Rumble - if you are right, you win.

Honestly, probably more involved than it should be, but that's half the fun (and last year I got 8 of the 30 bank on for their entry place in the Rumble - doubt I will duplicate that this year though). Anyway, will let you know how that turns out and if I come out ahead for the night.

Now that I have completely digressed....making sets manageable...or at least what is left to get, is always a good precursor to actually completing the set.

More 2005 Upper Deck Classics needs met. With these, it makes a need list (again - for the 100 true base which doesn't include the retro rookie cards which make up cards numbered 101-130) of only 8 cards which are:

Some decent names there, and if I were to guess which might be missing, I could see the Griffey of Yogi to be the likely culprits, but hopefully I am wrong on that and we see the rest real soon.

Yeah - three is too many in one pull - though I should count up my points...I would so send in 250 points to see if I got anything - except for the fact it would probably cost me $20 to mail them all in....and since it was for "In The Game" also... 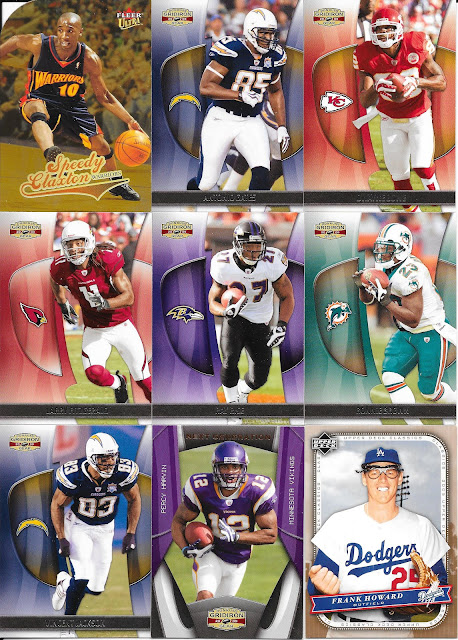 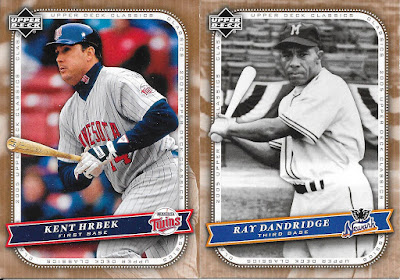 A slow day otherwise as nothing else for keeps, so taking a look at the trade cards - well - still some decent stuff. Four more gold medallion 2004-05 Ultra parallels including a Dwayne Wade which looks pretty nice.

My only other comment is - the Frank Howard photo - he has to be trying to ham it up with the nerdiest look ever between the glasses and smile. Let's just say it helps him exude personality...