Moving past the halfway point...for another set...

With the 2 additional 1991-92 O Pee Chee Sharks and Russian insert cards, the 66 card insert set is now over 50% done. Happy about these from a completion standpoint, but like the Whitney card best among these. The gold and red play off well together, so the Ultra gold medallion parallel comes off looking quite sleek. 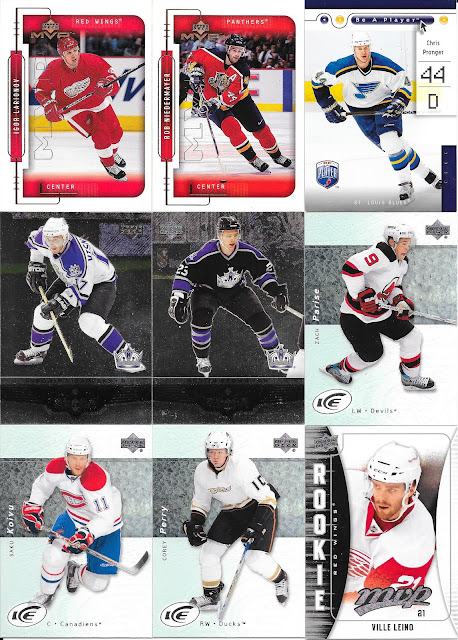 Yay - another new set here with 1999-2000 Upper Deck MVP hockey. Again with the red and gold copper which makes the design look nice and sleek.

I'd also like to just point out that the Corey Perry card shows nicely his time on two different teams - Mighty Ducks and Ducks...it was between 2005-06 and 2006-07 that the name changes happen. 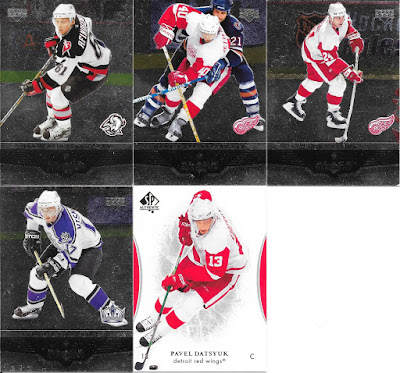 A ZZ Top sighting with 1991-92 Pro Set Platinum and Zarley Zalapski. I remember him best for his name and being in the Super Nintendo Classic hockey game NHL '94. I use to play that game for hours on end and to the point of being able to score at will. I should go pick up a controller and play now...I still have my SNES (as well as NES, Playstation 2, and Wii) hooked up and in good working condition. That said, I'd probably just be disappointed with how good (bad) I would be right now...

On the other hand I should probably start practicing before my son really gets into playing...I should at least be some kind of challenge...