Well, this week is the start of school for the kids - a time of change and getting back into a routing that, for the last two months, has been completely missing from day to day life. So why not throw in a quad war week so I have some more card opening fun since things will otherwise be a bit hectic.

Before we get to the packs, let's take a quick look at the set as a whole.

The set contains 198 base cards, which is a step up from the 132 cards the year before. The 1990-91 set was a big deal and considered high end at the time. One of the few junk wax packages that retained value, the 1990-91 O Pee Chee Premier boxes can still command a price of about $100 per box (about $60 for a complete set) because of certain cards like the Jaromir Jagr rookie, and Mats Sundin rookie. The follow up set of 1991-92 O Pee Chee Premier that we will be looking at - not so much.

With 8 cards per pack and 36 packs, that's 298 cards in a box. Now, with no inserts or parallels, that should be enough for a set, but with how horrible collation was in the junk wax days, no guarantee.

So, going into this, I do happen to have about 12% of the set which includes about half the Leafs, so plenty of room to progress. Also, there were only two package designs as far as I am aware, and I have a pack of each already, so no need to keep any packs aside so we will be opening all 36. Hopefully set completion works better than the 1991 Ultimate set did...

So, let's see what we get out of the first stack... 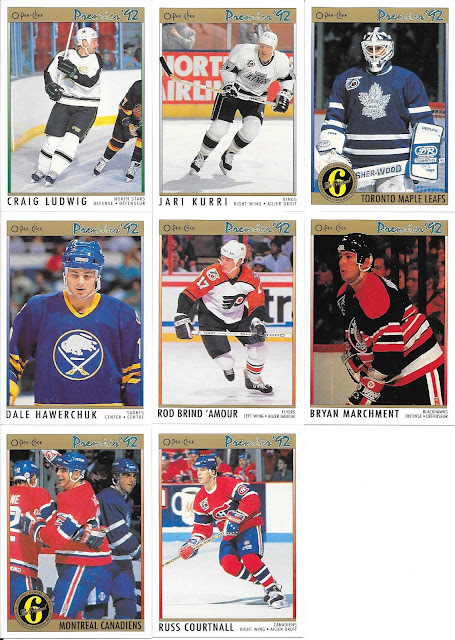 Decent enough star getting a Leaf, though they are represented over-proportionately in the set. 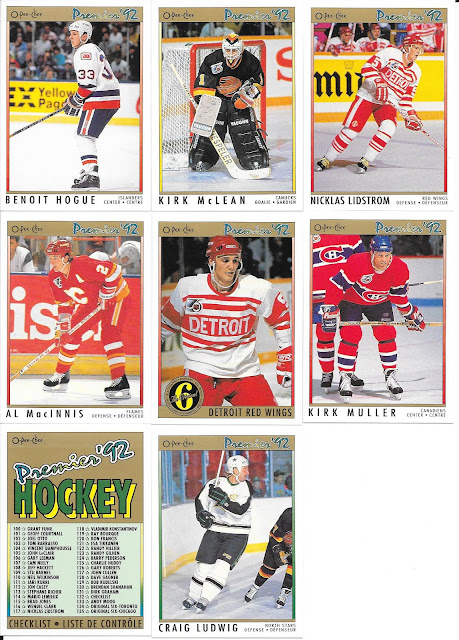 Ok - so second pack and already a dupe - that doesn't bode well. Checklist....check.... 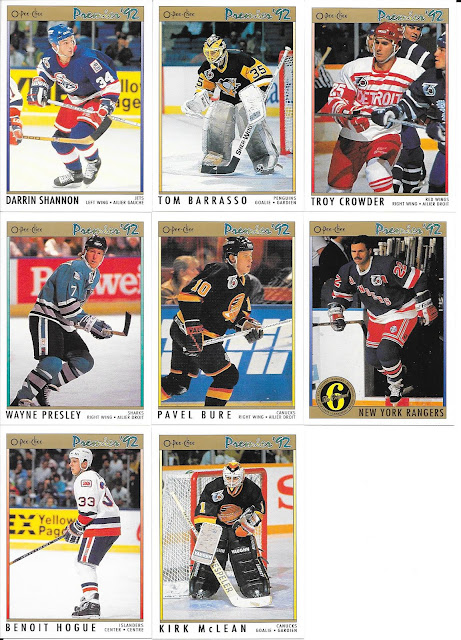 Huh, a couple more dupes...I don't minf the original six subset, though they should have just had these listed in number order, rather than for most of the last quarter of the set, but not all of those cards. 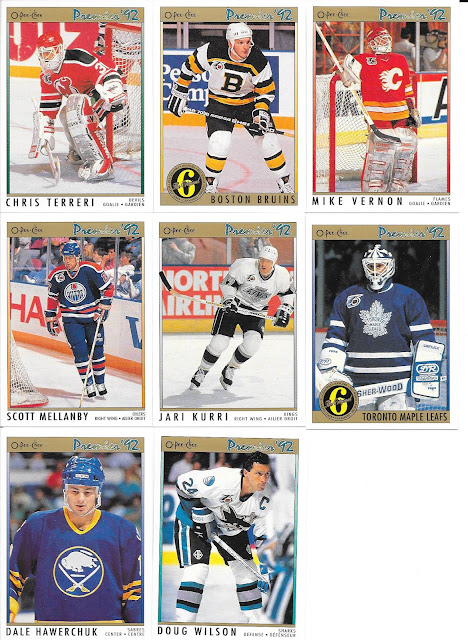 Now we are getting to about half dupes and half new - not good. 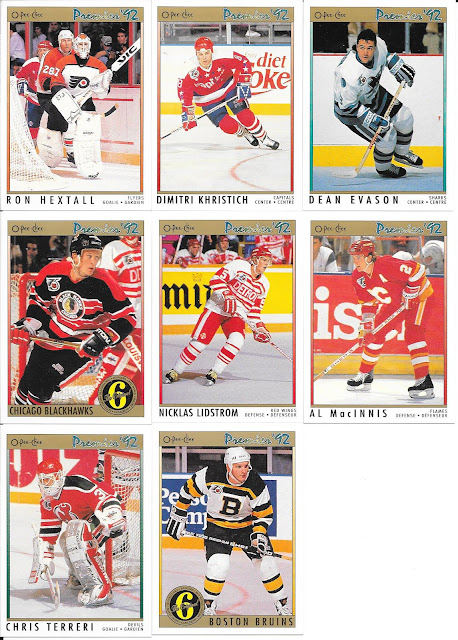 Ron Hextall - a guy who was quite enjoyable for his tough play and harsh temper on the ice - tough guy. 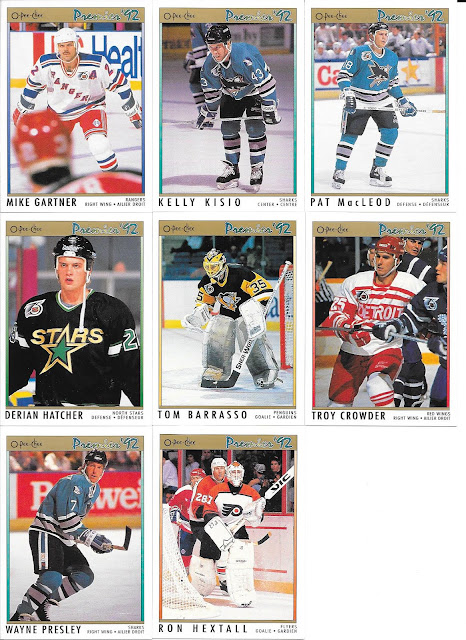 Ron Hextall - a guy who was quite enjoyable for his tough play and harsh temper on the ice - tough guy. Wait...deja vu... 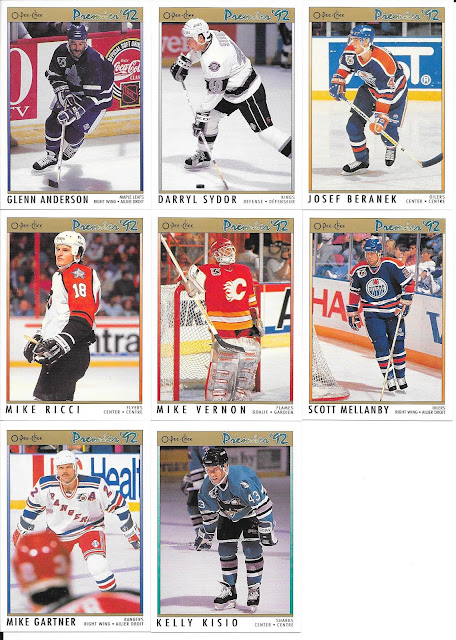 Mike Gartner pre-Leaf days and Glenn Anderson, so kinda like getting a couple Leafs. 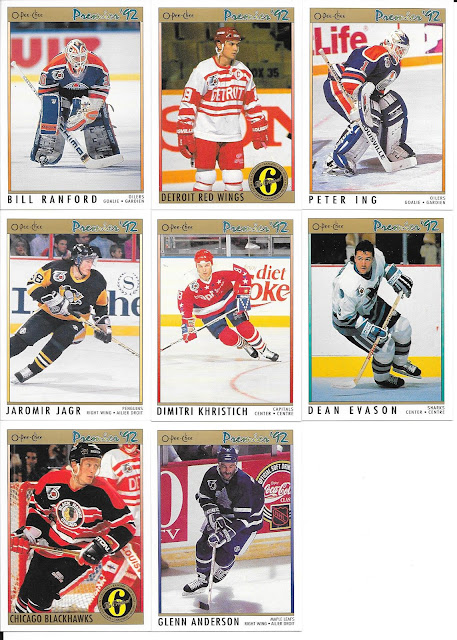 Jagr! Nice to get one, and if I am getting dupes, wouldn't be a bad one to pull again. 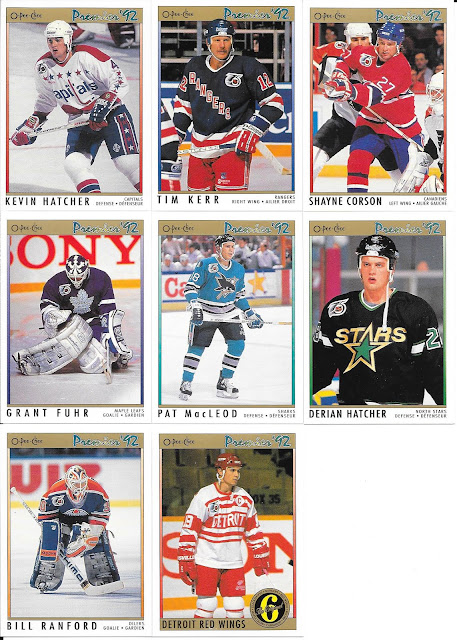 Lastly, a couple great goalies of the time with Fuhr and Ranford.

So with all the duplicates already, even including the 12% I had before, I am still just shy of 30% complete after this one stack - honestly, not very promising. I hope the rest turns out better. Nice to get the Jagr in this stack, but still a long way to go.
Posted by CrazieJoe at 8:00 AM