A new Tulo and Carew

So yesterday Vladdy Jr. played his first major league game. It was a neat moment to watch, and nice to see Vladdy Sr in expo garb watching the game. A decent enough first game getting a double, and a standing ovation for grounding out in his first at bat. No pressure, right?

Anyway...cards...this blaster is going well enough, too bad I didn't pick up a couple from Dave & Adam's last year. Between the nice Cano hit, some nice inserts, and a couple Jays, it's been pretty good so far. 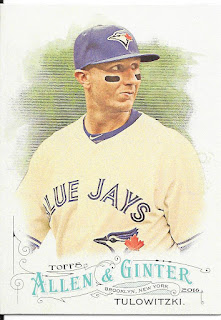 Another Jay is the personal highlight today. The base set Tulo is decent - not sure why the pose specifically reminds me of him - either from other cards, or similar, just looks so "Tulo" for what it is worth - except of course, he seems healthy in this pick, which wasn't the norm for his time in Toronto.

As for the nice Carew - another numbers insert is sweet to me. 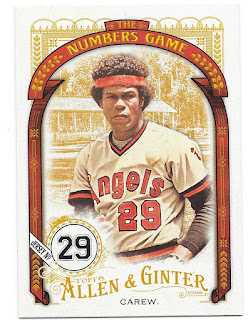 Only complaint is that they didn't go with each card number being the Jersey number, but I get that some may have been a bit weak if done that way.

We even have another A&G backed mini.... 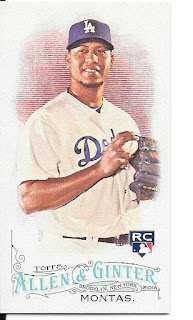 and the base includes...

A Rollie Fingers, and his 'stache...really, just another solid overall pack from this blaster.