Out with a bang

Before getting to the last pack - just a quick touch on this past weekend. Yeah, this is how busy work has been - it's been straight to the cards on the posts, no time for life.

Wrestlemania weekend is always a nice break in the bustle of April. Worked out well as I came out ahead on the betting odds with my cousin and brother. This went well with the *spoilers*.....Lynch win and Kofimania. A great sow for what it was. Best for entertainment, but best for wrestling was NXT Takeover. If you haven't seen Cole versus Gargano - go watch it, a great match and even better if you know and factor in the journey by Gargano.

Anyway, my two seconds of wrestling and life....now back to the regularly scheduled cards...

Here were are, the final pack of the box. It's been a fun box to open and had some decent cards, but we do end with a bang today, which is nice. As there is a memorabilia card, just like yesterday, the back is short from the six cards that are in a basic pack....today, just two. 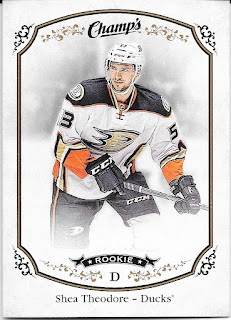 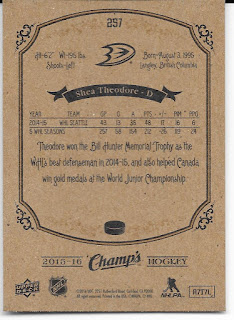 A short print card - nice - though not the one in five pack variety, a level more (the every pack and a half). 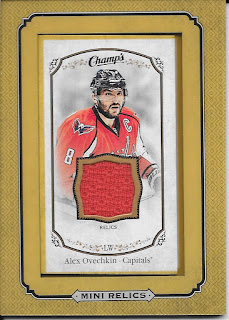 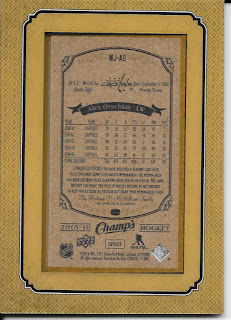 A little off kilter for the centre opening which is evident in the pic, but an awesome card to get. These minis are every 400 packs, so nice to get one, and Ovechkin is one of the best names to get too - not quite on the level of a Gretzky one, but I am more than happy with it. As far as personal fave players - yeah, I am a Crosby guy, but still - not going to say no to this one.

Puts a good end to this box if I do say so.

As I suspected, best box so far. Still a number of blasters ahead in the year, so possibly to get something amazing to topple it, but the Ovi will probably be top three for my pulls this year.
Posted by CrazieJoe at 8:00 AM