Another 15 from Dollarama today, and I'll start with the reason I picked up the pack. 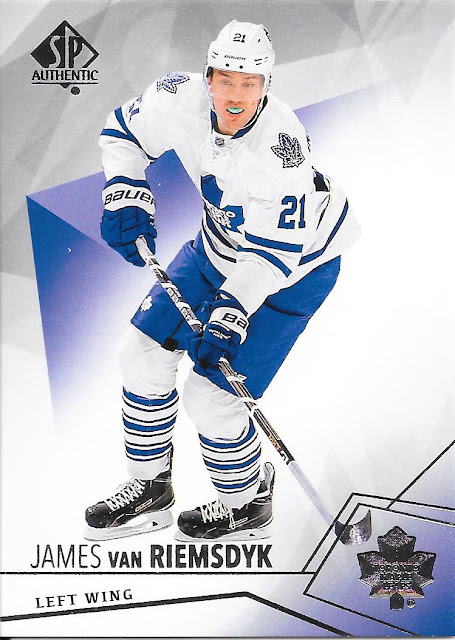 An excellent Leaf card that was a need, and coming out of 2015-16 SP Authentic. A decent enough design for a card where the actual background is completely removed.

Did better than the last as far as keepers for sets I am working on... 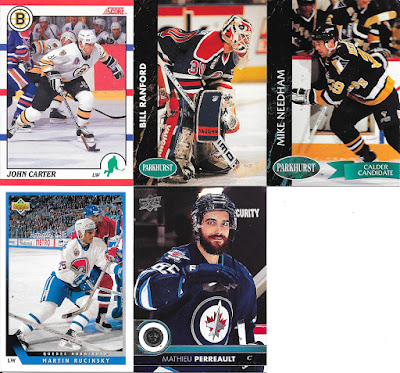 As is typical, some early 90s and something a little more recent. Was a bit surprised I didn't already have the Bill Ranford, but so be it. 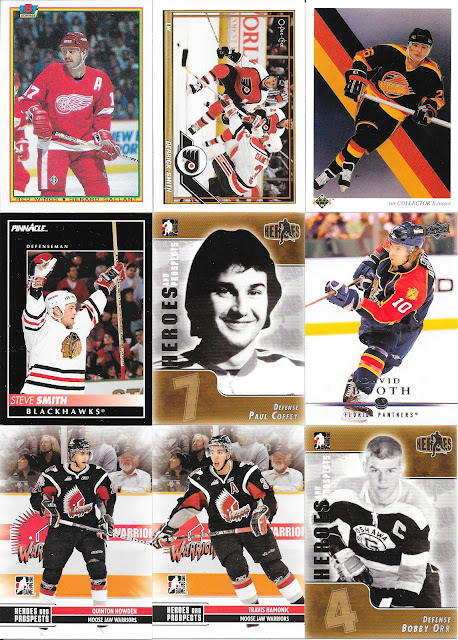 Here we see a few cards which these packs are good for - Heroes and Prospects cards circa the mid 00s. As much as I don't need them, I am never going to complain in getting a Bobby Orr or Paul Coffey card. May not be my thing to collect these pre-NHL (though post-NHL career) cards, but I have a home for at least one of them already.

As for the Quinton - he got to the NHL and played in just short of 100 games, while Travis has been a solid hand for the Islanders and Calgary for about 600 games.

Something completely unrelated, but that I did with regards to my collecting, is I finally went through my Magic unopened boosters to get a checklist for what I am missing, and for value of what I have.

There are 120 sets for Magic which were released since it started (I am not going to count the separate "mythic" or "collectible" packs for the same sets hat have been done for 3-4 sets in the last year). I have 82 sets covered, so just over 2/3.

From a value standpoint, the packs I have would be worth roughly $1,800 based on market value, which seems fair (I think I have probably put in less than half of that as a good handful of packs have done well on value from when I bought them). I won't ever be selling the collection, but good to know if I "had to", it would be okay for what I get out of it.

As for what is left, as I say, there are 38 sets. Of that, 7 are over $100 per pack, which means they are likely a never go to buy. With 30 or so left, and keeping up with what I have, I may be able to buy a few old ones each year and fill in some gaps. Pretty good all in all, so was happy to get my head around that part.

I am going to (as was brought up), put together my top 10 Magic cards list soon which will be best art on artifact cards I have. This way, I can have it be a bit different than others would post, and touch on my own personal collection.

Should have that done in the next week or so and will post it when ready.
Posted by CrazieJoe at 8:00 AM