The last 15 card hockey pack of the year

Yup, last one of the Dollarama 15 card packs for the year as I have a plan for December which I will discuss tomorrow.

As for today, well, no Leafs, but a few interesting insert/parallel cards which will be keepers.

The easy one of the bunch is the 2008-09 O Pee Chee. I had picked up a number of gold parallels from the Santa Lot a few years ago, but this is a Metal parallel. The difference is that the gold are like rainbow parallels in that they have the colour tinge in light instead of just shine. Also, the gold scan more colourfully accordingly.

The first card in the bunch is a Draft Day card which is print run numbered on the back as being 1 of 10,000 - which back in the early 90s was a short run in many ways. The card commemorates the draft 0- an interesting card that will stick around with me for now.

The Schultz is an interesting In The Game insert. A nice topic for an insert being the "tough guys", though the design could be a little less loud.

The other keeper, is the reason I picked up this pack... 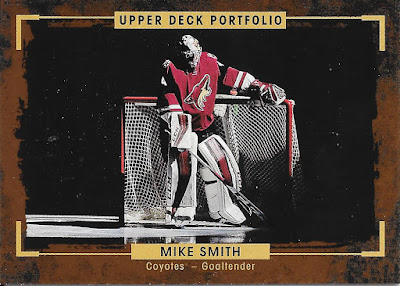 A single Portfolio set need knocked out of the way. The one box I debated back and forth on picking up another of at Dave and Adam's this year, was 2015-16 Upper Deck Portfolio. The reason I decided against it was because of the redemptions being expired, and that I didn't want to get a Matthews redemption I couldn't use, when the price really didn't come down enough to me, to reflect the loss of the redemption on the best cards in the box.

Lastly, the cards that could be yours... 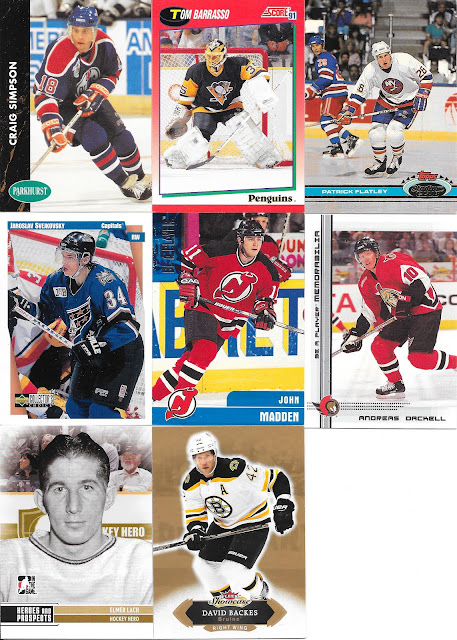 Another Brett Hull card to go with the couple yesterday. The John Madden is interesting as it is the first card from that 2000-01 Be A Player set I have had in hand. The Memorabilia set card is unfortunately really a base card and not one of the "error" cards I have been picking up lately.

Not a bad bunch all in, except for the no Leafs part, but that's my personal preference.
Posted by CrazieJoe at 8:00 AM