Let's go to the Ex

The Canadian National Exhibition which runs the second half of August every year, provides a plac of fun for the kids with the kid rides, entertainment, and interactive shows, while providing a variety of shopping booths for the parents as well as carnival type games and other shows for the adults.

As a family, we typically go for a day each year as it is good family time, and we did again this past year.

This gives me the opportunity to stop by the one sports card and related collectibles booth there. It is the same booth that, a couple years ago, I was able to pull out the remaining 1997-98 Bee Hive cards to complete the over sized set, which I had picked up most of in a random box originally at the Wal-Mart a couple years before that.

One of the things the buy has, which I can pick up quickly, and have fun with, it assorted packs (really assorted|) which go $1 each or 6 for $5. It's a quick way to spend $20 and get, well, almost a month of fun out of. This packs typically run the gambit - all sports basically, though there may be the very odd non-sport card as well, and typically each pack is 25-30 cards, so getting more cards than $1 would stretch at the dollar store.

As it so happened though, there was actually a second both which was a plenty of singles, but happily had a similar $1 per pack bin, and 6 for $5 sign, but instead of random cards, they were stacks of a set - so more in the range of 50-100 cards in a stack, but appeared to be all from a single set.

So, I picked up 6 of these as well, and all together, I have 30 packs for 30 days of December and leave myself New Year's Eve to do my review of goals for the year to see how those turned out.

Heck, sounds like a plan, and of course, as other things pop up, I'll add those in throughout the month, but I always like have a base plan of things I want to get through, and here we have it.

So without further ado, I'll start with the single set packs, and the first up is 1993 Flair.

Not sure exactly why I picked it as it isn't a set I have any cards (okay, I have 1 Jay) from. Only real thought was, they are pretty cards, maybe there is a Jay of two inside, and if not, it is a set I don't see out and about much, so may be good trade fodder. I didn't have my phone at the time, so wasn't sure how big the card set was, so didn't know if one stack would be enough to get me started and add the set to my "to collect" list. Once I checked, getting about 50 cards of 300, it didn't quite hit that mark for me to card to collect it. 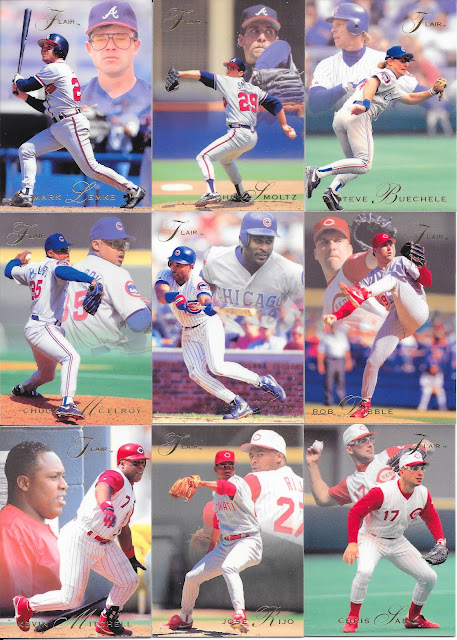 No borders, multiple photos layered over each other, gold Flair lettering and thick card stack all show this trying to be a higher end card set for the time. The photography lay out is nice and seems to be trying to be stadium club in some ways, as it is all about the photo with minimal overlay of name/text. 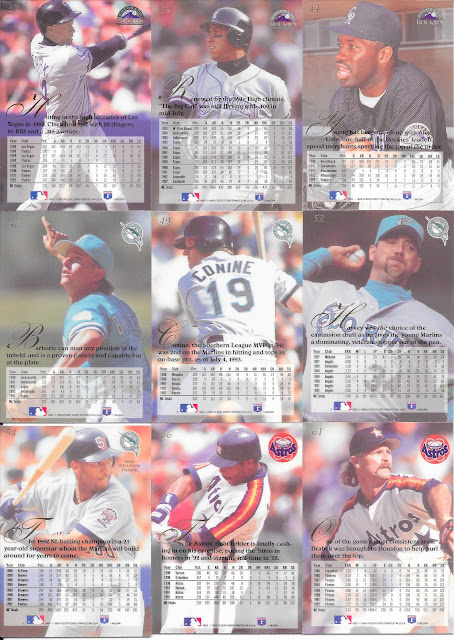 The back design is nice as well with focus on the photography as well, with the stats limited to the bottom half of the card. 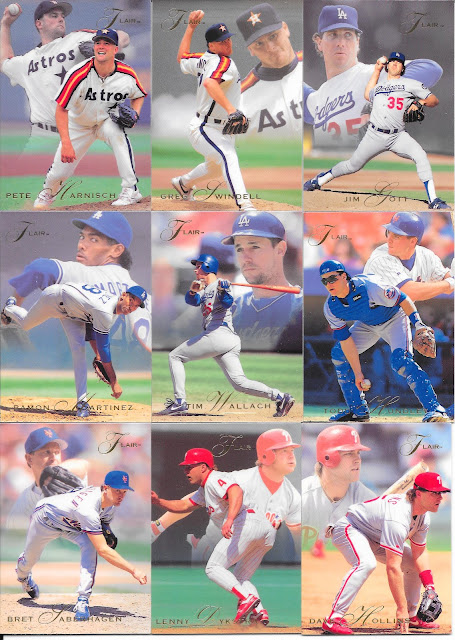 With all the "in the field action shots with no one else in the photo" pictures, as nice as the photos are, they do seem to run together as being too much alike from card to card. 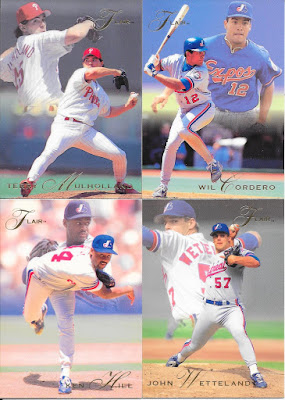 No Jays, but at least some Expos that I know a good home to send them to.

Any other team collectors out there needing any of what they see here, just let me know.
Posted by CrazieJoe at 8:00 AM